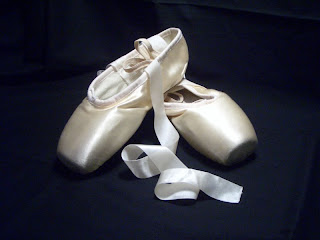 I think being steeped in ballet music for years set the stage (so to speak) for this oboe love. Ballet music is filled with GREAT oboe parts. Tchaikovsky, Glazunov, and Katchaturian wrote GREAT oboe pieces. Before I got to the point where I could say, "Gosh, I wish I could play the oboe," I first filled up with a deep love of those passages that I found haunting and beautiful, or perhaps exotic, or at times even witty. I devoted so much energy to dance that by the time I shifted my focus, which was in college, I probably subconsciously thought I was too old to start anything so daunting as a new INSTRUMENT and honestly never even considered the possibility.

Plus, college put enough on my plate. There was a huge buffet of knowledge and extracurricular activities before me, and I feasted. And there were challenges: I went from being a big fish in a small pond to a decidedly average fish in a large pond. I had study-skill issues that have only recently been better elucidated. Then after college, there was grad school, marriage, parenthood, med school, residency...My (post-)dance card was full.

Throughout those post-college years I would say wistfully when I heard great music, "Boy, I wish I could play the oboe," but with so much to do, I thought of it as a castle in the air, pie in the sky. Never did I think I would decide to stop saying "I wish!" But the time and opportunity finally came, and here I am - an adult student taking up a new instrument with no wind experience whatsoever. All those piano and ballet lessons made for an amazing journey in and of themselves, but they also helped me launch this whole new adventure. Just goes to show, even trees that took root ages ago can bear fruit now.

I danced ballet for about a dozen years. Between the ages of 12 & 15 I went to New York every summer to the Joffrey Ballet School's summer program. I also took class with Wilhem Burmann, whose classes were fast and scary and wonderful and, at that time, not overcrowded. He coached me privately, too, and was one of the most incredible teachers I've had in my life - you know, one of those few you can count on one hand that really made a difference. He believed I had talent. During adolescence, however, I also came to have bulk. I put on extra weight once the hormones kicked in, and my formerly slim dancer's body became an uncooperative mass of adipose tissue that would only stay under control if I ate about 1000 calories a day. My parents must have been relieved when I decided that enough was enough and I was going to go to Harvard instead of trying to starve myself to be a dancer. Now I'm huggably plump and Willie Burmann's famous. All the hottest ballet stars crowd into his class, which I can't believe I had the guts to take on pointe (that is, in pointe shoes), routinely.

After a while in his class, dancing on pointe became easier than off. With experience came increasing versatility and virtuosity. But none of that would have been possible without the dancer's equivalent of an oboist's reed: a great shoe. Dancers are obsessed with a lot of things - body image, certain warm up moves and clothes, and shoes, to name a few. Everyone has shoe practices and shoe rituals. As a child I was trained in the British Royal Academy of Dance system, and we were taught to darn the ends of our pointe shoes. Later, American efficiency kicked in, and most of us just lopped the slippery satin tips off. Some dancers bang their shoes on the floor, some hammer, some break the shanks in half, some cut them, some sew elastics and ribbons on, some just ribbons, some treat shoes in ovens or freezers, some scrape repeatedly at their shoes, all to get just the right fit and feel. Inside every dancer there is an embryonic oboe reed maker.

I'm sure every art or profession has its share of rituals created by its practitioners. I've seen tennis players with their racquets and doctors setting up their central line kits get pretty particular about what they do with their instruments and how they do it. I think ritual even at its most mundane is valuable. It sets a rhythm. It defines the mind's foci of attention. It enacts meaning and infuses physical acts of work with the desires that underlie the work.

I started out my pointe shoe career with Capezios, which were ultra-hard and heavy, and then Freeds, which were a little lighter. Each shoemaker of Freed of London would stamp his individual symbol onto the sole to mark the particular shoes he had made by hand. As far as I remember, dancers got pretty attached to their particular shoemakers. Ballet feet need accuracy to the millimeter. Otherwise they hurt. (Actually, they hurt anyway, but much less so in shoes that are a good fit.) I imagine if I had continued in ballet and continued with Freed shoes, I would have been beside myself with anxiety if Mr. Upside-down-triangle had DIED or something. I had a brief flirtation with Schachtners, which felt pretty good, but when my mom's friend, the late Margot Fonteyn, observed me doing a variation from Le Jardin Animé in them, she thought the shank wasn't quite right for my foot. My quest for "just the right shoe" continued. The moment I tried my first pair of Turning Point shoes by Gamba, size 4 1/2 M, I knew I was home. Each pair fit my feet so well and were so comfortable I didn't even need to try them on after a while and could just order them by mail. No need for nips and tucks. Finding "my shoe" set me free to enjoy my rehearsals and performances with one less thing to worry about. In college I did a lot more modern & jazz dance, and the shoe thing was less of an issue. Now I wonder: is there an oboe reed out there that's a REALLY great fit for me? That would be even better than anything I could hope to make myself? That would emancipate the musician inside that's hoping, with time & learning, to be able to come out?

I have no idea if those Gamba shoes are made any longer. I left the ballet world and all that shoe obsession behind and for all I know these have been discontinued, like two other things I absolutely loved - the milk chocolate-coconut-macadamia nut bars by Godiva, which USED to be available at Barnes & Noble just like the plain milk chocolate and dark chocolate ones, and the White Christmas scented candle at the Yankee Candle Company (they say Snow Angel is almost the same - ok, ALMOST, but not quite). I bet MAC will discontinue Delish lipstick just because I love it. I infrequently wear make-up, so I guess that wouldn't be as bad as the Godiva and Yankee Candle losses. But to discover a reed maker who makes super reeds that play consistently well in all registers, then find oneself unable to get more of those reeds? THAT would be a total bummer! I've ordered a couple from local makers my teacher recommended, so we'll see - the quest for the Holy Grail of reeds is afoot.

P.S. Happy Star Wars anniversary! The fact that I saw it in the theaters when it first came out boggles my mind. I have many a happy childhood memory of playing Princess Leah to my Lukes and Han Solos, invariably played by schoolmates who had to duke it out between themselves as to who would be Luke and who would be Han. And yes, my yaya did do the hairdo on me a couple of times...
Posted by T. at 5:55 PM

I don't know if Gamba still makes the shoe you're talking about. There doesn't seem to be a website for them. But online discount dance supply stores still sell shoes from Gamba called Gamba 93, and Gamba 97. I've even tried on a pair of both from a dance supply store in Sugarland Texas, but they looked really weird on my feet. I have wide metatarsals and tapering toes so it's hard finding shoes for me that don't look weird.