I have to admit I was a little taken aback by the June 4 This I Believe essay on NPR, which described a fine line between settling for and accepting a "good enough" marriage. The author sounds practical, down-to-earth, sensible, but I also thought, if she hopes for certain things in her marriage, why not ask? She writes,

"My husband is not my best friend. He doesn't complete me. In fact, he can be a self-absorbed jerk...On the other hand, he doesn't beat or emotionally abuse me. He doesn't drink or chase other women. He's a good provider. So I'm sticking with him...

"...yes, I'm settling. Sure, I wish my husband would kiss me more often, tell me he loves me every day, and get as excited about my accomplishments as I do. Emptying the dishwasher without being asked and giving me unsolicited foot massages wouldn't hurt, either.

"All that would be nice, but it's not necessary. I'm happy with my husband who, despite his flaws, is a caring father, capable of acts of stunning generosity and fiercely protective of his family. Thinking about him may not set me on fire as it used to, but after 17 years and two kids, our love is still warm."

I guess I have to be enormously thankful. My husband, in addition to all the amazing qualities I wrote about in my Gabriel's Oboe post, is generous with his affections, compliments me and verbalizes his love every day, gets excited when I'm excited about something I've done or gotten interested in, is a supportive partner and devoted father, does more than his share of housework, is noble and compassionate in his work and his attitude to others, does volunteer to give massages, and is indeed my best friend in the world as well as a shameless flirt with me after more than a decade.

I've heard other folks tell me, "Oh, it's so nice that he still tells you you're beautiful (I'm not, actually, but he tells me I am). Mine never compliments me," or "When you two look at each other, the room still disappears," or my personal favorite, my daughter saying, "Marriage is life's great happiness." And when I asked her where she got that idea, she answered matter-of-factly, "You two." I wish I could impart some secret ingredient or piece of advice to her for when her time comes. The things that come to mind about why we "work" are, we make each other laugh; we can cry together too; we learn from each other; we hug each other often; and we pray together. Oh yes, and when we fight, we make up. That always helps. And we try to accept (sometimes even cherish) each other's imperfections (many, in my case, poor guy). I guess that's the same point the NPR essayist was driving at: "happily ever after" comes with a healthy dose of patience, humility, and acceptance. But I don't think "settling" is necessary or something to encourage. Maybe it's all just semantics?

I hope my children have blessed relationships in which their preciousness is SEEN, recognized, and truly, deeply loved.
*** 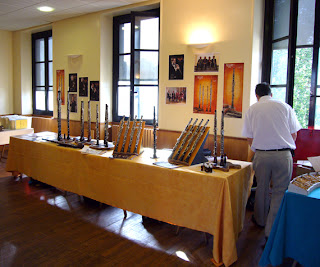 Today's the last day of the IDRS conference. Wish I could have gone this year, even if I can barely play two notes on an oboe! The above photo is of the Fossati table at the conference, I think (got it from the Fossati Paris website). *Sigh*

I DREAM of getting a Fossati E30...We're supposed to go visit my husband's relatives in France this summer, but I'm too embarrassed to walk into the Fossati atelier as a flaming beginner and ask to try one. Their company philosophy sounds so supportive of all levels of musicianship, but I mean, you can just imagine - I walk in there and start HONKIN' around on their BEAUTIFUL, superbly crafted instruments...wouldn't they want to rescue the poor oboes out of my hands and boot me out of the store? That's if they can stop rolling their eyes long enough... :)

When we bought our lovely little upright piano for our daughter, going to the piano store was FUN. It was at the top of a three-story walk-up in an old building. There was a workshop area with piano parts in one corner of the place that looked like an "exhibit for the anatomy of a piano." Neat! My father and I walked in and just started playing. He did some Beethoven, I think, and I pulled out the old Mozart concerto, and we had a blast! "Oh, this one's out of tune, that one's too bright and plinky, but this one's JUST right." You just get a feel for the instrument, a comfortable feeling like coming home and putting on something cozy that fits perfectly, and you hear a sound that's true to what you have to express, and you know you've found it. But I can't go and do that at FOSSATI. Wish I could bring Kyoko along!

I am on call all weekend again. Bummer.

Blogging here at the hospital after an embouchure-destroying practice session in our little lounge. I must be doing something wrong. I am sputtering more now than I used to. My lips got so pooped out after only 45 min. that I had to stop. I guess that's better than my former 20 min., but still, I feel like such a WEAKLING!

Have been idly leafing through magazines on a lunch break. Another reminder to be thankful for anonymity (and for the freedom to leaf through magazines in the first place). I was just perusing an article about the Princes of Wales and thinking back to Princess Diana's tragic death. I remember clearly the moment I heard it on the news. I was pregnant with my daughter and unable to sleep. I went to the living room to watch a little TV late at night, and there it was.

This made me think of that famous recurring question, "Where were you when such-and-such happened?" I started to make a list (as is my wont):

Event (occurrence or report of occurrence) & where I was at the time:

9/11: visiting Mount Sinai medical school in New York City as a 4th-year medical student, on a rotation through their genetics clinic

O.J. Simpson verdict: coming out of the T station at Harvard Square

Shuttle Challenger explosion: being interviewed for a scholarship at what would be my high school

9/11 I was in the music office of our town's university.

Death of Princess Diana: I was also in my living room watching very late night news

O.J. Simpson verdict: I was in the parking lot of a Chinese restaurant with my daughter (who I was taking out to lunch). We had to leave the car, so I brought a portable radio for the walk from the car to the resturant.

Shuttle Challenger explosion: I was at a friend's house watching the television with her and her 1-year-old girl and cheering on Christa McAuliffe.

June 16th 11 years ago was a lovely day - I was proud to be a part of it! I'm happy for you both, having such a close relationship, and such lovely children. Out of the mouths of babes... :-)