Taizé and Talks at Boston College 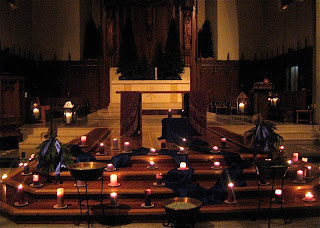 In college the woman who was to become my mother-in-law introduced me and some of my classmates to the chants and meditative silence of Taizé prayer, from the ecumenical Taizé community in France.
The parish we belong to holds a Taizé prayer service every Monday evening during Advent. I had the privilege of being able to take time out of my day to attend and let music and silence wash away all the things that tend to wrinkle my brow.
Even before the service, though, the day was already a gifted one. I attended a presentation at Boston College during which talks were given by the chancellor of the college, Fr. Donald Monan; by Fr. Jon Sobrino, writer and theologian; and by Professor Noam Chomsky. My mind is still processing these rich experiences, but I'll set down the words from Jon Sobrino that are still echoing in my memory: 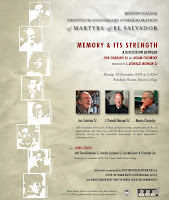 On the suffering poor in Latin America and Africa: "Who defends these people? Who risks anything important to take them down from the cross?...In them, Jesus and his God passed through this world carrying his cross."
On the Salvadoran people: "Salvadorans don't use the phrase 'quality of life.' " And, "Salvadorans don't take life for granted."
On freedom and equality: "Very few people in this world are free to make their own decisions."
I never thought of the world that way. I've always known that very few people in the world are living comfortably, that most of the world is in a state of unending suffering. But it didn't occur to me in the way he phrased it, that this chronic suffering and slow death by poverty are intimately connected with the most basic personal freedoms. He's right. Most of the people in the world don't have much of a choice about anything.
These are perfect words and thoughts to reflect on during Advent. There is a quiet and darkness in Advent that restores the true meaning of the light of Christmas. Advent puts us out in the fields, in the darkness, under the night sky with the shepherds, the untouchables of society, and makes us look up and see glory. The darkness out there can help us realize why it's so vital to renew the light in the human heart.
Christ has left. For many, he was never really here, or his having been here doesn't matter. Those who do find meaning in his life are left with the reality of his physical departure and what remains. We are, in fact, those remains. The fact that there are dark truths in the world is no more God's fault or Christ's fault than it is the fault of the crucified peoples Sobrino talked about tonight. Advent reminds us to shine a light wherever these dark truths would take hold, both outward and inward.
Posted by T. at 10:00 PM