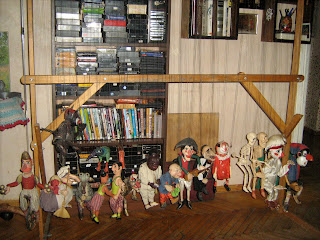 Years ago there was a master puppeteer from Russia who would perform in Harvard Square. Every time he set up his marionettes on the corner of Brattle Street, near the flower shop, crowds of expectant children would gather and sit at his feet, with their parents - just as eager and delighted - standing behind them. Even watching the set-up was intriguing. Each wooden marionette had been hand-carved by this master artist, and the cast of 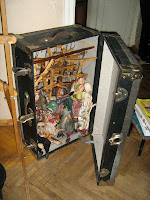 characters included a witch who would approach children inquisitively and sweep their shoes, a devil, a saber-wielding warrior, a violinist, a curious little bird, acrobats, skeletons, clowns, and perhaps best-loved by all, a little character named Doo-Doo who resembled a small elephant whose trunk was in the form of a recorder. Doo-Doo wore trousers, shoes, and a shirt and would walk on two feet, do a little dance, sit on children's laps, lean his head on them, and gaze at them longingly with his adorable, big eyes.
Or rather, these marionettes would seem to do all these things as if magically alive, but in truth it was the puppet master, Igor Fokin, whose expertise and dexterity brought them to life and gave them each a story to tell. It seemed that hundreds of years of the art of puppetry, with its links to theater, childsplay, magic, ritual, story-telling, and fine art, breathed through this man, electrified his muscles and movements and animated the very strings and wood of his creations, giving them each a soul, at least for a few moments. Each character was an individual with a distinct "personality," but Igor's spirit came through all of them in the way they approached the audience - his gentleness, humor, and capacity for delight. 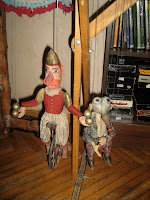 Writes filmmaker Yelena Demikovsky on her website about Igor, "Igor used to say that his first puppets were rather difficult to make. He carved them of wood, injuring his hands frequently. But with time, he became so skillful that he was able to carve wood like soap. Most often, Igor could just glance at a piece of wood to imagine its future character. He'd say, 'I just cut away what's not needed.' " Many artists with real genius describe a similar process: Michelangelo, who would liberate his statues from their marble blocks; writers who describe scenes or characters appearing in their minds almost with a will of their own; composers who hear the music internally and become like conduits for its notation.
Before we had our kids my husband and I would stop and watch Igor's performances whenever we were in the Square. Like the children sitting in the first row we secretly hoped the marionettes would come to us, sit on our laps, play with us, but of course that was reserved for audience members who were children in body as well as at heart. We would watch as the tiniest movement of his hands on the wooden mechanisms he had designed and built for the marionettes, or sometimes just a subtle adjustment of a little finger on one string, would transform a puppet's movements and create magic that would make a child laugh or a grown man smile. Sometimes he seemed to dance with his characters. He would smile at them, with them, and through them. "When we have kids, we've got to bring them here to see him," my husband and I agreed. "They can't miss this." We couldn't wait. 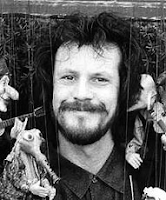 But alas, it was not to be. In 1996, two weeks after his youngest child was born, Igor came home from a show in Harvard Square and died suddenly of a heart attack at the age of 36. Our community was heartbroken at the loss of such a wonderful artist and person. I wrote a letter to his wife expressing my condolences and offering whatever help I could - at the time I was newly married, not in school, with no job, and unsure of what the future held, and I thought I could at least offer to run errands for her and help out in small ways. Somehow we became friends - sometimes you just connect with people, and conversations and confidences flow naturally as if they were meant to be. When she and her kids had to move back to St. Petersburg months later, there was definitely an ache in my heart at their absence.
Igor's wife and I kept in touch off and on over the years - letters, Christmas cards, photos of growing kids. When my family and I arrived in St. Petersburg on this last trip she and I hadn't seen each other in thirteen years. As soon as I saw her and her eldest son on the platform at the train station, though, it was as if all those years had dissolved. We hugged like long-lost sisters and talked non-stop on the way to our bed-and-breakfast. She and her son took us around the city the following day, then invited us to her place for the afternoon, where he offered our kids what we had always dreamed they could experience: a performance by Igor's marionettes. It was magical. Igor's spirit was with us again for a few moments, and all the wonder of his skill and art came alive again through his very talented son. We hung out for hours that day. It was like old times, easy and comfortable. I was so sad to say goodbye.

This is why when people ask me, "What did you like best about Russia?" I cannot say St. Basil's, or Red Square, or the gorgeous cathedrals of the Kremlin, or the Hermitage, or even the most glorious sights of St. Petersburg. I left my heart in Russia because of my cousins in Moscow and my dear, dear friend in St. Petersburg, her children, and the time we spent reconnecting in their homes.
There's a little memorial to Igor in Brattle Square now - a small sculpture of Doo-Doo with a plaque among the cobblestones. At least now when my children walk by it they will understand what a treasure we lost, and they'll know too that friendship, even across vast expanses of space and time, is a gift whose worth can never be measured.
Posted by T. at 7:42 AM

What a wonderful post - I love how you have connected so strongly with so many wonderful folks in your life. SO nevious of your visit to Russia.

I love this! Such a telling post. Even with so much beauty to see in the places around you in Russia, it's always the beauty and love of people that's most important to you.