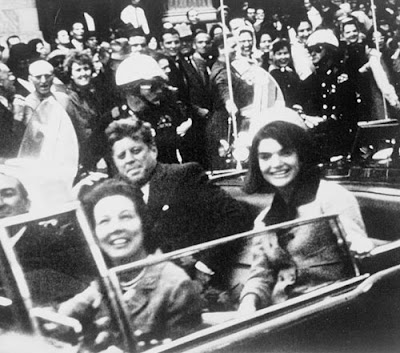 "The first thing [Dr. Robert McClelland] saw was the president's face, cyanotic - bluish-black, swollen, suffused with blood. The body was on a cart in the middle of the room, draped and surrounded by doctors and residents. Kennedy was completely motionless, a contrast to the commotion around him...Dr. M.T. Jenkins, an anesthesiologist, was near the head of the cart, administering oxygen...For nearly 15 minites, McClelland held the retractor as blood ran over its edges. As the other doctors labored on Kennedy's throat and chest or milled around the room, McClelland stood staring at the leader of the free world..." -from an article in D magazine, "The Day Kennedy Died" by Michael J. Mooney
Dr. McClelland has always consistently described a wound in the back of President Kennedy's head through which he observed a bit of cerebellar matter escape. The anesthesiologist, the famous M.T. "Pepper" Jenkins, agreed at first but later decided the tissue must have been cerebrum, not cerebellum - an important difference - and also later changed the location of the wound from occipital to parietal. Those who accept McClelland's version contend that we were not told the truth about Kennedy's assassination. His detractors point to evidence from the four-hour autopsy which indicates a different wound altogether - one that supports the official conclusion that President Kennedy was shot by a lone assassin from above and behind.
Whose version is closest to the truth?
Having been in a number of chaotic clinical scenes, especially those involving tons of personnel, I can understand how people's memories can be a little patchy, erroneous, even conflicting. But the differences in the above two physicians' recollections of what went on during the desperate attempts to resuscitate Kennedy are crucial to the story. Who's right?
Interesting historic note: the only female physician on the scene, Jackie H. Hunt, was - you guessed it - an anesthesiologist.
Posted by T. at 8:20 PM