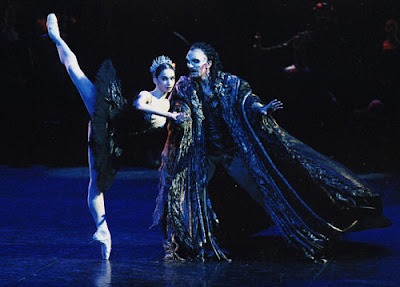 Photo: Polina Semionova as the Black Swan conspiring with the evil Von Rothbart to seduce Prince Siegfried
I finally got around to seeing the much-hyped Aronofsky film Black Swan today. I want to see it again. I just don't know if my nerves can take it.
It was about as creepy as I expected it to be from the trailer. The sex scenes, which I wasn't too thrilled about sitting through, were also about as explicit and gratuitous as I expected (quite). The dancing was predictably strong from Natalie Portman's double (ABT's Sarah Lane) and, to a trained dancer's eye, noticeably flawed but nonetheless respectable from Portman herself. Portman's acting, though, was spot on. She deserved her Golden Globe.
First, a quick review. Black Swan is about a young dancer who desperately wants the lead role in Swan Lake, one of the most demanding roles in the classical dance repertoire. The ballerina must be able to play Odette, an innocent young girl transformed by the wicked magician Von Rothbart into the Swan Queen - the epitome of purity, vulnerability, fragility, sweetness, and helplessness - and Odile, her alter-ego and doppelganger, Von Rothbart's daughter, who embodies cunning, uninhibited sexuality, confidence, invincibility, and heartlessness. The sworn love of Prince Siegfried would have broken Von Rothbart's spell over Odette, but because Siegfried is seduced by Odile into promising his love to her instead, his original vow to Odette is nullified, and Odette's only escape from the imprisonment of being the Swan Queen is to leap to her death.

Audiences have been willing to watch this drama unfold over and over again for more than a century. I think it's because we recognize the two sides, light and dark, in ourselves. We empathize with Odette's sorrow and love; it breaks our heart. But with Odile we enjoy being impervious to such weakness; we relish being able to live freely, skirt danger, gratify our passions. In Black Swan, Portman's character, Nina, is seen as perfect for the "white swan," Odette, but her director is frustrated by the inhibitions - which he clearly feels are sexual - that prevent her from embracing the role of the "black swan," Odile.
The fascinating visual and thematic elements in Black Swan are some of the same themes that make the ballet Swan Lake itself such a crowd-pleaser year in, year out, generation after generation: the struggle between good and evil, light and darkness, and the close-to-home truth that sometimes that struggle is within, with darkness that lurks in every soul. We all have the Black Swan inside us, and sometimes, evil wins over good. That's just reality.
And there's that - reality. What is reality? Can we lose our grip on it, as Nina does progressively throughout the film? Where is the border between creative imagination and the psychotic unraveling that took a hold of Nina and intensified with every passing scene in Black Swan? For artists especially, there's this question: can you create a character or a world with such verisimilitude that you recreate reality, and what price can you, do you, pay for that? Anyone who's over-identified with another, or been involved in an artistic production that dredges up darkness, knows how dangerous that darkness can be when we get close to it, when life and art intertwine and reflect or imitate each other. The darkness can hurt. It might even be able to kill.
As can the quest for perfection. There's a clear message in the ballet Swan Lake that transformation involves, must involve, suffering and sacrifice. It's hard to separate that message out from the real-world process of becoming a dancer. Like the shoes in the familiar beating-of-the-pointe-shoes ritual glimpsed through this movie, dancers have their bodies and spirits smashed time and again against a variety of very hard surfaces - the demand for perfect technique, the absolute requirement to have perfect (read: thinnest) bodies, relentless competition to be the best.
The physical mirror dancers have to gaze into each day is as ruthless as the obsession with body image it engenders, and like other symbols for the search for self and identity - masks, portraits, faces - mirrors figure prominently in this film, as do (predictably) black and white color schemes and decor. There's also plenty of mutilating behavior - directed at self and others - reflecting the merciless hurting of the body and mind to which some dancers subject themselves. Art promotes plenty of obsession in general, but dance in particular seems to foment it to an extreme degree - not just over the art itself, either - and Black Swan holds up a magnifying glass that chillingly exaggerates and distorts this tendency into a dangerous current that sweeps its hapless protagonist into a transformation that threatens ultimately to destroy her.
While many bloggers and reviewers found this film cliché-ridden, I found it compelling as well as disturbing. Very dark, but definitely worth seeing. One of its best (and, I think, unsung) features, which I noticed from the very first moment, is its film score by Clint Mansell. It opens with the famously lugubrious oboe passage that open's Tchaikovsky's Swan Lake - already I was sucked in - but in subsequent scenes Mansell takes Tchaikovsky's ballet and reworks it into a suspenseful soundtrack that retains just enough recognizability to make it spine-tingling and spooky. If you know the ballet score well, you know you're hearing bits of Swan Lake, but it's the scary version - it's very effective. I think this impressed me almost more than anything else about this film. I guess a ballet-loving oboe student WOULD notice something like that, right?
Bottom line: I was expecting a psychological thriller with some decent ballet and some disturbing unanswered questions, and I wasn't disappointed.
Posted by T. at 8:02 PM

Cant wait to see it. Thanks for the review. I love creepy thrillers.