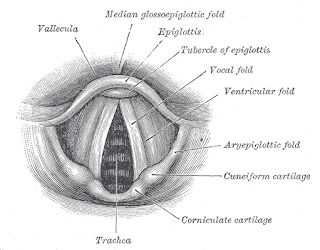 I'm interested in the human voice. Not just because I visualize people's vocal cords and place breathing tubes through them on a daily basis for a living, but also because voices are eerie - part of us, yet sent apart from us when they are put to use, almost like little souls entering the world through our words and sounds, carrying to other people such abstract things as ideas, emotions, meaning, implication. Through them we can create or destroy, make music or noise, send messages or choose silence.
In addition to enabling people to communicate ideas and emotions, to make music, to make significant changes in the world, voices can identify people. No two voices are exactly alike (though there are some people with the talent to create very convincing vocal impressions; last month an interesting article on NPR by Kim Masters described how a deleted scene in the movie Spartacus was restored using Anthony Hopkins' voice as a substitute for the late Laurence Olivier's). I could ponder endlessly the ability of an individual's muscles, vocal cord structures, and respiratory apparatus to produce sounds unique to that individual.

And it's a lot of little muscles!
1. The lateral cricoarytenoid and tranverse arytenoid muscles bring the vocal folds together.
2. The posterior cricoarytenoid separates the vocal folds and allows people to breathe normally.
3. The vocalis adjusts pitch by relaxing parts of the vocal ligament.
4. The cricothyroid muscle lengthens the cords.
5. There are others: the sternothyroid, thyrohyoid, thyroarytenoid, oblique arytenoid, aryepiglottic, thyroepiglottic, stylopharyngeus, palatopharyngeus, cricopharyngeus, inferior pharyngeal constrictor...
But even more than the work of these muscles in concert (so to speak) to produce a unique voice, the transcendent power of the human voice fascinates me. Voices are unique as representations of ourselves in our own absence, because they almost bring us back to life, as it were. When I look at a picture of a friend, or of my husband, or my kids, I smile and reminisce, but I know the pictures are just two-dimensional images of the memories they've captured. When I hear a message on my answering machine, though, or hear a recording of my husband speaking or my children talking or singing, it's almost as if they were in the room with me. Voices recreate a person's very presence and infuse it with a strikingly lifelike quality - again, that eerie way of working in the world, ghost-like, there but not there.
There's been mention in the press the past couple of days of the discovery of the earliest known recording of a human voice. Talk about spectral. When Édouard-Léon Scott de Martinville created his "phonautograph" 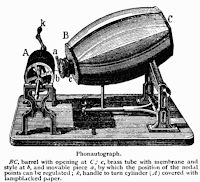 in 1857, he meant it to be a device for creating visual representations of sound waves on paper blackened with soot. Little did he know that 150 years later, scientists at the Lawrence Berkeley National Laboratory would be able to use "optical imaging and a 'virtual stylus' on high-resolution scans of the phonautogram, deploying modern technology to extract sound from patterns inscribed on the soot-blackened paper," as Jody Rosen explains in her article for the New York Times. Now the voice of someone singing a line from Au Clair de la Lune haunts us from the year 1860, a phantasm called forth from the 19th century: the trace of a real person from a past long gone, now resurrected briefly in our living rooms or laptops.
Posted by T. at 7:02 PM

I was thinking about voices the other day too. I think I read an article about a man who had found a recording of his deceased wife's voice and it really brought her back to him. I would imagine that it's a bit of a double edged sword though. Wonderful in that he could remember her more vividly and maybe even close his eyes and imagine her there. But then it may make it even more clear that she is really gone.