Bells in the Air 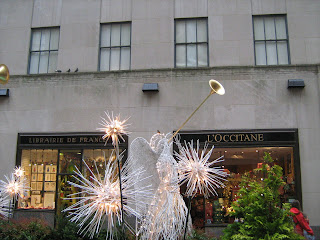 I have started work on the Corelli-Barbirolli concerto in earnest.
I first encountered this work on Youtube, where I saw this young girl holding her oboe practically parallel to the ground, as is often done in Europe. If I had tried that at the time I know I wouldn't have been able to produce so much as a sound!
Mahler wrote instructions for the wind sections to play with bells up or "bells in the air" - Schalltrichter auf or campane in aria or pavillons en l'air - in most of his symphonies, apparently. Not in the first, I believe, but definitely in the 4th and 5th. I have seen solo oboists play like this too, and I marvel at it. How on earth do they play that way? For fun yesterday Kyoko had me try to hold a note while moving my oboe from my usual position (bell down) to having bell diagonally up, just to see what kind of adjustments I had to make with my embouchure to keep the sound going. I didn't find it easy!
As a dancer I can understand why the bell-up position can feel so triumphant, almost glorious. Playing in this stance of celebration and victory, one can almost imagine oneself among the heavenly host announcing wondrous "tidings of great joy." The dancer in me believes in the meaning created by our bodies' movements, by the shapes we make in time and space, and how these can influence our daily experiences. This is why I don't consider admonitions such as "Don't slouch" old-fashioned. Slouching can sap energy as much as holding one's bell up can invigorate one's playing.
This is also why I believe in paying attention to body language as well as words when I talk to my patients, and why, after a painfully long day in the O.R. on this Christmas Eve, the one moment that made it all worth it and that gave me renewed energy for the long drive home was the moment my patient clasped my hand to her chest in the recovery room as she thanked me for seeing her through her surgery. That one generous gesture of trust and appreciation, and the conviction in her eyes as she spoke to me, put the tired feelings, and the aching head, and the beeper beeping as soon as I got home, all in perspective.
It helped me look out at her and at the rest of the world again on this Christmas Eve, rather than at my tiny little problems and at the delicious, selfish self-pity in which I was starting to wallow over being on-call for the holidays. It helped me remember to wish her well and squeeze her hand in return. It helped me enjoy a moment of plunking out carols at our out-of-tune piano with my kids without worrying that the beeper would interfere.
Schalltrichter auf, T. Keep your chin up and your bell in the air.
Posted by T. at 10:40 PM

I can't tell you how much I hate the bells up thing! Or maybe I can.

When I do bells up it means my head has to be way back, in order to keep my embouchure the same. Reading music is horribly difficult for me.

I once asked my husband how different we sounded and he said it was more visual that audial. Go figure.

Ok, dumb question, but doesn't the head back make your airway more open? I don't play oboe, does that make the sound louder or better? I once had a flute teacher tell me that for a concert, you really should memorize your part. I think I quit playing about a week later. :-)

Hi, Megan - you're right, your airway is more open with the neck extended, but somehow doing that affected my embouchure. My lips didn't hold the same shape or apply the same pressure in the same way. I'm sure it's just because I'm a total beginner (still).