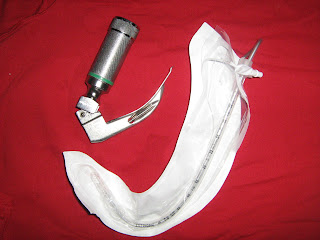 This technique sounds similar to using an elastic gum bougie. Have you ever used one?

QuietusLeo - yes, I most certainly have. The bougie, too, has gotten me out of some tachycardia-inducing situations.

Ramona - I hope so. I feel like the "debts" for those valuable little pointers you carry with you every day for use in times of trouble are almost un-payable; all we can do is pass them on as much as possible! I guess much of what is most valuable about each of our lives lies in the good we pass on to those who come after us.

The Candy Cane intubation! What a perfect Christmas gift. Nice one :)

Education is a gift that just keeps on giving. It builds on our previous knowledge and inspires our current students to teach.