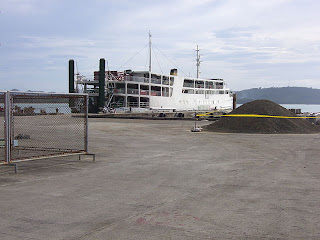 Flor spotted her mother from the ferry, high above the pier. Almost everyone had black hair, brown skin.  A few men in the crowd had colorful bandanas over their mouths and noses to guard against dust and smog. Her mother’s hair was the color of storm clouds.

The crowd seemed restless.  People were milling around, calling to loved ones on the gangplank, texting; but her mother, she noticed, stood perfectly still.

On the ride to the waterfront she had been silent, too.  What could she say?  She had already asked Flor not to go. She had expressed her dread in countless what-ifs.  What if you get lost.  What if someone steals your money.  What if he’s cruel to you.  What if you don’t come back.  A lifetime of worry packed into weeks of what-ifs.  All that was left now was this panicked silence.

The ferry was colossal beside them as Flor embraced her mother on the pier.

“Be careful,” her mother said.

She boarded the ferry and found a place at the railing.  She could see the road they had taken, with green fields on both sides, and in the distance, some palm trees and mountains.  There was rain over there, she could tell - a grey curtain of it between the sky and the mountainside, drifting toward the mango orchards.

The waterfront vendors had long poles fitted with little baskets so they could reach passengers on the upper decks. There was an honor system: pesos in the basket in exchange for peanuts, cigarettes, or whatever else they were selling that day.

Flor rummaged through her bag.  Cell phone.  Make-up.  Wallet.  Snacks. Umbrella.  Some e-mails.  A magazine.  Her copy of the photo and profile information she had sent.  His picture.

He had light brown hair under his baseball cap.  He looked like a baseball player, actually – or at least, what Flor imagined a baseball player might look like.  He was smiling.  He wasn’t handsome like a movie star, but he looked nice enough.  His skin was very white.

She had heard bad stories, of course.  Everyone had.  But she also knew of people who had found new lives with decent men.  She had to hope that this one was as nice as his e-mails.

There was a small commotion on the pier.  Someone was calling one of the vendors, putting something in his basket, pointing up toward the ferry.  Flor looked down and saw her mother gesticulating.

“Over there,” her mother was saying.  Flor could read her lips.  Her mother held her folded hands to her mouth in anticipation as the vendor reached up toward Flor with his pole. Flor reached into the basket expecting yet more food, or a holy medal – St. Christopher, maybe, or her mother’s favorite, St. Jude.

Her fingertips brushed against soft, tiny things, cool and tremulous.  A garland of small, white flowers, so fragrant that nearby passengers had to turn and look.

She wanted to wave one more time, but she couldn’t find her mother in the crowd.  The ferry blew its horn and pulled away from the pier.  Flor searched through the blur of dark heads.  They were getting smaller, less distinct.  She thought she saw her for a moment:  a tiny cloud on the edge of a black sea – but she couldn’t be sure. 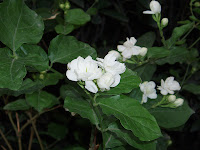 She leaned on the railing and put her chin in her hand. The scent of white flowers broke over her in waves. The garland dropped noiselessly into the water as she watched the people on the shore disappear.

Very good writing; sad and beautiful. Is there a sequel?

Thanks, Hinzi. i appreciate that.

No sequel - this was just an exercise in writing a story under 600 words.

Really good writing, T. For whatever reason, I missed the title when I read and liked the way the situation becomes clear bit by bit, clicking into place with "the photo and profile information." So I'd prefer a less revealing title.

Were you perhaps influenced by Joyce's story "Eveline" here?

Michael, I am completely a-flutter at the kindness of your comments.

Perhaps I should indeed change the title - suggestions welcome!

I now have a bit of an embarrassing confession to make: I haven't thought of Dubliners since I read it in high school, and while I remember that I did, in fact, read "Eveline" and "Araby," the only story that I remember from the collection at all is "The Dead" - and that, perhaps, because I saw the film dramatization of it after reading the book. Still, perhaps some of Eveline lingered in my subconscious mind? I'll have to reread it now! :)

The direct / memorable influences, if you can believe it, were an episode of Judge Judy, of all things, as well as an encounter with a patient under much happier circumstances.

Hi again - just took down the revealing title. Both Mr. T. and I agree with you on the one that was in use. Thanks for the tip!

Well that might have been a bit too good. Because you must know that now we are all waiting for what comes next! ; )