A Mass to Remember 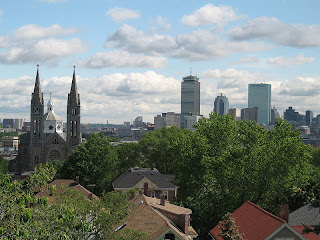 ***
This scripture passage is the heart and soul of Catholic social teaching.
I have heard and read it many times, but today I could not help but hear in it a lambasting of many Republican policies and attitudes toward the poor by Jesus himself.  There is no ambiguity here; all are called to help the unfortunate in concrete ways, to give willingly and without preconditions.  Period.
This dimension of Catholic faith, the emphasis on social justice, energized the life-changing legislative career of Senator Ted Kennedy.  Fr. Mark Hession of Our Lady of Victory Parish in Centerville, MA said during his homily, "These works of the Kingdom were daily concerns of the public life of Senator Kennedy."  I am so glad that reading was chosen as the liturgical centerpiece of his funeral Mass, which I "attended" from my living room via CNN's live coverage.  (Click here to see a pdf version of the Mass program.) 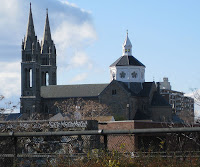 I found Senator Kennedy's Choice of Mission Church - Our Lady of Perpetual Help on Mission Hill - less than half a mile from where I received my medical training - deeply moving and fitting.  It may have been a security nightmare for the Secret Service to prepare this place to receive four presidents and two thirds of the United States Senate, but it was the perfect place for Ted Kennedy's funeral Mass.  The basilica is at the heart of a community that embodies so many of the concerns of his career - civil rights, access to health care, social justice.  It had personal meaning for him, too:  he prayed for his sick child here.  Fr. Mark said it best during his well-written homily: "The senator's choice of this church for his funeral mass resonates with the meaning and the purpose of his life and work."
What a beautiful Mass it was.  I couldn't help noting the similarities between the Aquinos and the Kennedys, especially when Donald Monan, S.J., Chancellor of Boston College, opened the Mass with a description of the way private prayer was the secret strength behind Ted Kennedy's public life.  The readings chosen for the Liturgy of the Word  - Wisdom 3:1-9, Psalm 72, and one of my favorites, Romans 8:31-39 - conveyed perfectly the emphasis on justice and trust in God that has imbued the lives of the Kennedy family. Susan Graham sang Schubert's "Ave Maria" more exquisitely and expressively than I've ever heard it sung before, with perfect dynamics and consummate vocal control.  Literally pitch-perfect.
Most unforgettable and  moving, I think, have been Vicki Kennedy's extraordinary and exemplary grace and dignity throughout this week of public grieving, and Ted Jr.'s story of how his father encouraged him and helped him climb an icy hill shortly after he (Ted Jr.) lost his leg to bone cancer.  All the stories - moving, funny, striking, redemptive - put a human face on an iconic figure.  Ted Kennedy worked hard for the people, cared about individual suffering as well as global, and tried to be a good father to his children.  Instead of retreating from life because of past failures, he moved forward and tried to be a better man.  He worked tirelessly to better his country.  I agree with what President Obama said in his eulogy - we should celebrate what he became. 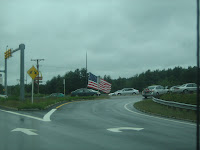 After the Mass we began our drive to New Hampshire for a weekend of rest.  We glimpsed Kennedy's motorcade on its way to Hanscom Air Base as we waited to merge onto 95 North from Route 2.  As we exited 93 North in New Hampshire, we saw a large American flag at half-mast at the first intersection.  Now we are watching the ceremony at Arlington National Ceremony.  We've heard the final correspondence between the Senator and the Vatican.  The gun salute and Taps just ended.  His grandchild is describing sitting on the porch with him in the early morning looking out over a sea of "freedom and possibility":
"We talked and we talked, and the world was just right."
Rest in Peace, Ted Kennedy.
"Eternal rest grant unto him, O Lord
and let perpetual light shine upon him."
- from the Prayer for the Dead
Posted by T. at 5:44 PM

Wonderful post,beautifully written as always, a fitting tribute to one who became a great man.

Beautiful post T. I was so moved by the service. Everything. From his choice of the church to the family coming out and greeting so many people over the two days.

From what I understand, he planned everything. He knew that by choosing that church, it would get recognition and just basic repairs that they hadn't been able to afford. And in my head, I still keep hearing the call and response portion where everyone says "Lord hear our prayer." There's something so comforting about that.