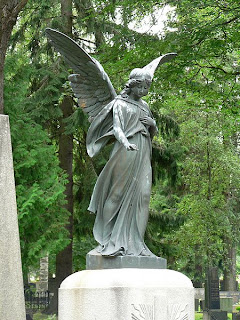 Recently a patient was describing how much he had enjoyed spending time with members of the film-making industry in L.A. "It's so great to be around be people who love - absolutely LOVE - what they do for a living. Everyone -the actors, the directors, the make-up people, the camera guys - they all LOVE their work! For most people, their jobs are just...jobs."
People who are able to do what they love most in the world for a living are truly fortunate. Most people in the world don't have that opportunity, either because of lack of talent or lack of resources. But there must be ways to find some fulfillment even in "ordinary" jobs.
Recently I wrote about going through a slump in terms of my work satisfaction. I've been trying to turn my attitude around, and I'm finding that cherishing small / hidden moments, and focusing on those rather than on frustrations, can be really helpful.
One afternoon I brought an elderly woman with a potentially difficult airway and not one but two heart problems, one of them fairly risky, to the operating room. This was someone for whom every cubic centimeter of drug administered had to be given gingerly and deliberately, each drug with a very clear and concrete purpose. Most people can be given a variation on the same combination of medications for the induction of anesthesia: a syringe of propofol, some muscle relaxant, maybe a little narcotic. For some, though - either because of their medical history or because of surgical issues - "the usual" isn't appropriate. For this woman, the usual mix could have been quite perilous.
I had goals in mind. I wanted to get her heart rate below its rather rapid baseline. I wanted her pressure not to fall sharply below a systolic of 120, even 130 if possible, during induction of anesthesia. I chose my drugs carefully and I gave some of them practically a cc at a time. As she fell into unconsciousness I watched as her vital signs did exactly what I wanted: heart rate down to the 70's, blood pressure 132/77, breathing tube placed smoothly (with emergency airway equipment at the ready), patient completely safe every moment of the induction. It was one of the most elegant inductions I had done recently.
No one knew or understood my plan or what I was doing differently. No one realized the potential dangers I had avoided. It was a job done completely anonymously, and not even the patient would ever know the kind of moment-to-moment attention her challenges and her anesthetic demanded. Surgeon walked in, did his thing, and left with a quick thank-you to the team, also unaware of the meticulous care taken to protect his patient with her individual medical issues and needs. To everyone else, it was just another anesthetic.
But not to me. And you know something, the fact that I and only I knew that was strangely comforting. It's like producing a poem or painting or short story that you know will never be seen by anyone else but feeling wonderful about it anyway, because you created something beautiful, and it's yours. Sometimes the satisfaction is so fulfilling that external affirmation becomes completely unimportant - in fact, unnecessary.
It's a good feeling.
Posted by T. at 2:53 PM

good! wish you more such moments of satisfaction

That's exactly what a perfect anesthetic is like! It is a beautiful thing, especially in a complicated patient like that! I love hearing you describe it. Bravo to you for reaching a new level of internal satisfaction- I'm still constantly annoyed at how little people understand of what we do, even other doctors. Get this- I had a nurse the other day ask me how long my liver transplant case went, and when I told her 11 hours (40 units PRBC, 43 FFP, 5 platelets, Factor VII, VF arrest x 2)- she asked me, "Wow, so you just like, sat there the whole time?" The problem is that there is really no way to win in this situation- if you over react, you come off as a jerk. Sigh. At least YOU know that I didn't just sit there all day, right!?

Varsha - thanks for the well-wishes!

Mommydoctor - i am in TOTAL AWE of you!

Thanks for giving a peek at what your job is like...incredible description. I have to tell you, I have liked every anesthesiologist I've ever had (with the exception of one and I've had 5 surgeries). I never take for granted what you do, but I didn't realize how extremely thoughtful you have to be in the whole process. It's comforting to know that you care for each of your patients so well. Oh, and in case you are wondering about the one I didn't like so much...
I had a somnoplasty and an UPPP procedure. Normally, when I come to after a surgery, I never see my anesthesiologist. This one was waiting for me to wake up...waiting to tell me I threw up blood all over him during the surgery. Obviously I couldn't speak very well and I was a bit woozy, but I apologized (on a piece of paper he gave me) anyway and he left. I thought to myself later,"Why did I apologize?? I wasn't even concious." I felt bad about it and a little embarassed even though I don't remember it. I am still thankful that he was able to keep me unconcious though.

T.- the feeling is mutual! Keep up the great writing and doctoring!

so truly said...you really are a good human being...i believe what every anesthesiologist should aspire for.

T, that was awesome. You're right that a job well done in anesthesia means not calling attention to yourself. Normally the only time we get any acknowledgement is if there is an (alleged) anesthetic complication. In theater, we're like the stage managers. The stars on stage get all the accolades but without competent managers, the whole production would fall apart.

Beautiful! This post has left me with a smile.

You girls ROCK! T--I love how you make medicine sound poetic. Mommydoc--Even I, a lowly family doc, could tell you weren't sitting around all day by those stats! I'll say it again, I really appreciate you anesthesia folks and your Versed (and other drugs, too, I suppose, but after the Versed, who the heck cares?), though thankfully I've only rarely required your services.