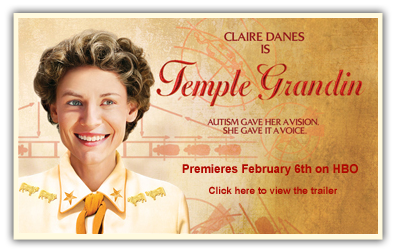 "I believe that doing practical things can make the world a better place."
I first learned about Temple Grandin through NPR's This I Believe series. Now the outstanding HBO film Temple Grandin has brought her experiences as a high-functioning autistic person, her revolutionary creative and scientific work in the humane treatment of animals, and most wondrously, her mind, to life.
Claire Danes is phenomenal in the title role - that, we could have expected, though watching her become Temple Grandin physically, intellectually, and emotionally before our eyes is astonishing even beyond those expectations. But equally impressive is the way in which this breath-taking film captures the lived experience of Grandin's unusual mind. My husband and I were stunned and deeply moved as we watched it last night.
The film Temple Grandin manages to use cinematography to manifest intellect. Sometimes the camera cuts away temporarily to the very concrete images that come to Grandin's mind when people utter words like "miracle" or "animal husbandry," giving viewers an idea of the way she really does think in pictures. Camera angles and direction are used to help us understand her perceptions of the world around her, the discomfort of certain stimuli such as the clatter of eating utensils, the brilliant, intuitive insights she had about the mathematical relations of objects and their mechanics. Small moments convey a lifetime of struggle to understand humanity - her own and others', as well as the inhumanity she witnessed. As she says in the film, "Nature is cruel, but we don't have to be." 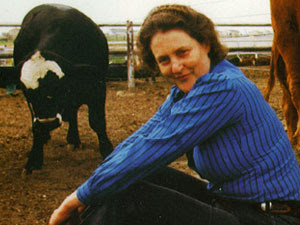 Since I learned about her, Temple Grandin has been an inspiration to me. I am not autistic, but I have had occasion to seek neuropsychological testing for certain cognitive challenges - and it was almost a relief to be told I had outright failed a couple of measures, so I could say to the people who had seen me get straight A's for much of my life and couldn't believe I might have a problem, "See? The world isn't always simple for me! There's a reason I get stressed out!" I grew out of my childhood echolalia and sensory integration issues (for the most part), but I often still feel like a mind in cognito, an individual with subtle issues and challenges passing for "normal" by being capable of achieving things.
Nonsense, some people might be tempted to say; you graduated from medical school - how can you talk about cognitive problems? To them I say, do you have any idea how many people struggle through med school, and succeed and become great physicians, with learning disabilities, mood disorders, ADHD, and other perhaps undefineable brain issues? Don't you realize how ways of thinking, perceiving, and processing just can't be so easily boxed into constructed categories?
I found myself able to relate so well with the perceptions of the world brought to life in the film and in Grandin's own words - especially the "thinking in pictures" (though how I wish I had her photographic memory!), discomfort and stress with certain kinds of sound and touch, and anxiety (and seeming "lost") in new environments or with the way people gIve directions or explanations. Grandin's story reminds me that none of us is alone in our struggle to relate to the world and each other; that there are those like her who have suffered much more and then achieved much more; that we all occupy an intellectual spectrum that connects us much more than it divides us. In the end, it was a story of hope - subversive, uplifting, challenging, and timely.
___________________________________________________________
Just out of curiosity, I took the non-diagnostic Autism-Spectrum Quotient found here. "Average" score was 16, likely to fall on autism spectrum was 32. ("Eighty percent of those diagnosed with autism or a related disorder scored 32 or higher. The test is not a means for making a diagnosis, however, and many who score above 32 and even meet the diagnostic criteria for mild autism or Asperger's report no difficulty functioning in their daily lives.")
I scored a 30, probably kept out of the spectrum by a "normal" empathic ability, ability to process noverbal social cues, and perhaps my love of fiction. When my husband looked at the test with me and gave the answers he thought I should have given, I scored even higher, 31. Good thing he makes such a good "hug machine." :)
Posted by T. at 9:18 AM

I'm really looking forward to this movie, since so many people in my life are somewhere on the autism spectrum, which I believe extends outward from the common diagnosable upward boundary.

The spectrum was kind of like the normal place where and when I was growing up, even if it wasn't understood as such until 20-odd years ago. I was the odd duck in my family. I have always been drawn to people on the spectrum, particularly people on the undiagnosable edge (like in the 30s on the link on your post), but I have never been able to learn how to acquire their (your) strengths.

My mind continues to be an interrelated quagmire of illogically connected pieces of material, and my memory is something not to be trusted. Ever.