If I Were a Physician in France 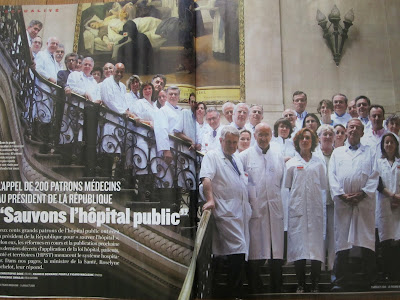 On my way onto the plane for my recent flight home from France I picked up a copy of Le Figaro thinking I might enjoy the article about actress Sophie Marceau, who was on the cover of EVERYTHING while we were in France in celebration of her turning 40. I did enjoy catching up on Marceau - I still remembering watching La Boum in my high school French class - but I couldn't help but notice a two-page spread showing a large group of physicians in their white coats standing on the staircase at the Université Paris Descartes - a staircase I remember descending last year after my visit to the Musée d'Histoire de la Médecine.
It was the central image for an article about physicians writing a letter of protest to Sarkozy regarding French health minister Roselyne Bachelot's healthcare reform bill. Whether it's in the U.S. or Europe, it seems, health care reform must provoke controversy! The article discussed the doctors' objections to the allocation of decision-making power exclusively to hospital chief administrators (CEO's / CFO's), to cuts in staffing and services, and to decisions about patient care being made based on financial rather than medical criteria. Their battle cry, "Let's Save The Public Hospital," pointed to the increased economic burden that the current bill implied for teaching hospitals carrying the brunt of high-acuity, high-volume patient care.
Physicians weren't the only professionals openly protesting Bachelot's bill. Nurse anesthetists blocked train tracks at the Gare Montparnasse last May to protest the bill's failure to recognize their specialty (France currently has 7500 nurse anesthetists). 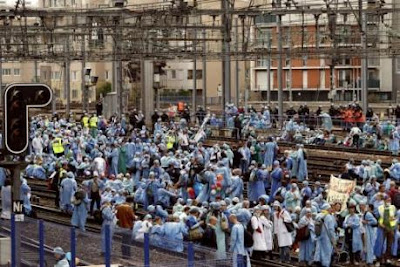 Though I am much less familiar with the French system than the American, the article made me think about how my life might be quite different, both as a physician and as a patient, if I were living in France, as I have often fantasized.
If I were a physician in France I'd be making less. Primary care physicians in France get $32 for consultation ($37 if it's a house call), whereas Americans under Medicare get $92 for the first visit and $125 for a "moderately complex consultation." French Anesthesiologists make from 4000-7000 euros a month, according to one website.
But...
As a physician in France I wouldn't have crippling student loans to pay back (the government would have paid for my education), and my malpractice costs would be significantly lower. I'd also be able to make decisions as I please without being muzzled by an insurance company - though as an anesthesiologist in the U.S. I can already do that; it's usually primary care physicians in American who have to deal with the frustrations of having to adjust medical decisions based on insurance company restrictions.
In France I would, however, have had to have been in a science / medical track for most of my scholastic career, starting in high school, and would probably never have been able to do what I did in the U.S. - major in literature, then switch to medicine after university. I'd have had to do a lot of demanding oral exams - not just the few I got through here in the States. I'd have had my exam results posted publicly and my class rank determine my specialty choice (which does occur to some degree in the U.S., but less stringently).
As a patient in France, I'd be entitled to health care, but I'd perhaps be paying higher taxes, waiting longer to see specialists, and maybe even having to travel out of my home area for access to certain services, such as a labor and delivery ward. In either country, the system is tiered, with people able to pay for additional private insurance getting access to more services.
I don't think there's any perfect training system, practice situation, or place to be a patient, but as both a physician and a patient I'd probably want for myself the flexibility of an American education system coupled with the universal access enjoyed by the French. I dream of living in some idyllic little French village without worrying about whether I can get care when I need it; then I watch shows like BostonMed, and the familiarity of the American system wins me over all over again. The problem neither country seems to be able to solve is the high cost of universal health care; Assurance Maladie, the French state health insurer, has been "in the red" for decades. I'm interested in seeing what both countries come up with in the coming years.
Posted by T. at 8:49 AM

Ever since visting our rotating students at the American Hospital in Paris (it is affiliated with my home institution), where I had the best meal I had in Paris in their cafeteria, I've fanticized about being a doctor in France.

Then reality hits me.

Hi there. Love your blog. As someone who is Canadian but lived in California for a number of years, I'd like to comment about what I've noticed about healthcare debates both here in Canada and in the U.S..

Both sides of the debate have serious misconceptions about how well the other functions and where its inadequacies can be found. I can't stress enough how serious this misconceptions are and how often I've seen them used in arguments for and against each system.

(Please don't take this as an attack on your opinions/views -- it's my opinion that until someone has actually experienced both systems in a meaningful way and can combine this experience with really good, honest data, then I'm not convinced a sound judgment or understanding can be achieved.)

TBTAM - I am SO jealous of your meal at the American Hospital in Paris!! What did you have? (You can see where my priorities are...)

I don't think that there will ever be anything close to the perfect healthcare system.

Healthcare professionals have to be paid, medicines have to be researched, manufactured and distributed, hospitals have to be cleaned etc, etc. All this has to be paid for, whether at point of use, through an insurance, or through a universal healthcare system paid for through taxes. And for some reason, people object to their taxes going up as the population expands and more people are in need of healthcare!

Yet when people think of the ideal, they want something which is free at point of delivery (like the UK NHS system), and available on demand, without overcrowding and "other people" clogging up the system. Unfortunately, these are mutually exclusive - if people think something is free, then they will take advantage of it (hence the UK ambulance calls for paramedics to reach things down from high shelves. Really.), and the people who "don't want to make a fuss" are the ones who miss out.

Yet, on the other hand, when you have higher costs, which deter the "casual" user, you have situations like a friend of mine in Michigan does - she has big mental health issues, which should have led her to being hospitalised, but which her family could not afford. She needs professional help, and is being denied it on one hand because she hasn't been hospitalised, and is therefore not a severe enough case (by the Community Mental Health), the charity crisis groups say she is too mentally ill for their short term help, and the Health Commission won't even give her an assessment appointment until the end of Sept... She obviously doesn't have insurance because no company will touch her for her "pre-existing" condition.

Another US friend, who married a British man, now lives in the UK because her US insurance would only cover her for about three months' worth of the medication needed to keep her MS at bay. Her entire salary would have gone on paying for the meds for the rest of the year. In the UK, she gets it all at a standard prescription rate.

Here in NZ, there is a mixture of the two systems - you pay for doctor's appointments (more if you aren't registered with a GP as I found to my cost when I suffered a severe non-anaphylaxis allergic reaction a few weeks ago, although the $83NZD costs (~$58USD) did mean that the waiting room at the emergency clinic was completely empty when I went in - no queueing at all!), have heavily subsidised prescriptions ($3NZD - which some are complaining is still too expensive!), and all emergency healthcare (aside from ambulances in some areas of the country) is free at point of delivery. The Accident and Compensation Commission (ACC) will cover costs of rehabilitation / physiotherapy etc. if you have an accident, and personal suing is completely illegal (i.e. you can't sue the man who ran into you, though he may be taken to court by the police; you can't sue the surgeon who made a mistake, though the medical council may take action if the mistake could be attributed to malpractice).

Yet with both the NHS and the NZ system, there are issues with the healthcare system running out of money - people who desperately need operations (such as gastric band fittings) are being told that there isn't the funding for them, and that their cases have lower priorities than others. I would hate to be on the health board that has to make those sorts of decisions.

Is there an answer?