To Bare Or Not To Bare 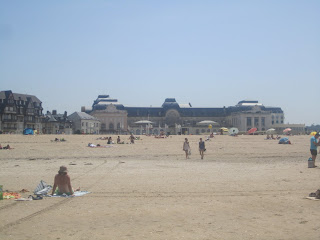 Topless sunbathing is widely accepted in France, where we've spent a lovely vacation visiting my husband's family. Our recent day trip to a beach on the northern coast sparked interesting conversations between my daughter and me and between my husband and me.
On one hand, I think the relative absence of Puritanical sexual repression in Europe, as compared to the United States, has provided some advantages. People are accustomed to seeing bare breasts on billboards and other media from a young age. Breasts therefore need not be objects of shock value or secret, horny fascination. Women are allowed to be comfortable with their own bodies - as they should be - and men allowed to be comfortable with women's bodies in multiple ways without having to be so obsessively titillated by the one aspect of them, their sexuality.
On the other hand, I value modesty. I think there's something to be said for being feminine and even sexy without needing to bare all, for keeping private parts private (and thus in some way sacred, and meant for reverent care) and preserving the meaning of intimacy. My husband pointed out, though, that two-piece bathing suits are already immodest; what's the big deal with doing away with the top piece? (He is, of course, half European.) My young daughter, on the cusp of womanhood, sounds torn between two cultures; she was a little shocked at how easily modesty was abandoned here in France, but also admired young women for their confidence in their bodies regardless of body type.
Not long after our trip to the beach I read the current National Geographic article about child brides in India and Yemen. So much in that article dredged up a lot of anger in me - at how girls and women are still seen around the world as possessions or goods for use, whose worth is directly associated with the integrity of their hymens, whose appearance or even presence is often blamed for what is really the uncontrolled lasciviousness and misogyny of the males around them. Are men all over the world really so incapable of controlling their basest tendencies? Really? Can't the rape just STOP already? What is WRONG with people?
In my mind the jury's still out on topless sunbathing. Where it's commonplace and culturally comfortable, there doesn't appear to be a down side, and there may even be many positives. Women's efforts at extreme modesty elsewhere don't seem to quell the animal frenzy that leads to their victimization by stupid, irresponsible, and worthless men. Perhaps if the whole world would just relax about the human body we could all just step back, appreciate it, and take good care of it.
Posted by T. at 5:17 AM

I would take the modesty argument much more seriously if men were supposed to safeguard something (anything) for their wife's eyes only.

I've always envied European women's comfort with their bodies. Then again, they all seem to look pretty damned good compared to us!

I'm with you on the modesty issue. Leave a little to the imagination is what I say....