Learning to Play; or, Two Steps Forward, One Step Back II

I think a capacity for silliness or playfulness is important. I find that people who don't seem to have one either are miserable or tend to make other people miserable, or at the very least extremely annoyed.
In med school I wrote a contemplative poem about my cadaver. That was not playful. But the little verse below, also penned during medical school, was meant to be, another self-check to make sure I wasn't taking everything so seriously all the time. In the wake of my recent ranting and raving, I include it as a way of stepping back and lightening up a little. 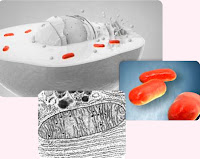 Ode to a Mitochondrion; or,
a medical student's homage to Ogden Nash
Cristae, cristae curling 'round,
In your matrix have we found
A clue to evolution's jaunt?
Are you an endosymbiont? 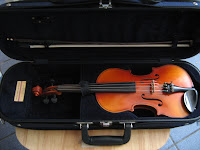 My son started taking violin lessons with my daughter's best friend's mom. Naturally when he brought home his little rental violin we all wanted to try it. No one sounded as screechy and awful as I did. It was pitiful. Best of all was our little boy, who produced a rich, mellow tone from it right from the start. I asked his teacher how this was possible - we had all been expecting to have to plug our ears during practice time to get through the squeaky beginning phase - and her explanation was eye-opening. Without a relaxed grip on the bow, it can't vibrate against the strings properly, and you get that awful scraping noise, whereas if one just eases up a little and "goes" with it - "goes with the bow," as it were - a nice tone comes out. The moral of the story is I am way too tense, and I need to learn to be more like my child who, despite a bit of an anxious nature, is still relaxed enough to be open to his experiences and just let the music flow through him. Maybe that's what's meant in part by "the kingdom of God belongs to such as these."
_________________________________________________________
That being said, I have to confess my annoyometer registered a pretty high reading this afternoon when I was dealing with someone from a local oboe reed manufacturer on the phone. This manufacturer charges $4.00 for delivery even though the same box sent through the mail by another manufacturer shows postage for MUCH less (like, by about 300%). Already this was irritating the first time I ordered from them. At that time I asked if I could pick the reeds up in person because I live so close by. They agreed, and it turned out the pick-up spot was two streets over from my house. Today I called and asked if I could do the same, and the woman made reluctant noises before saying finally, "We really don't like to do it that way."
"Why not?!" I asked, unable to imagine a powerful enough reason for her to object to such a sensible arrangement.
"Well, it's just coordinating everything..."
"But there's nothing to coordinate. The last time you let me know when they were ready, and I walked over, opened the front door, and picked them up from the foyer."
"Well...we like the orders to all to go out at once."
Eventually she agreed I could come on foot the two ridiculous little blocks, not worth $4.00, and pick up the reeds on Monday, but this whole exchange struck me as silly - not the kind of silliness I was advocating when I first started writing this post, but the ANNOYING kind, the kind of bad PR that makes you never want to call the company back or order from them ever again.
The problem is, their reeds are REALLY good, and I still haven't gotten to the point of learning how to make my own. Sigh...that's the trouble with getting attached to a brand. The only thing worse than your favorite pen or ice cream flavor or lip gloss getting discontinued is it remaining available but at the hands of people you don't really want to deal with!
First lesson of the fall is next week. Between my travels and my call schedule, not to mention my kids' activities, I may have to start from square one. This summer oboe hiatus has gotten pretty worrisome. I can feel my gains slipping away. I need to remember the lesson from my son's violin: I gotta just relax and go with the flow.
Posted by T. at 7:43 PM

Your son is also the right size for his violin, which really helps to make a nice sound. An adult, even one who plays the violin, playing a tiny violin is kind of like giant trying to dance in a garden without stepping on the flowers.

Soon it will be time for the two of you play the Bach double concert!

Loved the poem on mitochondria. I used to have the same problem with reeds when I played the clarinet back in the day. I'm sure trying to get the oboe reeds to "work" is much more challenging.