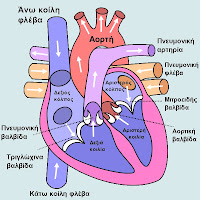 Not too long ago I had to counsel a family about a surgical procedure their loved one needed in order to have a chance at survival but which, at the same time, she might not survive. I told the family I needed to place a breathing tube for the surgery but that I was also unlikely to be able to remove it afterward. Our conversation was long and quiet but intense, and in the end I could offer no better news for them. "Thanks for explaining it to us, doc. You do what you gotta do." What I was able to do for that patient was very little. She survived the surgery and was in guarded condition when I left the hospital for the day, but she died later that night.
There's a lot that's hard in medicine. The hours. The demands. The stresses. These are merely exhausting or frustrating, but confronting our own impotence - that has something else to it. Something really humbling, a kind of sadness.
So why do it? Why did I? How did I end up in med school at all?
I was an English major in college, and a good one. I loved to read great books and write good papers. I was into music and dance, medieval and Renaissance history, ancient languages, modern languages, scripture exegesis, art history. I dabbled in theater and even performed the role of Connie in A Chorus Line. Later I would get interested in social psychology and anthropology. In short, I was a humanities student through and through, not an ounce of the science geek in me, nor the aptitude of one. I was fascinated and awed by science - especially molecular biology and astrophysics - but I had no facility with it. If I managed to get through a science class at all, it was with a lot of tears and sweat.

In my last year of college, while I was writing my English thesis, I took an EMT class for fun. Should I have or shouldn't I have? I ask, facetiously, because in the middle of that course a voice in my mind said, "Uh-oh. I think I want to be a doctor. I love taking care of people, and using clinical skills and science to do it." Here was science that had the breath of life in it! Physiology, the logic of the body, was a tantalizing intellectual pleasure. I wanted to learn all I could about it, and use it to be of service to people. The first (and, intially, the only) person I admitted this to at the time was the man I would eventually marry (at a time when we were "in neutral," between fitful bouts of dating). His reaction then is what it still is: whole-hearted, affirming, faithful support. We would wind up marrying and starting a family before I ever set foot in medical school, but set foot I did, for better or worse.

I wasn't always going to be an anesthesiologist, though. I was going to be a pediatric specialist and spent most of my electives in medical school preparing for a life in pediatrics. I took a special course in an inner city hospital in New York on the evaluation of victims of child abuse. I was attracted to the field of medical genetics because of its integration of child development, in which I had a master's degree, and counseling, and I had the chance to spend several stimulating weeks at the National Institutes of Health learning the ropes in its division of medical genetics. They wanted to hire me as a resident and fellow, in fact, but sometimes life takes its own circuitous path. Choosing anesthesia involved a "voice in my head" kind of moment too: after mask-ventilating a child for the first time, I knew I wanted to be the doc that was doing that every day. So here I am. 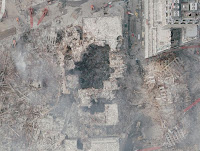 Sitting here on the eve of the anniversary of 9/11 I realize that though my life was left intact by those dramatic moments in our history, I was not entirely untouched by those events. When the planes hit the towers I was in New York, completing another elective in medical genetics at Mount Sinai Medical Center. The first nail in the coffin of my dream of becoming a medical geneticist was hearing one of the medical geneticists comment, "Should we go and help? Oh, wait, we can't really...unless they need IVs or something..." I was bothered by that. I wanted to be a doctor who COULD help in that situation, and even though I knew the ongoing care given by medical geneticists to their patients was irreplaceable to those patients, I also knew how abstract it could be, and I realized I wanted to be able to see the help I was giving. I'm a lot like Doubting Thomas in many ways.

Academic activity was suspended that day, but all fourth-year medical students were asked to assemble in one place and offer assistance if needed. Someone had the presence of mind to make a note of anyone who was multilingual. It was all for naught, as we now know: there were few if any survivors to help, and rescue workers needing medical attention would go to hospitals downtown, where some of my classmates were on rotation, not uptown.

That day was the most intense example of what for many physicians is one of the worst aspects of medicine: its limitations. When I look back on the times in medical school or residency that left me feeling utterly disconsolate, I remember moments when I or the clinician next to me would have to say some variation of "I'm sorry, but there's nothing I can do."
I recall a beautiful young girl who had been maimed somehow and who came to the orthopedist's office with the hope of restoring some function to her arm, the upper part of which had been shattered and faultily repaired in some foreign country. She couldn't lift her arm to the side, so when I asked her to extend it she had to unfold it in a broken-winged sort of move. The orthopedist was using my imperfect Spanish to communicate with this lovely girl and her mother, and I felt stupid, frustrated, and helpless telling them we couldn't do anything for them.

Another time in the ear/nose/throat clinic I examined an African American woman with downcast eyes whose eardrum was blown wide open.

"How did this happen?" the ENT fellow asked.
Her bottom lip started to quiver. "My boyfriend..."
We remained silent, hoping to give her space to tell the story.
"We got into a fight..." Large tears started to roll down her cheeks.
"He hit you," the fellow said quietly.
"Will I be able to go back to my job?"
"What sort of work do you do?"
"I'm a..." The woman was laboring to suppress a sob, but couldn't. "I'm a telemarketer."
"Oh," said the fellow. His manner was serious but gentle, like his voice. "The injury is quite severe. We could attempt a surgical repair, but I can't guarantee that surgery would help."
"But it don't feel right. Can't you do nothin'?"
"I'm sorry..." 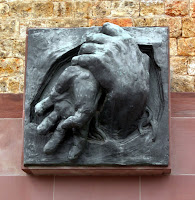 When something of ourselves rips or breaks, there is grief, a futile yearning for things to be as they were, unhurt, unchanged. Healing is an astonishing process, as is our capacity for it; but there is a melancholy aspect to it: we are forced to learn to live with scar tissue, with changed selves, and to accept that things can never be as they were before a blow was dealt, whether with words or ideas or fists or fortune. Perhaps in the end our scars are meant to teach us that while in some respects "there is nothing we can do" but let things be, and find new ways of accepting and transforming imperfection, it's also true that we can do more than we realize, especially when we recognize, get involved with, and learn from the wounded around us, and the wounded within.
Posted by T. at 12:04 AM

Very nice post! One that I wish I had written. Have a blessed day!

A very eloquent post. What an interesting path to med school! I enjoyed reading about it.

I don't think you made a mistake about your career choice. Naturally I can't look into your life, but we desperately need scientists and medical practitioners who also engage with the arts and humanities.

Just as we need humanists and artists with at least some notion of the sciences so thst they are at least taken seriously by those in the sciences—who take themselves seriously but make look down their noses at those not in such "rigorous" disciplines.