An Oboist's Christmas (or pre-Christmas) 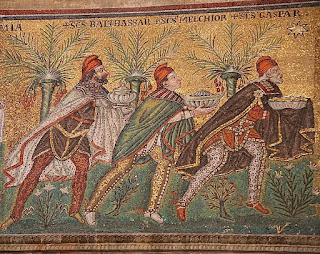 Lots of folks have a traditional holiday show they try to see each year. For some people, it's The Nutcracker. Others just gotta go to Radio City Music Hall for the "Christmas Spectacular," or to Rockefeller Center to see the Christmas tree lighting. Then there are those who have to catch a version of Dickens' A Christmas Carol, or The Christmas Revels, or perhaps curl up in front of the TV to sigh over It's a Wonderful Life or smile over How the Grinch Stole Christmas. I know I've been to a few Grinch parties in my day, and mentally hurled at someone at least once the very un-Christmasy thought from that story: "Your soul is an appalling dungheap, overflowing with the most disgraceful assortment of deplorable rubbish imaginable." :)
There are favorite holiday readings, too, of course - The Best Christmas Pageant Ever, The Fourth Wise Man by Summers, and my all-time favorite, The Christmas Miracle of Jonathan Toomey.
A few years ago my daughter and I started a holiday tradition of our own: we try to find a production of Giancarlo Menotti's lovely 1-hour opera, Amahl and the Night Visitors, each year. We've been three times in the last four years - not bad, considering how hard it can be to find a good production of this Christmas fairy tale / miracle story / family favorite.
This year we found what was unfortunately the weakest production we've seen so far. Frankly, they butchered one of the nicest little operas ever written, and one whose beautiful oboe parts specifically inspired me to want to learn to play the oboe. But the production had one saving grace: live professional musicians, including an amazing principal oboist who produced what has to be the BEST OBOE SOUND I have ever heard.
The oboist was Andrew Price, principal oboist of the Civic Symphony Orchestra of Boston and former pupil of the late Ralph Gomberg, playing on a rosewood Laubin oboe. At least, I assume it was rosewood, unless grenadilla comes in soft brown as well as black. I mean, WOW. Listening to the warm, rich tone Price got out of that instrument was like enjoying a delicious hot drink on a cold winter night - soothing, pleasurable, and perhaps even a little intoxicating. The Loree next to it sounded lovely, but the Laubin in Price's hands sounded absolutely, breathtakingly GORGEOUS. It was worth it to sit through the otherwise cringe-inducing production just to hear him play the oboe passages, as well as other parts of the orchestral score for which there weren't enough other instruments present. So for me, this year's Amahl wasn't a TOTAL disappointment... 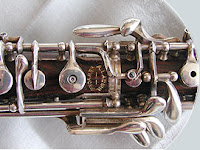 Laubin produces something like 20 instruments a year, by hand, out of their workshop in Peekskill. There's an 8 to 8 1/2 year wait for the rosewood instruments. My husband said good-naturedly that maybe if I order one now I'll actually be good enough to play it by the time it arrives... :)
LOL and *Sigh*

***
I'm working on a list of oboe-friendly Christmas music. So far I have 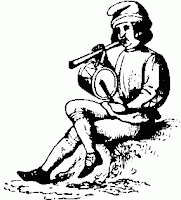 -"Ding Dong Merrily on High" from the Taverner Consort's Carol Album (sounds like more of a shawm than an oboe on this track, but I'm easy - a family resemblance will do!)
-the settings of "Fum, Fum, Fum" and "I Wonder as I Wander" on Kathleen Battle's CD A Christmas Celebration
-"Un flambeau, Jeanette, Isabelle," "Personent Hodie," "I Saw Three Ships," and the haunting "Wild Wood Carol" sung by The Cambridge Singers (the latter might actually be arranged with English horn...)
-"Jesus of Nazareth" and "Three Kings" from the Jesus of Nazareth film soundtrack
-and for playing as well as listening, I've actually found the Wexford Carol, the Huron Carol, O Come, O Come Emmanuel, Do You Hear What I Hear, and Wassail! Wassail! pretty user-friendly.
Stroope's "There is No Rose" should be on here too, of course - though I don't have a recording yet, nor am I even close to being able to play it. Other suggestions welcome!
Posted by T. at 3:12 PM

I'd sure love to play Amahl again some year. Nutcracker is really not my cuppa tea! But it's Nuts again this year for me.

You should learn a Christmas Carol with an oboe in the lyric!:

What a great suggestion!

Is that the English version of "Il Est Ne Le Divin Enfant?" It must be!

I'm familiar with the French version, thanks to my in-laws: