Who are your paragons? 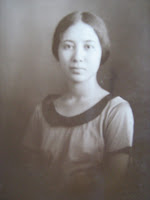 The MerriamWebster online dictionary defines a "paragon" as "a model of excellence or perfection" [Etymology: Middle French, from Old Italian paragone, literally, touchstone, from paragonare to test on a touchstone, from Greek parakonein to sharpen, from para- + akonē whetstone, from akē point; akin to Greek akmē point...Date: circa 1548].

A couple of days ago on his blog Running a Hospital, Paul Levy, president and CEO of Beth Israel Deaconess Medical Center, invited each reader to reflect on an individual who might come to mind as a "private moral guide" during moments of tension, difficult decision-making, or trying situations - the kind of person who, alive or dead, "serves as a standard against whom we judge our own behavior during a moral test."

Despite my struggles with faith I do often think of stories in the New Testament that give us a hint about Jesus' responses to the world around him. What I understand from most of these stories is that when he saw suffering he tried to heal it, and on more than one occasion when he saw human failure he would say, "Nor do I condemn you; go and sin no more." To me these responses on his part signify that we are not meant for pain but rather for peace, that we are not meant for shame and judgment but rather for acceptance and encouragement, and for the good work of striving to do our best, as people who have the capacity for reason, love, respect, and awe.

But a moral figure such as this, alive or dead, real or fictitious, can seem a little out-of-reach at times. Not so the person who inspired Paul Levy's reflection, the late Rose Finkelstein, a 101-year-old retired nurse who as a dedicated volunteer would often be found singing to the babies in the obstetrics department at BIDMC. A physician in conversation with Levy "said something about Rose along the lines of her being the kind of person who, when you do something in a patient setting that you feel really good about, you think that she would have been pleased."

When the going gets tough I do sometimes still think of my mother's mother (photo above), who died in 1985. I wonder how she might have handled things, or if she would be pleased at my handling of things. As I reflected on this question of moral guides I realized I do imagine a number of "spirit guides" looking over my shoulder for a variety of situations. Most of these "guides" are acquaintances from past chapters of my life who wouldn't even realize I still look to their example for guidance, and one of them is a fictional character! I thought I'd make it my list of the month: some of the exemplars against whose imaginary words of guidance I measure different aspects of myself.


For how to be a good spouse: my husband.

For writing: novelist and North Dakota poet laureate Larry Woiwode. His 1994 writing workshop at Cambridge University during a summer conference on C.S. Lewis was one of the highlights of my life; I only wish I could have lived up to the high ideals he set before us at the time.

For anesthesia: this is going to sound almost sacrilegious, but the other night when my husband and I were relaxing by watching a re-run of The Hunt for Red October, I realized that the character of Commander Bart Mancuso of the USS Dallas as played by Scott Glenn is the kind of leader I'd want to emulate - intelligent, knowledgeable, cool in a crisis, able to take charge even in unfamiliar territory, respectful of his crew's talents and concerned for their safety.

For medicine in general: Indira Dasgupta, M.D., a mentor from my days in pediatrics. Her knowledge, dignity, humor, and attentive care for her

patients accompany me to each bedside as I try to do the best work I can, as she always expected of me.

For teaching: Matthew Pravetz (a great med school professor), James Stewart (not the actor!), and Wilhelm Burmann (one of the best ballet coaches in the world).

These are just a few; I could sit here and think of a few more, but what I find interesting as I enjoy this exercise is the realization that the people who come to mind as my mental "guides" were people I consider to have been my best teachers...
Posted by T. at 9:27 PM

Hello. This is not a comment on your post but it is an attempt to make contact with you. I read some of your other posts and I conclude that you are a very sincere and caring person. I live with an extreme phobia of needles and I am approaching an inevitable hip replacement. My fear is a critical roadblock and I am seeking information or suggestions or inspiration or anything that I can work with to get through this. I am not seeking medical advice. I am however seeking understanding of my situation and the perspectives of someone who can connect all these dots and offer whatever they wish or feel comfortable about. If You do not want to respond for whatever reason, I understand and will not continue. If you do reply, I'll tell you about my "needle" experiences and how they have affected my life since the age of 6. I am now 61 years old. I came across your blog by way of the oboeinsights website which came up because of my family name which I have set up as a google watch - kind of odd yet somewhat curiously prophetic. Regardless, it was inspiring to read your recollections and whatever you decide, it was not a waste of time that I got this far. Thank you for reading to this point. Manfred.

p.s. - Red October is one of the few movies I own - it's an absolute favourite. Makes me want to go see Montana! Sean Connery is my favourite as well - there'll never be another 'Bond' in my mind.

Hello, Manfred. Thank you for taking the time to read some of the posts here. I appreciate that very much.

I also sympathize with you over the fears you described in your comment earlier. "Needle phobia" is exceedingly common! Some people even have extreme physical or physiologic reactions, often lumped under the term "vasovagal syncope" or "vagal responses," about which I think there may be a fair amount of info on the net. I wish I had sure-fire ways of overcoming whatever symptoms come over you surrounding needle sticks, but I'm not sure if any one method (for example, relaxation techniques, visualization, de-sensitization, et al.) works for every one or every situation.

The one suggestion that comes to mind is to try to talk either to your anesthesiologist or a member of the anesthesia department prior to your expected surgery. I think an open conversation can be so helpful for both you and your physician or nurse anesthetist. Just recently I had the opportunity to take care of someone for a hip replacement who seemed anxious about many things, but we invested a lot of time with each other just talking about the anesthetic plan, and I do think that was instrumental in the way things turned out, which was very well.

I can only make the most general of comments here, of course, as you have acknowledged, but I hope it helps somewhat to know that you are not alone, either in your experience of needle anxiety or, when the time comes, on the day your anesthetist cares for you prior to and during your surgery. I wish you all the best, and thanks again for visiting the blog!