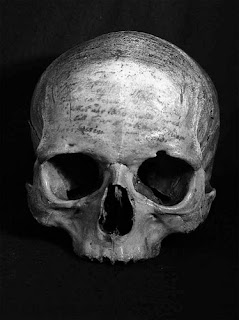 I heard an interesting conversation on NPR yesterday that's worth a listen: Tom Ashbrook of the radio show On Point interviewed author Russell Shorto about his latest book, Descartes' Bones. The book has received some criticism for giving Descartes too much credit for the role he played in philosophical movements in and around his time, but most readers seem to have found the work enjoyable and informative, and the questions it raises about faith and reason timely.
Upon his death from pneumonia at the age of 54 Descartes was buried in Stockholm but was later transferred home to France. At the exhumation, so the story goes, a captain of the Swedish guards removed his skull and replaced it with another. His original skull was sold several times before coming to its current resting place in the Palais de Chaillot, at the Musée de l'Homme, while his body lies in the church of Saint-Germain-des-Prés.
(This reminded me of the way the mummified head of St. Catherine reached its final resting place in the Basilica of San Domenico in Siena while the rest of her body stayed behind in Rome. I couldn't help but smile at the irony of rationalists keeping relics too.)
History and philosophy buffs will see in this tale of Descartes' bones the posthumous enactment of Cartesian dualism: the separation of mind and matter brought into symbolic relief by the very literal disembodiment of Descartes' head. His idea of mind and body as separate is probably among his most famous bequests to subsequent generations, along with his immortal (and, perhaps, often-misinterpreted or misappropriated) utterance Cogito ergo sum and his development of Cartesian coordinates and analytic geometry.
The question is, was he wrong? And if we are so sure he was, why are we still discussing the question today?
Neuroscience has increasingly shown, not mind over matter, or mind versus matter, but rather mind that IS matter. Memory, thought, experience, emotion, judgment and lack thereof, connection with "reality" or lack thereof, are all now thought to be the stuff of neurotransmitters being released (or not) in the brain, depending on the interplay of genetic and environmental influences on brain chemistry and development. Mind IS body, or so current science seems to tell us.
The pendulum has swung so far in this direction that commenters on the radio show's website have criticized Tom Ashbrook for even entertaining alternative points of view. In fact, there are Dawkins and Hitchens fundamentalists who seem to consider the very discussion of these matters a contemptible and even destructive waste of time and energy. And certainly in medicine, empiricism reigns supreme.
I'm not satisfied, though. I'm with Descartes, unlike the empiricists that followed him: I believed there are some truths that can be derived from outside the realm of mathematics and the observable. Granted, reason, logic and empirical thinking have their place, and a very important one at that, but they don't solve everything.
Descartes was interested in how we arrive at indubitable knowledge. Part of the answer lay in using simple, incontrovertible facts - not necessarily derived from frail, malleable sensory perceptions - as the basis and springboard for scientific inquiry and discovery. But even fairly reliable knowledge couldn't and can't give us answers to questions like, when does a human life count? When should it be saved? When should it be let go? When is a dead person dead? (More on this last question here and here.)
They all boil down to the same basic question Descartes and all those megaminds asked.
How do I know?
I think it would be arrogant for anyone to believe, and certainly dangerous to assume, that we have the answers for certain, or that we even can. But I also think we would be fools to stop trying for them.
_____________________________________________________
[Photo credit: "The skull of Descartes. Across the forehead, in Swedish, is an accusation of a theft in 1666 that began the skull’s peregrinations. Above it is a poem in Latin celebrating Descartes’ genius and mourning the scattering of his remains."]
Posted by T. at 11:59 AM

Slightly (well, totally) off-topic, but I heard On Point this week as well. He had the authors of both Gossip Girl and the Beacon Street Girls series on for a discussion of what our girls are reading these days, and how what they read influences them. It was fascinating!!

I can honestly say that what I read between the ages of, oh, 9 and 19 were HUGE influences on me. Lots of Madeleine L'Engle, which was a good thing, I think. (Considerably more wholesome than what I've seen some adolescents reading lately, to be honest...am I dating myself?)

I am deeply troubled by the philosophical position taken by Daniel Dennett on this subject. The notion that what we experience as "mind" and imagination are essentially rather limited MS Windows applications running on a wetware matrix doesn't ring true to my experience.

I'll always believe that humans are far more than the sum of their parts. Only the most tone-deaf philosopher can experience the great masterpieces of art and come away with no feeling of transcendence.

While empiricism certainly has its place (I'll take my science without the theology, thankyouverymuch) I have seen well-intentioned science/medicine do violence to the spirits of patients and families.

Kind of like Newtonian physics vs. relativistic & quantum. Good Old Newtonian still gets the job done just fine for most mechanical applications. But we realize that it has limitations, just as the scientific method does.

Agreed, anonymous - I guess that makes us "qualophiles" rather than "brights?"

I think Daniel Dennett's writings are very, very important. They are scary and bold challenges to traditional notions of the mind and soul.

I'm not a thinker or an ego on the scale of Dennett so I'm content to "quietly" disagree with him from my seat in the back row. And write blog comments about it! lol

He can call me and people with similar views whatever he wants. I don't care. I'm going to go home and enjoy my family and believe that my experience of them is of something larger than myself.

And if Daniel Dennett and other "brights" think I'm an intellectual loser, they can all bite me! lol

Love your blog! I heard the NPR story too, and your blog surfaced as I was searching to reference it in my own (professional, corporate) blog. However, my personal interest (parent of an high school senior daughter seeking a career in medicine leveraging her intelligence and interest in the classics) leads me to conclude I'll be reading (and discussing!) what you have to say some more! Keep up the good work!