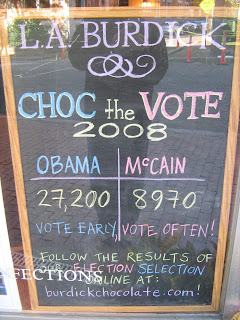 In short, we think Barack Obama should be the next President of the United States, and in light of what's outlined above, we don't see how anyone could be "undecided" at this point - unconscious racism, maybe?
Some might ask, but how can you, a practicing Catholic who on moral grounds would avoid choosing abortion for herself, support a candidate who is pro-choice?
The answer is, I think single-issue voting is irresponsible. The good of an entire society rests on many more things than any single issue could possible encompass. And criminilazing abortion WILL NOT solve the abortion issue.
Moreover, I believe being "pro-life" means being ANTI-senseless-war, ANTI-cutting-programs-that-help-the-disadvantaged, pro-healthcare, pro-education, anti-poverty, anti-torture. It means MODELING HEALTHY FAMILY RELATIONSHIPS, and prioritizing stewarship of the world we live in.
With Jim Wallis of Sojourners magazine, "I will choose candidates who have the most consistent ethic of life, addressing all the threats to human life and dignity that we face — not just one. Thirty-thousand children dying globally each day of preventable hunger and disease is a life issue. The genocide in Darfur is a life issue. Health care is a life issue. War is a life issue. The death penalty is a life issue. And on abortion, I will choose candidates who have the best chance to pursue the practical and proven policies which could dramatically reduce the number of abortions in America and therefore save precious unborn lives, rather than those who simply repeat the polarized legal debates and 'pro-choice' and 'pro-life' mantras from either side."
Does my faith inform my political leanings? My personal view is simple. JESUS WAS NOT A REPUBLICAN. (He was a community organizer, though.) He spent his ENTIRE public life providing FREE health care and other services to the POOREST of the poor REGARDLESS of whether or not they "deserved it" or whether or not the intellectuals and elites of his society supported it (which, often, they didn't). I think it's pretty clear what he thought we all should be doing.
Finally, a well-written point by a physician, Sid Schwab, who has put his brilliant medical blog on hold to rant about politics:
"This idea that any change in Bush's incredibly unbalanced and ineffective tax structure is, by definition, socialism, is like saying improving your kids' education is brainwashing. Returning to some of the tax policies of Bill Clinton??? Why that'd be like, like, going back to times of, what did they call it back then, what was that concept, fading from memory?
Oh yeah.
Prosperity.
I believe John McCain is smart, at least enough to know what bullsh-- this is. And there's no doubt he thinks so little of his 'base' that he assumes they'll eat it. Unsurprisingly, lots of them are. From every angle, his campaign assumes the worst in us, treats us like we're stupid. If it works again, as it has in the past, our descent is unstoppable."

The highest moment of McCain's campaign was when he defended Obama as a decent family man.  It was also one of his lowest moments, as he held up those admirable character traits against the "Arab" label used by the ignorant, racist, bigoted woman who called Obama one, reflecting the disturbing tendency of so many conservatives in this country to demonize Middle Easterners.

Obama will clearly have a full plate if he is elected as he inherits mess after mess in the realms of economics, religion & politics, foreign policy, national security, and race relations.  Our family hopes that this forward-looking family man is given a chance to use his outstanding gifts in the service of this country.
Posted by T. at 10:15 AM

I'm surprised that they haven't worked bile, venom, and bull---- into the ingredients of the McCain candy assortment.

Amen T!!! I'm so glad that you wrote this. We all need to speak out about this campaign.

Am not American, but loved this post. I agree completely.

(Actually all the chocolate sounds fabulous, but I would go with Obama on principle.)

As the election approaches, so does my sense of deja vu: elections slipping away at the last minute, from fear, disinformation, and disenfranchisement. Woe to us if it happens again.