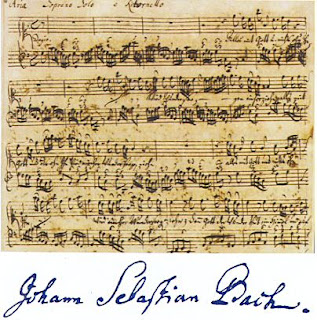 My oboe and I are officially back together!

I had a long summer hiatus, in part due to a bad bout of DeQuervain tenosynovitis. Since then my practicing has been sporadic, especially as my work life has grown increasingly hectic. But today, after much wringing of hands and disclaiming, I had my first lesson of the season...

So after all the scales and etudes, when we finally picked up the Air from Bach's third Orchestral Suite, I couldn't blow any more. Which was a bummer, because last night when I practiced this it went FINE. High notes actually sounded oboe-like. But I had only done a few scales then, rather than a whole bunch of scales, plus some etudes, plus some duets, etc. Today low notes were doing better than high. Don'tcha love it when you practice and feel good about how things are going and then get to your lesson and BOMB? *Sigh*...I gotta get back into shape.

I have my assignments now. The scales of the week will be E major, A flat major, and F minor. Yes, I have to bite the bullet, finally, and deal with more than three accidentals at a time! Etudes will concentrate on that transition from B to C sharp that I STILL can't seem to do smoothly. I'm also supposed to work on first and second parts for the Bach Air AND try something I downloaded from IMSLP to hear Kyoko play - she turned the tables on me! It's one of the variations from Act III of Swan Lake. It's often assigned to the Black Swan in Russian productions of the ballet but not as commonly performed in American productions.

This video shows Russian ballerina Lyudmila Semenyaka performing the (60-second) Swan Lake variation Kyoko and I were working on toward the end of the lesson:

...But it's the Bach I dream of. There's an almost sacred feeling to playing Bach. From the first note of the Air - when it doesn't come out sounding like a lung full of crackles in a patient with pneumonia - whether I'm listening or playing, I get transported to what feels like a higher, more blissful plane of consciousness. I bet my brain waves on EEG would show a shift from beta to alpha or something like that. It's as if all the beauty and holiness in the world have been distilled into these mathetmatically perfect musical passages, and as I breathe life into them they breathe life right back into me.
The pieces I can still play on the piano today are mostly ones by Bach and Mozart. Even my beeper now plays Bach to me, and I believe I find myself a little less resentful when it jangles me out of a deep sleep. That's partly why I chose it - because it transformed even a trite little beeper tone into something less noxious. Bach's been a part of my life since childhood. Among my earliest musical memories is the image of my parents playing Sleepers Awake for four hands on our family piano. I remember the warmth and contentment of those moments - and how somehow through my parents' playing together I felt quite loved.
Later my own relationship with piano was somewhat more troubled, mostly due to stage fright. As a kid I identified with the heroine of the book Play the Bach, Dear by Judith Groch, in which an 11-year-old girl who hates piano recitals has a teacher who helps her enter into the music and let go of some of her fear. I think Kyoko's just that kind of teacher. I don't know if I could keep taking oboe without her. We all need teachers like that - ones that release us from our hindrances and bring out the best in us. Maybe that's a teacher's most important job - helping learners rise above their own misgivings and really discover the life and breath of a work. And when that work is Bach...the lessons almost teach themselves.
Posted by T. at 4:31 PM

Your post has shamed me - I am very bad at practicing my oboe - I could offer up the usual excuses and say that it is because I am very busy, have so many other committments etc, but then I had last night free and spent it reading and looking at photos :-(

I only really seem to make sure I practice when I am playing a piece that I love (such as doing the Cor in movement II of the New World Symphony or Gabriel's Oboe), and can't really muster the enthusiasm for the Christmas pieces we are doing in orchestra. Maybe I need a teacher, too!

I know what you mean about the Bach - Sheep may Safely Graze is one of my favourite "relax" bits of music.

Jo, looking at photos is one of my favorite "relaxing activities."

I am soooooooo jealous you're getting to play orchestral Christmas music!

The first song I ever learned to play was "O Come O Come Emmanuel." That melody has the same transporting effect on me that Bach has.

You inspire me to practice...my piano and my voice. But scales? That's pushing it. Curse you, T. You and your scale-fingering, etude-playing self.

Well, after orchestra last night, the need for practice has moved a little bit higher in my priorities - Leroy Anderson's Sleigh Ride and Christmas Festival - some really evil bits in it! (including a C#/D# trill - wouldn't be a problem but I lost the tip of my left little finger when I was a baby, and when I last had my oboe serviced, the technician tightened up the L D# key too much so I can't press it hard enough to get the trill right...)

O Come is one of my favourite hymns - the minor key and range of it just sends shivers down my spine.

Heya!!! I just got back to practicing too this week after a nearly 7 month hiatus. Like you I was surprised to find out that what had declined the most was my endurance. Can we say OUCH?!!

Best wishes getting back into things. Sounds like you're on the right track.