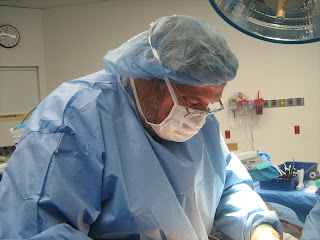 Bubba is one of my favorite surgeons. Though most other people at St. Boonie's are fictitious recreations, composites, or total fabrications, Bubba is real. "Larger than life," as he himself says. Yes, he gave me permission to post this. And yes, we do call him Bubba to his face.
Who else will look squarely at a necrotic gallbladder on a laparoscopy monitor and start doing the Darth-Vader-breathing noise behind his surgical mask, humming the Star Wars evil theme once in a while?
Who else will call the front desk after he has dictated his op note to make sure the secretary calls the village bakery to ask until what time the anesthesiologist can pick up the First Communion cake she ordered?
Who else will good-naturedly try to push all your buttons to see if he can get you to cuss intraop about the stuff that annoys you, or tell curdmudgeonly stories about his weekends, or abandon his solitaire game between cases to commiserate (snickering) with an anesthesiologist over an incident report written by another surgeon?
One day I offered Bubba a taste of some yummy spicy hummus I had bought. He declined politely. I toasted some slices of multigrain bread and spread the hummus on them for my lunch, and of course just as I was about to take a bite, my beeper went off. I set my bread and hummus down with a sigh.
"I'll be right back," I said to Bubba, who was sitting at the computer checking his e-mail while the nurses were setting up an O.R. for his next case.
I was the anesthesiologist in charge that day. I went to trouble-shoot something in the recovery room.
When I got back to the office area behind the main O.R. desk I looked down at my stack of bread slices topped with spicy hummus. My lunch, which I had so lovingly prepared for my own consumption. Half of it was gone.
"You're right," Bubba said, swallowing something. "That is good hummus." Then he shut down his computer and entered the O.R. for his next case.
We love Bubba. And he's a good surgeon, to boot.
Posted by T. at 11:26 PM

By coincidence, "Bubba" is the pet name we've come to use for our youngest daughter (10 months now).

She haven't tried hummus yet :)

I'd recommend starting with plain hummus when the time comes, then graduating to spicy... :)

They are a brand all their own, aren't they??