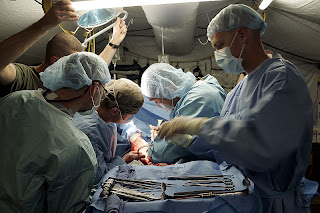 Recently I was paged stat to the emergency department for possible intubation of an infant. When I arrived there were three doctors, two nurses, two parents, a respiratory therapist, and a nursing supervisor crowded into a tiny exam room around a baby less than a year old. The baby's skin was dusky. The oxygen saturation reading on the monitor was alarming. The parents looked lost and frightened.
The x-ray showed a pneumothorax, or a collection of air in the chest causing an area of lung collapse, at the top of one of the baby's lungs. One of the clinicians was getting ready to insert a needle into the baby's chest to remove the collected air that was compressing the baby's lung.
"Second intercostal, mid-clavicular line," he said to himself as he poised the needle under the baby's collar bone. He inserted the needle and there was a rush of air. His assistant used a syringe and sucked out about quarter of a cup of air - a significant amount considering the size of an infant's chest.
Almost immediately the baby's oxygen saturation started to improve. In less than a minute she had come up to 95%, then 97%, then 99%.
"I think we'll hold off on intubating, for now," the doc in charge decided after seeing the results of a blood gas.
With that I was free to return to my other duties.
I like standing by to offer help if needed. I feel like a true team member offering a service that helps a healing process run more smoothly. That day, I have to admit, I was a little jealous that it was someone else's turn to be of such concrete help (in a good-natured way, of course). What a cool procedure, and what a great save! But I was proud, too. Proud to be working beside such a talented healer who had so much to teach those around him.
Posted by T. at 10:14 PM

I understand: That day, I have to admit, I was a little jealous that it was someone else's turn to be of such concrete help (in a good-natured way, of course).