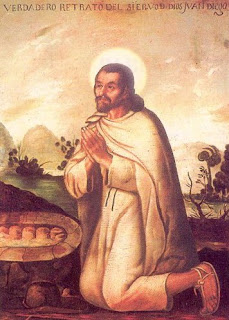 My name is Quauhtlatoatzin. "Talking Eagle," you would say. I am fifty-seven years old, a poor farmer and a weaver of mats.

You'll have trouble calling me by my name, I'm sure. I understand. Our names are not easy ones. You can use the name the white people gave me six years ago. They call me Juan Diego.

I was forty-five when they came, forty-seven when they won, fifty-one when they gave me that name. My wife, who was given the name Maria Lucía, died two years ago. I have only my skin-and-bone farm animals and a sick old uncle now for company. And my faith. I always had that. I have always believed we can find the sacred even in this sorry world. The Spaniards have fancy names for it - "grace" and "sacrament" and "liturgy" - but we're all talking about the same thing, aren't we? The presence of holiness among us?

I walk several miles to church every Saturday and Sunday. Let me tell you what happened on Saturday, the 9th of December, this year of Our Lord, 1531. Last Saturday. It was chilly that morning. I had my special tilma, the fancy hemp-and-linen one - the most extravagant thing I own. (I'm not even supposed to have one like this - only the rich folks are entitled to wear the finer things.) I was walking by Tepeyac and I heard birds singing on the hill. Strange, don't you think? Even stranger, I thought I heard a voice calling my name. Quauhtlatoatzin.

I ran up the hill and I saw a beautiful girl surrounded by a halo of what looked like sunlight, the pinkish-golden kind you only see at the very beginning or the very end of the day, my favorite times of day. She was no ordinary girl, that much was clear. She looked like an Aztec princess. And so young - fourteen, fifteen, sixteen at most. Yet she called me Xocoyte - mi hijito, my little son. Would you believe my cheekiness? I teased her and called her Xocoyote, my youngest child. She took it well.

Her Nahuatl was perfect, mind you. You have no idea what it is to have to adopt a language not your own, learn things you don't necessarily want to learn, then hear your mother tongue spoken so beautifully. You feel as if you're home again; it's familiar, it's what you grew up with, you're safe, you're known. I could have wept. I only get to speak it with those closest to me, and the one who was closest of all is gone.

Anyway, she wanted a shrine. "Just for you, my youngest child?" I teased again. She was so small, yet somehow I also knew she was greater than all of us put together, even the white people. Yes, she said, a shrine, a teocalli where people could turn to her, Coatlaxopeuh, "she who crushes the serpent;" a sacred place where people could pour out their hearts and find her love, her compassion, her help, and her protection. "Here I will hear their weeping and their sorrow. Here they will find help for their suffering."

I don't know when exactly it dawned on me that I was speaking to the most special woman in the history of the world, but I think by the time she said these words, I knew.

She told me to tell Juan de Zumárraga. Me? Go to the Franciscan in charge? "You think Fray Juan de Zumárraga will listen to a poor peasant, my Lady?" I begged her - I mean, got on my knees and begged her - to send someone else. But she wouldn't budge. Who knew that the Blessed Virgin could be so stubborn, I muttered, teasing her again. You won't find that in any book. 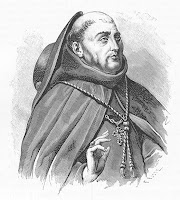 Well, I went to see Zumárraga all right. What do you suppose he said? Actually, it went better than I thought. He wasn't as arrogant and mean as I expected. He actually listened and didn't have me dismissed as a madman, but he was a little condescending, and clearly he was doubtful and thought he had better uses for his time. He said he needed a sign. I thought that was fair.

So on my way to church on Sunday I went up Tepeyac hill and saw my Lady again. I begged her again to choose another messenger - someone important, someone whose words would count for more than mine. You should have seen the way she smiled at me then. You know when your mother or your wife smiles at you as if you're the most wonderful, the most important, the most beautiful, special person she has ever seen? That's the way she smiled at me. She said I would have my sign the following day. "Not my sign, Xocoyote," I replied. "Zumárraga's."

When I saw Zumárraga after Mass he repeated that he still wanted this "sign." Proof, proof, I needed proof, proof of what I was saying, proof that I spoke the truth. Or rather, he needed it.

But that night I was preoccupied with other things. I went to my poor sick uncle's house, and he was in such a bad way. The next day I set off for the city to find a priest to give him the last rites. I was avoiding Tepeyac but she found me anyway. I felt a little sheepish but I told her where I was going, and she said, "Don't worry about that. Your uncle is well."

She had me there. I asked her what I should do. She told me to go up high on Tepeyac to pick flowers.

"Flowers! But nothing blooms up there, Xocoyote, especially at this time of year."

Nevertheless, I went up Tepeyac on December 12, and there I found an abundance of Spanish roses. Beautiful, fragrant Castilian roses. She helped me put them in my tilma and told me to bring them to Zumárraga. "The real miracle," I said, muttering pointedly, "will be if such important people listen to the voice of someone so unimportant." She must have gotten used to my muttering by then. "Your name suits you, Talking Eagle," she said. She gave me strict instructions not to open my tilma for anyone but Zumárraga. She must have known people I'd pass on the road would keep asking me, "Hey, Quauhtlatoatzin, what's in the tilma?"

The hardest part was when Zumárraga's people were insisting on seeing what was inside before I was allowed into his chambers. She must have been protecting me, because in the end, I was able to see him without opening the cloak. His whole household was curious by then, and already gathered at the door, so they followed me in. There was a translator there, of course, and also a dark-skinned slave woman, the cook and her three children, and a couple of other men.

"The Lady asked me to bring you this," I said to Zumárraga. I opened my tilma and out spilled the roses. "I picked them on the barren part of Tepeyac this morning."

But he was barely paying attention to the roses. Castilian roses, man! I felt like saying to him. You can only get these back where you come from! Nothing grows up there! She had to explain to me what they are! His mouth was slightly agape and he was slowly kneeling, but he wasn't looking at the flowers. He was looking at my tilma. So I looked at it too, and do you know, I almost dropped the thing. Because there she was, my Xocoyote, just as I'd seen her on the hill. 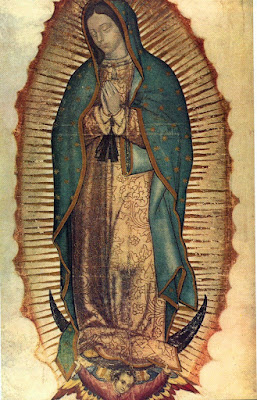 Her words echoed in my mind at that moment: "Hear me and understand well, Xocoyte, that nothing should frighten or grieve you. Let not your heart be disturbed. Do not fear..."

That's been her message ever since.

I just love your version of the Guadalupe story: Juan Diego in first person singular!

I'm so excited to tell your version tomorrow in church that I can hardly sit still. Brava y gracias!