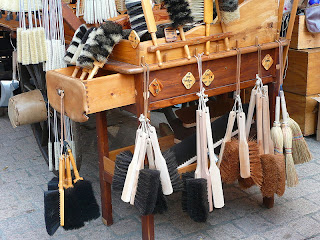 Every work place has at least one person whose mode of discourse is permanently fixed at "complain or criticize as vociferously as possible." Often such individuals strike others as abrasive, unpleasant, irksome, or downright exhausting. Everything that comes out of their mouths is waah, waah, waah. They seem incapable of speaking in any other way.
I walked into the lounge when one such person was holding the fridge door open and accusing the housekeeping staff (in their absence) of consuming some leftover sandwiches that a couple of the surgeons had ordered for those who help out in the O.R.
Now, the fact that the sandwiches were no longer in the fridge could have been due to a number of things - hungry anesthesiologists or surgical house officers on call, disposal by someone concerned about old food in the fridge, nurses on break between weekend cases, etc. But this woman had it in her head that the housekeeping staff had taken the sandwiches, and the two others in the lounge who were discussing the issue with her were more than happy to accept her conclusion as gospel.
For at least five minutes they went on and on and on about how the O.R. wasn't truly a locked unit, anybody could get in, the housekeeping staff had surely gone in and helped themselves, blah, blah-blah, blah-blah. Back and forth, back and forth, complaints and criticisms, complaints and criticisms.
Then there was a brief lull. One of them took another bite of her salad. Another looked in the cupboards for sugar for her coffee. The third looked out the window.
I probably shouldn't have intruded into the conversation, but it was a small lounge, and their words were swirling around me like angry little gnats, and there was something I wasn't quite understanding. So when this pause in the diatribe came, I took a sip of my coffee and asked, "But why shouldn't they be included?"
All three heads turned toward me. What was that look on their faces - incredulity? Lack of comprehension? Annoyance that I had opened my mouth?
Finally one of them retorted, "The housekeeping staff?"
"Yeah," I said, taking another sip of my coffee.
"The whole housekeeping staff for the whole hospital?"
"You're saying the whole staff came here over the weekend?"
"Yeah. They have their meetings in this room."
"Okay, but why shouldn't they be included?" I repeated. "They do all the work in this hospital that no one else wants to do."
Just a few days ago when I arrived at the hospital I came across a man in uniform on his hands and knees scrubbing the floor around the toilet in one of the small lobby bathrooms. Clearly someone had had some kind of unpleasant accident or something. Who was going to thank him when he was done having his hands and face in someone else's excrement so someone else wouldn't have to be confronted with it?
The three women in the lounge stared at me for a second, then returned to their lunches in silence. When I left the room with my coffee they were still sitting there not saying a word. I would really have liked to know their answer to my question.
Posted by T. at 9:42 PM

Sounds like most of the fellows in my program!

Oh, and I think you're right. The housekeeping staff have as much right to the sandwiches as anyone else.

(sigh) It's so good to see you back. I sure have missed your writing...especially like this entry. I would have liked to hear their answer too. :)

Great post. And great for you to note that everybody is on the same team and should be treated with respect. No pedestals when I'm working, either. Good for you!

I have worked in some places where I would not be surprised to hear that conversation (in one of those hospitals, I baked mince pies for the admin staff and I was shocked by how surprised they were that a doctor had included them). Fortunately, in my current hospital all delivery suite staff are welcome to whatever they can find in the fridge w/o someone's name on it! In fact, w/o the domestic staff - who remind us to have lunch and make coffee and toast - the kitchen would not be as nice a place to take a break.

I'm glad that you stood up for the housekeeping staff. No matter where I've been, they seem to be overworked and underappreciated. You are a very kind person :)

at the firm i used to work for in Austin, whenever we (the far flung account execs from around the country) were done with our (very important. very) business meeting/lunches, the extra sandwiches and whatnot were placed in the kitchen and an email was sent out to all hands: "it's feeding time."

never ceased to amaze me how many mid-level execs (not the regular staff) raced to the kitchen to get their plates piled high with free goodies. to the credit of the sr. staff, i never witnessed them partaking of the extra sandwiches, etc.

your post, oboe doc, is an excellent reminder about servant leadership. when my kids argue about riding in the front of the car, or getting/demanding something, i sound like a broken record but i remind them that "the first shall be last, and the last first." they can't stand when i say that, but they "get it" immediately.