Perelandra.
That name has been stuck in my mind ever since my husband brought her home from the oboe doctor's shop, and I can't seem to shake it, so that's her name.
C.S. Lewis fans will recognize her name as the title of the second novel in his "Space Trilogy," an imagining of the story of the Garden of Eden as it might play out with an Eve figure who has some protection against the corrupting influence of the garden's resident monster.
Perhaps loosely I think of my new oboe as a key to a new world, to a place of beauty and wonder, of mystery, purity, and new beginnings...a sacred key at that, worthy of reverence and protection...but really I just like the way the name sounds, and the way it feels when I say it. It suits her.
***
Yesterday's oboe lesson was the last before my Christmas vacation. Kyoko seemed as excited to take Perelandra for a spin as I was. I had practiced only out of my little method book prior to this lesson, but of course, as luck would have it, we ended up doing mostly fun music for this last session before break.
We played as a duet what I now think of as "the oboe carol" - better known as Il Est Ne Le Divin Enfant. I had given Kyoko Z. Randall Stroope's score for "There is No Rose" for Christmas, and we ended up working on that, too, even though I kept telling her it was way too hard for me. As it happened, it felt much easier to play yesterday than it had when I first attempted it. Must be all those the method book exercises! That oughta teach me something!
"Why don't you try left F for the opening line?" Kyoko suggested. I did. It sounded better.
"I'm curious - how do you get to a choice like that?" I asked.
"It's a musical choice rather than a mechanical one," she explained. The left F key produced a fuller sound than the forked F, and the F in the opening passage of "There is no rose" is at the top of a melodic arc, one for which you'd want that nicer, rounder sound. This fascinated me. I was beginning to understand decisions based on what was right for the expressive dimension of the music rather than just on what was convenient fingering. It such a thrill to be able to start to understand different layers of something! 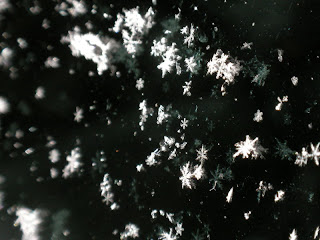 It's been snowing all day, a pretty snow that made me listen repeatedly to Tchaikovsky's snow scene from Nutcracker while I was driving from hospital to hospital. People might find it trite, and apparently Tchaikovsky himself was less than enamored of his score for The Nutcracker, but that snow scene has to be one of my favorite pieces of classical music - an almost guilty pleasure. I find it so evocative. I kept wondering today how it is that his particular choices for the orchestration so readily bring to mind images of snowflakes swirling around over tree branches, under street lamps, across fields and villages. As I drove through my own winter wonderlands today the music seemed to carry the snow aloft, expressing its movements through the sounds made by the flutes, oboes, and violins.
I had to smile over a memory of one Nutcracker performance in which I danced the part of a snowflake - a stray snowflake, in fact, who arrives on stage late, with the long run played by the flute in the opening passages. Did the choreographer have a sixth sense about me...?!

We're off to the Philippines for three weeks tomorrow. I am on call tonight. Stayed up till 2 in the morning packing last night. I'm tired.

I hope to keep writing while I'm over there visiting my parents. Everybody please send some positive energy our way as we board the looooooooooong flight across the world!

Have a safe trip, T. Merry Christmas to you and yours!

I think that's a beautiful name, and your explanation of it is really wonderful.

Have a safe trip and a Merry Christmas.

Why? Because I struggled with left F for eons, since I didn't have one for a long time!

Have a lovely Christmas, T!

(I have three Nutcrackers to go. Best thing about them is watching the very exciting children hopping up and down as they make their way to the hall ... I just love to see them, and it always reminds to me of why I'm there!)

I recently came accross your blog and have been reading along. I thought I would leave my first comment. I don't know what to say except that I have enjoyed reading. Nice blog. I will keep visiting this blog very often.