Quiapo and the Black Nazarene

"You want to go to Quiapo tomorrow?" my mother asked yesterday after lunch. I could hear the good-natured, "Are you out of your mind?!" contained in her question. She continued, "But Friday is Quiapo day."

"It'll be packed with people."

By evening I was starting to get a little concerned that an expedition to the seedy Manila neighborhood during its busiest time of week would be sheer madness. The fact that it took us 2 hours and 45 minutes to drive home in bumper-to-bumper traffic from my aunt's farm yesterday, only 30 miles out of the city, also got me discouraged. But when I got up this morning I was still game to go, so off to Quiapo I went, with the woman who had watched over me during my childhood (my former yaya) and her sister, Nita. 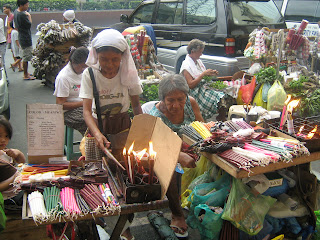 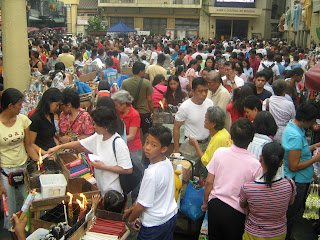 Quiapo is a city district that not only lies geographically at the heart of Manila but also might be considered the spiritual beating heart of the city. On Fridays in particular, “Quiapo day,” it teems with crowds of devotees who flock to Quiapo church, some on their knees, to attend masses that go on all morning. Outside the church are hordes of vendors plying colorful candles, flower garlands, and religious prayer books as well as an odd assortment of goods such as rat poison, dog leashes, bundles of wheat to ward off bad spirits, and palm leaf fans to combat the heat. 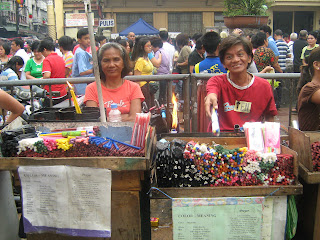 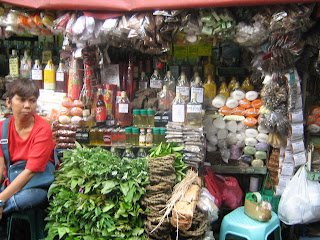 Perhaps most fascinating are the vendors that set up their wares in the streets surrouding the church and its plaza. 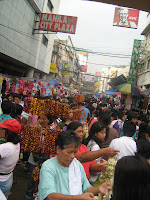 We maneuvered around clusters of people to get to these vendors, our nostrils frequently assailed by the pungent stench of rotting garbage in the streets, the sweet scent of sampaguita garlands, the aroma of various foods being roasted or baked nearby, an occasional irritating whiff of cigarette smoke, and the rancid bouquet of human perspiration that was never far away. Some stands displayed a variety of oils and herbs that were supposed to have efficacy against different ailments. Others sold magic objects, or “anting-anting”: 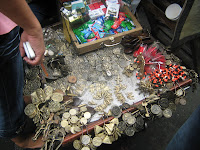 amulets believed to have special powers, either to bring good fortune or to garner heavenly protection.
For fun I bought a talisman in the shape of a key, and the seller explained in rapid, barely intelligible Tagalog its use and the instructions I had to follow while it was in my possession. She whispered to it before placing it in a little bag for me and packaged it with a handwritten prayer that I was to open and say at midnight at the New Year, for prosperity. Or at least, I think that’s what her instructions were. 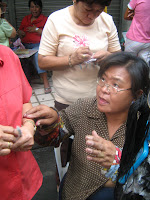 Even Nita could barely understand her.

There is a long history of folk belief, “alternative medicine,” and superstitious ritual here, most of it entirely oral, with no source material for folklorists or historians who might have an interest in the cultural anthropology of the Philippines. The juxtaposition of established religion and folk tradition is apparent in the transactions with the amulet sellers and fortune-tellers in the square. Right across from the church door, in fact, sits a row of soothsayers who, though ordinarily forbidden by Catholicism, are tolerated here, at a crossroads where religion and magic travel hand-in-hand.

Just inside the entrance to Quiapo church sit a number of older women, the mandarasal, who offer to say prayers for people in exchange for a monetary donation. While this might seem utterly distasteful to many, it seems that some of these women regard their service as just that: a service to those who feel they don't know how to pray for themselves or feel they lack the fervor they would like to have as they say their prayers. Ted Lerner in a 2003 article for Asia Times quoted church administrator Gigi Camballa,

"We never get complaints from parishioners. The complaints come from religious people who think they know better. Sometimes nuns complain about the practice. But I tell them, 'Don't we all receive donations? They have to eat, they have to feed their families. It's their livelihood." But Camballa understands the feeling of outsiders. When she and her colleagues first took over running the church in 1999, they tried to drive the prayer ladies out of the sanctuary and into the busy square outside. "Our first impression was that this was 'pay for pray'," she said. "But they said, 'It's not payment. It's a donation for our food.' So we were forced to observe them. We discovered that they are helping people. There's value in that. People see the donation part and they think negatively. But they haven't taken the time to understand." 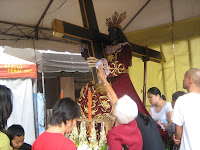 The central object of devotion at Quiapo church is a 400-year-old statue of Jesus carrying his cross. This is Nuestro Padre Jesus Nazareno, the Black Nazarene. Carved by an Aztec woodworker in Mexico, it was procured by a priest and brought over to Manila on a Spanish galleon with the Augustinian Recollects in 1606. The ship went up in flames around it on arrival, but people kept the charred statue and put it in the Recollects’ church. 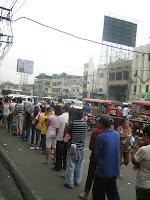 It was moved to Quiapo in 1787. Quiapo church, the foundation of which was laid in 1582, went up in flames too, once in 1791 and again in 1929, but the Black Nazarene survived. The icon also survived two severe earthquakes, in 1645 and 1863, as well as the bombing of Manila in 1945. These survival stories increase the relic’s mystique and appeal among devotees, who today stood in a line which snaked around the block just to touch the statue.

Touching this image of Christ is believed to confer possible healing of diseases and sufferings, and perhaps other miracles. Belief in the power of this physical contact, this laying on of the faithful’s hands, is so strong that some believers rub the statue with cloths in the hope of carrying some of its power home. During the great fiesta of the Black Nazarene, on January 9, the statue is carried through the streets in procession and hundreds of thousands of people try to get close enough to toss their handkerchiefs or towels to the image-bearers (see video below - though I'd like to remind people that not all Catholics have the same understanding or express their faith in the same way; for many, devotional traditions such as these are quite alien). Many who walk in procession with the Nazarene do so barefoot, braving the hot asphalt, as an expression of humility.

"Does it really do anything for them?" I mumbled, half to myself, as I wandered with my two companions among the faithful queued up to see the Nazarene.
"When there's enough belief, then it becomes true," answered Nita, "and the power is experienced." We were quiet after she said this, taking in the sights and sounds of Quiapo.
Touch, faith, and healing. Magic and mystery. History and myth. Street noise and soulful silence. These are the colorful offerings of Quiapo, with its seething dance of human activity, its incomprehensible jumble of despair and hope. 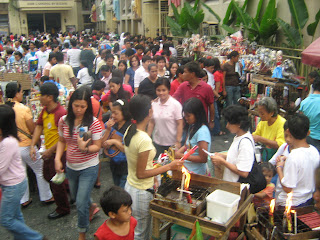 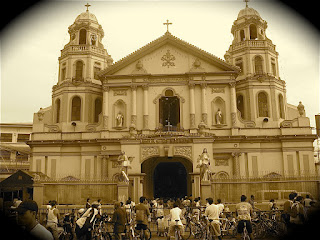 For some terrific pictures of Quiapo, see here (laz'andre's pics on flickr) and here (pinoytravelblog).
Posted by T. at 3:04 AM

Thanks for sharing your trip! Glad you are enjoying yourself.