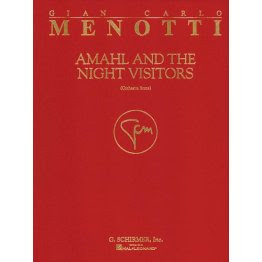 Ah, Kyoko. I don't know how she does it, but she's always able to strike an amazing balance between letting me dream and luxuriate in tantalizing oboe pieces I'm yearning to play...and reeling me back down to earth for some serious, and in my case very necessary, work. She's so gentle and respectful about the latter, too, that it doesn't even dawn on me till halfway through an exercise that I've been re-grounded, the stardust brushed kindly but decisively off my shoulders and my shirt sleeves re-rolled to the elbows.
For Christmas my husband ordered me a copy of the orchestral score for Amahl and the Night Visitors. I have been so excited to try out some of the oboe passages that I've sorely neglected other oboe duties, justifying the behavior with the thought that after all, a lot of the Amahl passages are useful as etudes for this or that oboe skill. Don't we all know that trick!
So of course today I brought it to my lesson(because she wanted to see it too when I mentioned it last week), and when she asked me to try the opening passage, I totally BOMBED. Serves me right, right? People who can't walk well yet shouldn't try to fly, and all that...After realizing my reed needed repositioning (I tend to hold it too far out of my mouth, probably because I'm afraid of sticking it too far in), it came out much better, but by then the humble pie was already sliding down my gullet.
Then we tried the oboe duet at the beginning of the Shepherd's Dance, a piece near and dear to me heart because a friend and I danced the part decades ago in a production of Amahl (we even sang along with the chorus during the shepherds' entrance!). Kyoko wanted me to play 1st oboe, but I had only attempted 2nd oboe and was more intimidated by the 1st oboe part (which just seems harder). After many false starts during which I seemed to have forgotten the existence of accidentals - "Um, that's a G# there" / "Oops, sorry" / "And you want a C# there" / "Oh. Right..." - we got through the first several measures, and it was actually halfway decent. (Mostly Kyoko's half...)
We then played the voice parts for "Don't cry, Mother dear" and did do some real work on techique. But then we put the candy away and took out the vegetables. She checked my scales and arpeggios. I could play the ones she asked for, but with some hesitations. Luckily I had been doing more of the arpeggios...but unfortunately neglecting B flat & E flat, which became immediately obvious when we got to them. It was clear that I could have been more fluent if I had spent as much time on these basics, like a good music student, as I do on the pieces for chamber ensemble or the pieces I dream of playing. I felt so undisciplined, like someone who's been sneaking cookies out of the cookie jar but leaving the brussel sprouts at the side of the plate at every meal.
Kyoko admitted that she's had her share of sitting in front of piano etudes to practice, only to let the second hand on the clock drift considerable before actually laying a finger on the keyboard (of course I think she was, like, FIVE at the time...). I guess training exercises are never the favorite thing, whether it's tendus at the ballet bar, hockey drills, crunches, or repetitive finger exercises. She gave me several tonight to help me out with my difficulties transitioning from B or C to anything higher, and back. Exercises like these, etudes, arpeggios, and scales do bring some satisfaction when you feel your act cleaning up, your fingers gradually more dexterous, like they've jettisoned a lot of unproductive motion and are working more cleanly. And when all's said and done, they're really not so bad. She instructed me to spend time on these every practice session. I resolved to work harder on these things, which any real musician would and should be doing.
I expected oboe to be a struggle, almost impossible to learn. The reality is that although it's definitely challenging, it's also accessible, with enough work. I thought any teacher I could find who was even willing to take someone like me on - an adult beginner who's never, ever going to perform - would just go through the motions, but Kyoko has never done that. She treats me like someone who's serious about making good music, and really teaches to that very important end. I feel like she cares about my learning, regardless of my "status" as a total amateur. I guess I try to do the same in medicine, teaching people about airways and lung sounds with the same detail - and expectation of work - no matter what their background or future plans may be. Seems like teachers who don't "dumb down" probably get students who tend to work on things and constantly strive for better. Funny how that works.
Posted by T. at 10:36 PM

It's always good to have a good teacher, and best of luck in your musical endeavors.

I imagine that your lessons are the highlight of Kyoko's week. There is nothing more rewarding as working with an intelligent adult beginner who is learning to play for all the right reasons. And when you, as you put it, "bomb," it is an invitation for Kyoko to teach you something. You are both very fortunate to have this relationship.

And Amahl, lovely as it is, is difficult music, ESPECIALLY that oboe duet.

You write so beautifully and your description of Kyoko's teaching style makes me smile - I could put myself in your shoes as you described your lesson.

I think studying the oboe must be the same for everyone - starts and stops, peaks and valleys, straightaways and roadblocks. I've also been feeling frustrated with my playing lately. At my last lesson, Kyoko set my "fun" music aside as well and listened and watched me play scales and arpeggios. She uncovered so much garbage it was embarrassing. I told her I thought I might be approaching a new plateau of skill and this was the work required to get there. She smiled and said "___, you are so positive."

Well, that was last week. This week I'm feeling the old "why am I doing this, I'll never get anywhere" syndrome. The rationale is "Oh well, it's winter and I'm just slowing down a bit." I woke up this morning thinking "What's the point?"

Then I read your email and realized "Hey, I'm not alone on this". You, me and all those other student oboe sufferers out there. We're all feeling the bliss and the pain - even Kyoko has got to have her bad days. So I plan to jump on the horse and practice today - scales AND the fun stuff. How 'bout you?!?!

One more thought. I think we adults might be a little hard on ourselves because of our ability to visualize a playing level we probably will never achieve. I don't remember playing the French horn as a kid and having all this angst. I just practiced and played and don't remember being judgemental. Getting older is definitely a mixed blessing.

Rema and Elaine, thank you!

Fellowkyokostudent - so glad I'm not alone either! I'll be back in the practice room with those exercises too. Looking forward to when we can play some of that "fun" music together, though!

Elaine's right - we're so lucky to have Kyoko. See you soon!