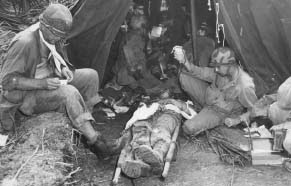 (Photo credit: Plasma being given to a wounded GI in the Philippines, from the exhibit Battlefield Medicine 101: From the Civil War to Vietnam Photo Gallery, found on the National Museum of Health and Medicine website)


Battlefield, ballet theater, hospital, and church. What could these four possibly have in common?

I started reflecting on this after I visited the current edition of SurgeXperiences, a blog carnival hosted this week by Chris over at Made a Difference for That One: a Surgeon's Letters Home from Iraq (I hosted the last edition a couple of weeks ago). He centers his collection adroitly around "the love-hate relationship between surgery and war," and offers this introductory thought:

"What I realized most as I reviewed the excellent submissions this week, is that surgery, both for the patient and the surgeon, is very much like war. There is an urgency to fight against a foe who may kill if left unchecked. Both are activities with high contact and there will be blood. Both are better, far better, when over."

I don't know a whole lot about the military, but I'm pretty familiar with the ballet world, medicine, and my dear old ecclesia. Here's what struck me as comparable features among all four of these seemingly disparate arenas:

1. Training: those 10 or 15 years you spend preparing to participate fully. It's often hard and painful and can feel incredibly unfair. But what doesn't kill you makes you stronger, right...? (I dunno - I actually have a bone to pick with that idea, because I've seen it make people morally weaker or emotionally scarred, too, in some cases...)

2. Hierarchy. Many Americans or folks with egalitarian sensibilities might chafe at operations conducted, and in fact reliant upon, a fairly rigid hierarchy. But though I strongly believe all people have equal dignity and equal rights, their unequal abilities / education / training / experience make hierarchies useful when used properly, without abuses of power or disregard for people's intrinsic worth.

3. Inside jokes, jargon, language, customs, rituals, and familiar experiences. I'm a "native speaker" in three out of the four cultures, but I can see how foreign each of them must look to those who are just "passing through," and how possessive the "natives" can be of their special knowledge of the world they inhabit.

4. Near-total outpouring / investment of onself required - and, on a related note, "the show must go on." It can't stop because you're tired or uncomfortable or emotionally stressed. You're needed for a purpose higher than satisfying your own needs. I'll admit I've often resented this. I once heard the O.R. nurses complain bitterly (and with good reason, I thought) about a time when they were called to work on the obstetric floor because the obstetric nurses were "de-briefing" all day over a traumatic loss that they hadn't even directly been involved with. For most combat medics, docs and anesthetists, surgeons, residents, performers, etc. there's no "de-briefing" allowance. If you're needed, you go to work, even if you've just seen or experienced something traumatic and wanna curl up under a blanket and cry for a while. Sorry. You're needed elsewhere and you gotta put aside your needs and your feelings (what business do you have having THOSE anyway? That's "weak!").

Just the other night I had to re-intubate someone for respiratory insufficiency in the PACU under stressful circumstances, with the next surgeon chomping at the bit wondering when we could start his case, and when I finally got the patient all settled in the ICU the phone rang with the surgeon (actually, a cardiologist who, unlike most surgeons who take about half an hour to place a pacemaker, often takes two to three hours) wondering when the heck we could get started. It was 7:30 p.m. All I wanted to do was go home and cry out some of the tension and fatigue, but instead I had to go back to the main O.R., smile, and greet the next patient as if nothing had happened (Bongi at Other Things Amanzi writes about a similar phenomenon of having to be all bright-eyed and bushy-tailed for the next person after you've told the last person the worst news she's ever heard). This is one of the things I find challenging about my job (besides the fact that you never know what's coming and that possible disaster's always looming around the corner): the fact that you have to commit to be strong for others regardless of how bad you feel inside, and perform at your peak no matter what, no excuses. It's a little unforgiving, but I also do believe doctors, medics, and most nurses have to try to be at their best all the time while they're working, because people's lives are at stake. So, no "de-briefing" for us - that has to wait until we get home. If we ever do, that is. 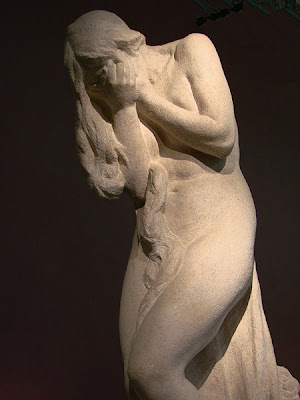 ***
The "outpouring" of care does have its rewards, of course. I am on call for four days straight this weekend and this morning had the chance to help a young boy through a procedure to reset his broken forearm. Boy in tears in the preop area, then father in tears, then mother in tears, but in the end all went well, and it was one of the smoothest anesthetics I've given a child that age in recent memory. Child woke up fully in the PACU sleepy but comfortable and calm. One can't ask for more than that.

Did have a chance to come home for a little while...just in time to wave goodbye to my family as they drove off for a school vacation week ski holiday without me. With any luck I'll be able to join them some time next week...maybe "de-brief" a little...
Posted by T. at 1:14 PM

Very nice T. Hope you make the ski trip and get "de-briefed".

While everyone else is on the slopes I'm hoping to read a little, write a little, sip tea, stare at the view, practice oboe, eat pie, and watch movies or reruns of Bones or Dr. Quinn Medicine Woman, not necessarily in that order!

It's interesting that so many of those folks at war in these 4 venues (even your beloved Bones, I'll point out) look to "hard" things for a rescue. Hard science, hard facts, solid plans, etc. They have so little use -- and so great a need! -- for the "softer" practices of peacemaking, psychology, and psychiatry!

(These don't always change the war, but can help those who battle...)

For the war folks it may be a matter of self-preservation to rely on the hard and fast, the sure and the concrete, but in the medical world I think it's arrogance and hubris in many cases. Rational empiricism is considered superior to things intuitive, spiritual, or touchy-feely in any way.

Someone ACTULLAY echoed Bones to me once by saying something like, "You write about faith? But you seem so intelligent / educated." I didn't mind, though. I have the very same thoughts about myself.

So, faith's disdained, psychology is poo-pooed, but peacemaking's ok, though, if you call it "conflict resolution..." (It's kind of like the annoying phenomenon of taking plain old respect for others and good breeding and re-labeling it "political correctness.")

...and compassion's acceptable, too, if it comes under the umbrella of "sensitivity training," and you use a lot of "hip" language from corporate communication and social psychology seminars.

*Sigh*...seems like the "acceptable" language / discourse / approach in these systems involves anything that will remove even the SUGGESTION of emotional investment...I mean, what's more emotionally invested than compassion, "to suffer with" another?

But that's just it...feelings make you "weak" so you're supposed to block them out...My paramedic friend says in the EMS world, the ones that feel deeply about their work and their patients burn out, and the less "feeling" ones stick it out, so maybe there's something to the "hard" approach. It does help one continue to function...but at what cost?

I think we all love fifths and minor scales, particularly harmonic ones. I have been thinking about this for a long time, and I think that our love of fifths comes from our love of musical possibility. A fifth can be the outline of a major or a minor triad (but nobody knows which when it is just hanging there, open). It also is filled with really rich overtones, some that we can hear, sort of, and some that we can only feel. There is nothing that leads the way to creativity than possibility. Fifths let us feel it all the time.

The interval of a fifth also has what I like to call "plotz." You can move around the notes a bit, and you still get a fifth. It can be out of tune, just slightly, and it doesn't bother anyone. It actually just gains a bunch of different colors from the overtones that get excited by it. Fifths are strong, sturdy intervals, used both harmonically (vertically) and melodically (horizontally). The fifth degree of the scale is called the dominant for good reason.

Harmonic minor, with its raised leading tone, is exciting because it kind of stretches the edges of the tonality. That leading tone can actually be really high, and it still points the way to the gratification of resolution.

I like what Oliver Sachs says about the gratification of music, and it is true. Absolutely. We love cadences because they fulfill our deepest and most immediate musical wishes all at the same time. We love dissonance because of the relief of its resolution. That raised 7th degree is just about as dissonant as you can get, and there is nothing quite like a resolution to the tonic to make you feel both relieved and exhilarated at the same time.

The other interval I just love is the lowered second degree when it is used in a major scale--so you get a half step on either side: one going up and one coming down.