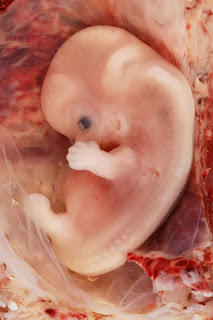 I had to help take a life recently while on call.
A woman came into the emergency department with abdominal pain. An ultrasound revealed a tiny beating heart in her pelvis - in a fallopian tube, not in the uterus. An ectopic pregnancy.
These can be lethal.
Among three possible treatments for ectopic pregnancies - methotrexate (a drug to promote reabsorption of the fetus), salpingostomy (opening the fallopian tube to remove the "products of conception"), and salpingectomy (surgical excision of the affected fallopian tube) - only salpingectomy is considered morally licit by the Catholic Church, because the death of the fetus can be considered an unwanted but, unfortunately, inevitable by-product of a procedure done specifically to save the mother's life (rather than a direct consequence of the treatments, as it would be in the use of methotrexate or salpingostomy). Some might argue that this kind of hair-splitting is silly when the end result is the same, but I think the idea, for members of the Catholic community, is that intention really matters.
Aquinas first articulated this principle of "double effect" in his writings about self-defense: "Nothing hinders one act from having two effects, only one of which is intended, while the other is beside intention...Accordingly, the act of self-defense may have two effects: one, the saving of one's life; the other, the slaying of the aggressor...And yet, though proceeding from a good intention, an act may be rendered unlawful if it be out of proportion to the end. "
I am no theologian. I try to act according to my conscience and to be mindful of my choices. I wasn't thinking about Aquinas, or double effect, or any fancy ethical theories the night I gave this woman anesthesia for a salpingectomy. All I could think, as I held her hand and reassured her that she wouldn't be alone, as I watched her smile bravely but with small tears trickling into the corners of her eyes, was that I needed to execute an anesthetic that would maximize her safety and minimize her pain. The anesthetic itself went smoothly, no problems. But all through the case I kept thinking about those tiny tears trying not to spill down her cheeks, and I knew there was so very little that I could really do for her.
Just hours before, I had placed an epidural for a woman expecting her first child to enter the world that day. As the surgeon removed the small, dark-purple sac from our current patient's body, I winced thinking of the little life that was getting snuffed out. I felt sad, especially because I knew the mother was sad about it. Then I turned back to the mother and prepared her for her awakening.
Posted by T. at 3:54 PM

It must have been a difficult day for you. While there's no way around taking that little life in such a situation, I'm sure it's painful.

As for the Catholic Church's position on salpingostomy vs. salpingectomy, that's a real hot spot for me. I'm no theologian either, but if _intention_ was truly at the heart of the Church's position, it seems there would be greater consistency in their positions on other matters of reproduction. And NO, I'm not trying to start an abortion debate here...I'm thinking more along the lines of assisted reproduction.

I'm sure I don't need to tell my favorite anesthesioboist that medicine changes very quickly; it's difficult for even those in the field to stay on top of current best practices. While the treatments for ectopic pregnancy haven't changed all that much in recent history,the Church just hasn't kept up with the moral debates and realities of other aspects of reproductive medicine since the time of Aquinas. Instead, it seems evident that the Church's policy is guided by old men who neither know nor care about the realities of these issues. Considering that the only acceptable outcome is the one that causes the greatest pain and damage to the woman, it's hard not to see yet another misogynistic policy at play here. Christ is not at play in this part of the Church!

If intention mattered more than practice, there would be more concern demonstrated for the overall well-being of the men and women affected by these issues. If _intention_ mattered, women wouldn't be told that prayer and faith should be enough to make a child, wouldn't be told that infertility or disease is "an act of God" that they must accept quietly, wouldn't be shunned as sinners for accepting medical intervention. Moreover, the voice of the hierarchy that gives these messages wouldn't give them without actually informing themselves about the reality of the issues.

And where is the support from the Church after a woman has a painful surgery to remove her fallopian tube and a child she may have wanted desperately? When she deals with fertility issues after losing a fallopian tube? Not knocking at the door, not waiting as she wakes to dry her tears, not holding her hand and walking a long journey of physical and emotional healing. Even if she seeks counseling from a priest, who does she find but a man who cannot understand the struggle and moral debates that go on for those trying to have a child, mourn one, or raise one.

My issue is not with you, but with an antiquated and broken teaching of the Church, so I'll stop here with an apology for poking at a sore spot after a difficult call.

I have not experienced our Church as one that teaches about our hardships and sorrows as "acts of God," but that may just be luck-of-the-draw in terms of the pastoral contact I've had. I guess I've been pretty fortunate!

I think Christ directly addressed this concept in his teaching when he spoke about the Tower of Siloam that fell and killed a bunch of people, or about diseases (congenital and acquired) needing his healing touch: neither people nor their sins nor their ancestors' sins were to blame, and I don't recall that he claimed God was to blame either.

I do agree that the Church has a long history of being pastorally unsupportive of women and of lacking understanding. But as for where the support can be found in the Church...hopefully wherever Christ's absent face and hands become visible again, which could be anywhere in the Church, not necessarily among its priests and hierarchy.

It's not all bad. Even the highest in the hierarchy can express empathy for women's sorrow. I distinctly remember a line from one of the encyclicals - maybe Evangelium Vitae? - in which the pope SPECIFICALLY said that women who have suffered through abortion should be not "shunned as sinners" but supported in their sorrow.

But again, I agree, the Church has a long way to go to understand its members fully, be truly compassionate, and stay true to the spirit of Christ's teaching. It may always have a long way to go. I suspect we all do one way or another.

Hmmm...I've had a couple of "thud" postings lately....doesn't anyone want to challenge my angry ravings? Join in? Didn't mean to be a conversation stopper....

I don't think you're a conversation stopper, speducatorlvc. I think you're articulate and brilliant. I just think the readership here is pretty tiny, and those who do read these posts, for whatever reason, for the most part tend to be pretty quiet on the comment boards.