Sounds in my Brain, Music in my Soul 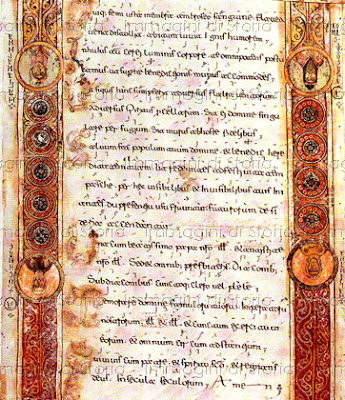 Manuscript of the Exultet in Bari, Italy, c. 1030
Yesterday after some long tones and half-hole transitions I practiced my dreaded E flat major scale over and over and over again. I dissected it into little pieces and repeated those little pieces till my left hand was aching. I put it back together (still not perfect, or even good) and played it again, and again, never once getting it perfectly smoothly, but at least feeling less of a struggle toward the end.
Then I moved on to my Ten Little Studies by Gordon Jacob, of which I'm only tackling the first three for the moment, and whaddya know...they came out better than the last horrible, discouraging, frustrating, doubt-inspiring practice session I'd had. I need to warm up the way I did more consistently - something Kyoko's already advised me to do but which, like the impatient little kid that I am, I sometimes try to slide over.
For dessert I worked on a transcription of the flute Intermezzo from Bizet's Carmen because I thought I deserved a little "Shugah...oh, honey honey." The task was way over my head but there was no one else in the house to hear the slaughter, so I had a grand old time.
***
I'm working my way through Oliver Sacks' latest book, Musicophilia, about musical enigmas in the lives of patients with neurological anomalies. So I've had "music and the brain" on the brain, so to speak. And what I want to know is why, oh why, do I love perfect fifths and harmonic minor scales, or pieces constructed around them?
Did I live in a biblical or medieval era in a past life, or something?
Is my brain just innately partial to a raised seventh degree?
Is everyone's?
Do I love the oboe because it's particularly beautiful playing pieces built on a harmonic minor with lots of perfect fifths thrown in?
I first learned about harmonic minors at a very young age. I think I was still living in the Philippines, taking piano from Mrs. U, so I was younger than nine. They have stirred something in me from the first time I learned to recognize and play them. They sounded exotic but familiar, ancient, mysterious; they spoke to some place deep inside me even at that young age.
In college the choreographer for the jazz dance company I was in created a piece to Peter Gabriel's "The Feeling Begins" from Passion, his soundtrack for The Last Temptation of Christ. "Biblical" sounds galore. Harmonic minor music saturating my every move, until I felt totally submerged and transported, connected to a different time and place. What is it about the stuff that does that to me?
I was just reading an old Scientific American article entitled "Music and the Brain," by Norman M. Weinberger, from a 2004 issue. I learned the following interesting things from it:

-People were already playing on bone flutes about 30,000 years ago.
-The brain doesn't have a discrete music "center" per se; music stimulates many areas of the brain, and does so differently depending a person's learning and experience.
-Harmony and timbre are processed in the right temporal lobe.
-Brain cells' response to a given tone is modified by that tone's location within a given melody; the response is different if the tone comes first or is found in the middle of a rising or descending passage of music.
-"When a symphony's denouement gives delicious chills, the same kinds of pleasure centers of the brain light up as they do when eating chocolate." That explains a lot.
-A person with bilateral temporal lobe damage may be unable to recognize music, or distinguish between two very different melodies, but may have normal emotional responses to a piece of music because her frontal lobes are intact.

This kind of science is fun to read about. But it doesn't solve the deepest mysteries that I often wonder about.
Every Lent/Easter season I think a lot about this because there is an ancient piece of music - from somewhere in the 5th-7th centuries - that is sung once, and only once, each year, at the Easter Vigil, and I look forward to this short-lived moment of pure beauty and mystery every year. The Exultet. I am deeply, inexplicably attached to and moved by the Exultet, so much so that when the music director at our current parish composed his own version three or four Easters ago, as talented a musician and composer as he is, at first I felt a little crestfallen... 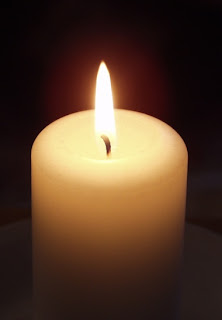 ...Until I heard him sing it. The church lights had been darkened, and inside that cavernous space, the Paschal Candle was lit in the distance, reminiscent of the appearance of light in the Genesis account of creation. The light spread from one parishioner's candle to another, slowly illuminating the church one person at a time, then he sang, and it was as if all the centuries between the time of early Christianity and ours had evaporated. He built his Exultet around a harmonic minor, and used some Middle Eastern instruments and a low, Gregorian-type of hum from the choir in the background, and it was almost a mystical experience. I still love the traditional Exultet, but MB's has taken the piece to new heights musically, and I have to admit I think I love his even more, which I never would have thought possible. His Exultet has now replaced the traditional one at our parish, and he has also composed a set of psalms along the same musical themes to carry us through the rest of the Easter Vigil. I think this annual ritual is the richest liturgical experience we experience together.
I don't know what areas of my brain light up like genesis Light when I hear MB's Exultet, or why it causes the kind of mental transfiguration it does, but I know that it's for musical experiences like these that people hungrily seek, listen to, and play music, for which we seem naturally anatomically, chemically, and electrically made. Even in times of despair and devastation, music is with us, keeping our spirits alive just as food does our bodies. I was listening to NPR today and heard Reuben and Black Nature, musicians of the Refugee All Stars, talk about how music kept them going in the refugee camps after they fled the civil war in their native Sierra Leone. Music is in our blood, or brain cells, our genes, our tiniest molecules, in the deepest parts of us that these physical elements can't even begin to encompass or represent, and I, for one, am truly grateful.
Posted by T. at 7:30 PM

I think we all love fifths and minor scales, particularly harmonic ones. I have been thinking about this for a long time, and I think that our love of fifths comes from our love of musical possibility. A fifth can be the outline of a major or a minor triad (but nobody knows which when it is just hanging there, open). It also is filled with really rich overtones, some that we can hear, sort of, and some that we can only feel. There is nothing that leads the way to creativity than possibility. Fifths let us feel it all the time.

The interval of a fifth also has what I like to call "plotz." You can move around the notes a bit, and you still get a fifth. It can be out of tune, just slightly, and it doesn't bother anyone. It actually just gains a bunch of different colors from the overtones that get excited by it. Fifths are strong, sturdy intervals, used both harmonically (vertically) and melodically (horizontally). The fifth degree of the scale is called the dominant for good reason.

Harmonic minor, with its raised leading tone, is exciting because it kind of stretches the edges of the tonality. That leading tone can actually be really high, and it still points the way to the gratification of resolution.

I like what Oliver Sachs says about the gratification of music, and it is true. Absolutely. We love cadences because they fulfill our deepest and most immediate musical wishes all at the same time. We love dissonance because of the relief of its resolution. That raised 7th degree is just about as dissonant as you can get, and there is nothing quite like a resolution to the tonic to make you feel both relieved and exhilarated at the same time.

The other interval I just love is the lowered second degree when it is used in a major scale--so you get a half step on either side: one going up and one coming down.

Elaine, I loved your informative comment and didn't want readers who are interested in music to miss it, so I took the liberty of re-posting it here. Thank you!

Yesterday and today as I listened to some wonderful pieces that really expanded my horizons as a listener, I was wishing I could take some music appreciation lessons from you - though I think the pieces were really for "advanced" music appreciation learners! They were on public radio last night and this afternoon: I think one was Chick Corea's "La Fiesta" (with Gary Burton, maybe, plus an orchestra & live audience), and the other was "Tell My Fortune" by Michael Daugherty. Wow! So much of what we've been reflecting on came alive for me as I was listening to these works.

I've got to break through the limits of my experience a little more often, and discover more musical treasures. One of the reasons I so enjoy visiting and learning from your blog...! (https://musicalassumptions.blogspot.com)

I'd suggest reading "This Is Your Brain on Music: The Science of a Human Obsession" by Daniel J. Levitin. He intertwines music theory and neuropsychology in a very readable book.

Thanks for the tip, Henry! I look forward to checking it out.