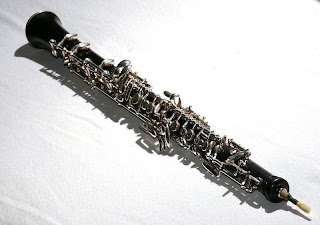 On the eve of my one-year anniversary playing the oboe I'm thinking about where music and medicine intersect. There's one obvious interface: injury. This past week I was at Johnson Strings to pick up violin books for my son - Adventures in Violinland, Books 2A and 2B - and found a very interesting book by Janet Horvath, associate principal cello of the Minnesota Orchestra: Playing (less) Hurt: An Injury Prevention Guide for Musicians. I was pleased to see that she includes information and suggestions for players of all kinds of instruments. Who ever thought playing such a sweet little instrument could be risky? It's true, the oboe is lovely, but it's also a tough task-master - sometime hard on body, mind, and spirit all at once. I made a list for myself of things I'd have to watch out for if I actually played the oboe with the ability, frequency, and intensity of a professional.

Headaches, eye strain, and eye damage. The oboe is a high-resistance instrument. Other instruments in this category include the bassoon, the trumpet, and the French horn. Playing these instruments a lot, especially when increased blowing force is required (high pitch), can put eyes at risk due to increased pressure. According to an article from the journal Ophthalmology, "The cumulative effect of long-term intermittent ocular pressure elevations during high-resistance instrument playing may be sufficient to create long-term damage to the eye."
Teeth. Horvath informs us, "Playing reed instruments, brass instruments, and violin and viola can affect a young person's occlusion...It is essential to monitor the duration and intensity of playing...Overbite can occur in oboe, bassoon and violin and viola players even after only one or two years." She quotes the Journal of the American Dentistry Association which states, "Because less than 100 grams of pressure is required to orthodontically move a tooth, the forces of a musical instrument (up tp 500g) can harm the occlusion and teeth."
Hearing loss. Chronic exposure to the decibel levels of a music ensemble such as an orchestra at close range can place musicians at risk for hearing loss, which is irreparable and which, in a musician, can be devastating even if subtle.

Thumb issues. Most of the oboe's weight exerts its force against the right thumb, so pain syndromes can occur as a result of thumb tension, tendonitis of the extensor tendons at the joint, and De Quervain tenosyovitis, a condition in which there is inflammation at the base of the thumb. Loading stress on the thumb is exacerbated by holding the thumb straight (rather than flexed) while load-bearing for long periods of time - a tendency I definitely have when I hold my instrument, which of course as luck would have it is the heaviest oboe out there.
Finger, wrist, and neck pain. Keys in an odd position for one's hands can cause strain and lead to pain. The stresses of reed-making can increase the risk of developing carpal tunnel

syndrome. Poor position or neck straps (which benefit the thumbs) can strain the neck. An endpin or commercial oboe support like the FHRED might be a viable alternative to take the weight of both neck and hands.
Respiratory issues. Oboists can be vulnerable to upper respiratory tract infections, but playing a wind instrument, which at times can mimic exercises such as incentive spirometry used in hospitals, can also confer some respiratory benefit by conditioning respiratory muscles.
Focal dystonia. This is a rare neurologic condition that is thought to be caused by a "blurring" of the "map" of the human body contained within the cells of the cerebral cortex, where normally specific cells are "assigned to" or "responsible for" specific areas of the body. In focal dystonia, these "assignments" can get jumbled such that the brain sends nerve impulses to the wrong muscles, causing them to contract - a phenomenon which is experienced by the individual as painless "cramping," abnormal positioning, or an inability to rely on intentional movements for certain tasks. It is task-specific, often affects those who engage in large amounts of fine motor activity, and affects men more often than it affects women. Frequent intense repetition is thought to be contributory. Sensorimotor retraining activities, sometimes using mirror boxes, can be helpful, but medical treatments and acupuncture are not. Notable people with this condition include oboist Alex Klein, pianists Gary Graffman and Leon Fleisher, and writer Scott Adams of Dilbert fame.

Some of Janet Horvath's suggestions for musicians, to reduce the risk of injury:
Warm up.
Maintain good posture.
Vary your movements.
Wear hearing protection.
Take breaks / get enough rest.
Keep instruments well-adjusted.
_______________________________________________________
Addendum 5/16/06: Patty at Oboeinsight.com reminded me,
"But T., you didn’t write about mental health. About how crazy we go over reeds. Over the fear of failure. The humiliation we sometime face. Nerves that can eat us alive. All that fun stuff!
"And I continue to wonder, too, about the cane we use. I’ve known of so many reed players (single as well as double) who have had cancer. Far too many. Could it be something that’s in our cane? Does our cane get sprayed with something? Insecticides? Anything? Where does it grow and how clean is the area? (One oboe maker told me I’d really rather not see where cane is grown! He said I might not want to play any more.) Maybe it’s just coincidence that so many reed players have had cancer, but I do wonder. (All the ones I’ve known are non-smokers.)
"And then there are the joys too. Those great job rewards! I’m guessing lots of jobs bring people joy, but I sure do read a lot of complaining from people in other professions. While I ramble on a lot about rotten reeds and other negative issues, I wouldn’t want to give this job up. There are too many wonderful things about it!"
Thanks, Patty!
Posted by T. at 7:08 PM

This all makes sense to me. I recall playing the clarinet, an instrument that forces your fingers into unnatural positions. I am sure various instruments pose all kinds of risks.

Nice site. You might be interested to learn about forms of non-ivasive brain stimulation which are being utilized to 'organize' the neuro signal disarray which effects dystonia sufferer. My colleague and I are working on this, and utilize a closely related strategy for chronic pain as well.
Best wishes, RH, M.D.

Rhea - thank you for stopping by.

MJB says: Nobody mentions students' reeds; i've seen reeds that are health risks in themselves: black mold growing inside the two halves of the reed. Yuk!
I too have long wondered about the risks of lip cancer due to cane. This would be an interesting study actually.

Was just reading about an oboe player in the San Francisco symphony who had tonsil cancer. Successfully treated for that, later he suffered a cerebral hemorrhage while onstage. Intrathoracic pressure leading to increased intracerebral pressure?

I knew a trumpet player who got an cerebral aneurysm at 18 years old. A/V Malformation predisposing? I dunno. Is the incidence higher among brass or woodwind players?

Hi! Thank you for posting about health risks of playing oboe. I've often experienced headaches when playing on a very resistant reed -- which seems to be the fashion in the U.S. since about the '70s (because of the darker tone it generates, promoted by Marcel Tabuteau, John Mack, and others). I'm thinking of learning to make much easier reeds.
Have you heard of or tried the book "Oboemotions: What Every Oboist Needs To Know About The Body"? I have it and am reading it now (I used to get tendonitis when I was a teen and training for a music career).
I hope this helps!!!