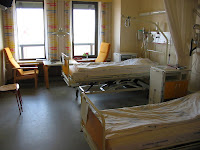 Welcome to St. Boonie's!
St. Boonie's Hospital is a semi-fictionalized institution based on the three in which I practice. It is situated among a bunch of dairy farms in Elsewhere, New England. For the most part it takes good care of its patients and ships the really tough ones to The Big House, somewhere beyond all the pasture land.
I was going to call this post "Why I Can't Leave the Periphery of Excellence," in homage to a post at the blogofbleedingheart entitled "Why I Left the Centre of Excellence." I'm trying to figure out why, for all my behind-closed-doors moaning and complaining about work (which almost all of us do at one point or another, right?), after interviewing at several other possible work places all of which have made me attractive offers, I am still at St. Boonie's.
I think it's because I love village life. And St. Boonie's is just that - a village, a small town, with a sense of community and familiarity, but also with its share of the same frustrations and misunderstandings that might beset those who inhabit a small town or a family.
By way of introduction to some of those frustrations and a typical St. Boonie way of coping with it, let me introduce you to the Potty-Mouth Bucket. 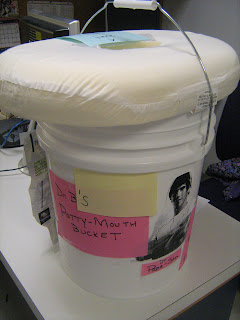 We have a surgeon I will call Dr. Buddock who has a puerile habit of whining, speaking rudely, and/or expressing himself like a stubborn spoiled brat when things aren't quite the way he wants them to be. He was written up recently for his failure to refrain from frequent use of the "F" word in the O.R.
The incidents were addressed formally, of course. But after the smoke cleared, the nurses put together this contraption. He's supposed to put in a dollar for every expletive, $10 for each tantrum, and $20 for a meltdown. Yes, there is money in the bucket. We use it for chocolate. 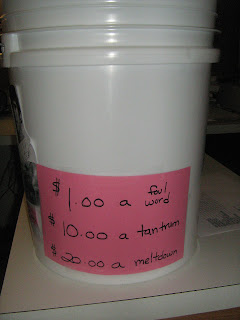 Ah, St. Boonie's - where in the O.R. scheduling office instead of a portrait of Virginia Apgar or Rudolf Virchow, we have...Johnny Depp. 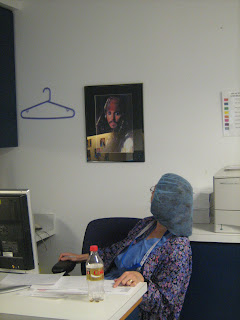 Look out for another installment of Tales from St. Boonie's, wherein I muse about the case of the disappearing hummus...or about the singing pig who makes rounds...or perhaps about why Fabio is standing in the lunchroom...
Posted by T. at 5:04 PM

I think I might want to work in an small-town area once residency is over. I interviewed at a nice place that, even though was located in a small town, received enough from the surrounding area to have a very attractive program - I ranked them 2nd. I loved the town, it was awesome.

Why didn't I ever think of the bucket??? Oh, there are so many spoiled surgeons (and a couple of gas-pushers) who I could've used this on. Shoot, we could've had dinner every week on the proceeds from one of them alone!!

The great thing about the hospitals that make up my semi-fictitious St. Boonie's is that unpleasant or spoiled surgeons are more the exception than the rule. Another reason it's tough to contemplate leaving the place - even the surgeons are nice!