I laughed out loud over breakfast this morning when I read this excerpt from Elaine Fine's beloved copy of Incomplete Method fur die Holzblasinstrumente (if it won't enlarge when you click on it try this link): 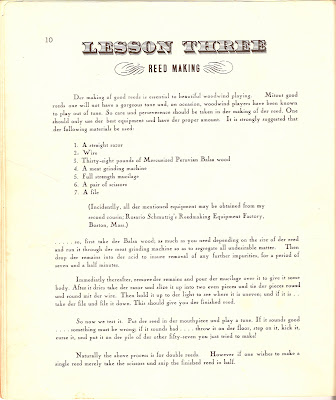 Thank you, Professor Schmutzig - I'll remember to stomp all over the reeds I under-soak, over-scrape, and chip as I tie!

This made me think back to my own childhood. What books or other treasures did I carry around with me everywhere or have my calligraphic scrawl lovingly inscribed on them? What would I rejoice over if I were to find it again in some not-for-yard-sale box in my closet? What would I put in a "time capsule" today, and would it still be a treasure years from now, when I finally turn my house into an archaeological dig and unearth it?

The book I remember carrying around and poring over endlessly when I was in grade school was a volume entitled The Hodgepodge Book: An Almanac of American Folklore; containing all manner of curious, interesting, and out-of-the-way information drawn from American folklore, and not to be found anywhere else in the world; as well as jokes, conundrums, riddles, puzzles, and other matter designed to amuse and entertain - all of it most instructive and delightful by Duncan Emrich, illustrated by Ib Ohlsson. I must have checked it out of my school library a dozen times.

As for my time capsule...I'm realizing that the things I enjoy today, as much as I enjoy them, I could ultimately live without. I have tremendous fun when I dig up unintentional time capsules - a box of school day mementos, gifts from faraway loved ones, old letters and photos. And I do have pack-rat tendencies with the like. But I can't think of what I'd put in a capsule at this stage of my life. A laryngoscope? Too useful to store. An oboe? Need it beside me, and too expensive to hide. Missives? Pictures? Programs from shows? News articles? Maybe. But maybe it's a good sign that I don't have too many ideas or any real desire for creating a time capsule right now. I'm hoping it means I'm living in the moment as much as I can.

My daughter, on the other hand, has actually put together a time capsule with her dearest friend, a lovely boy I'll call Adam. That I can totally understand. They are in the waning years of what we're hoping has been a happy childhood, about to enter adolescence. Adam expects to be moving away. I think if I had a friendship as special as theirs I would certainly commemorate it with a time capsule to open in later adolescence or even adulthood. I don't know what they've included in it, but I don't want to pry about it, either. They really have a wonderful relationship that deserves its own space and time in the world.

Last night Adam was over along with our niece and nephew, and the five kids played delightful games on the giant trampoline 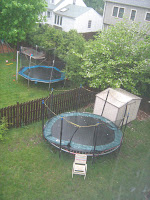 in our back yard. (As a former pediatrician-in-the-making I was at first reluctant to accept the apparatus, certain it was an unadvisable threat to our kids' safety, but I've slowly come around to the idea that it is, as my husband says, "the best 50 bucks we ever spent.") The four kids next door have a trampoline in their back yard as well, so sometimes there are double-trampoline neighborhood ball tosses in addition to the usual rounds of Sardines, Ghosts in the Graveyard, and our contribution, a game called Signal in French, till dusk.

As darkness set in and voices of parents called to their young to come in for baths and showers or pre-bedtime activities, Adam and my kids found themselves sitting or lying on the trampoline talking quietly together. My second story window overlooks the back yard, so I can see the kids down there, but I can only get snatches of their conversations, and I found myself smiling as I overheard bits and pieces like, "What's said on the trampoline STAYS on the trampoline!" And..."Trampoline secrets!" It's hard not to want to be a closer fly on the wall, and I have to laugh at my fantasies of hooking up a microphone to the underside of the giant disc just to monitor for sketchy content or misinformation. But I also believe kids need and should have this protected, private space and time for their own conversations...even if they sometimes stumble or misuse it, as we all have. Their expanding minds have bouncing of their own to do, off each other.

I was awed and delighted as these snatches wafted up from my daughter's lips (by this time, her brother had gone in for his shower, and she and Adam were looking up at the sky and talking quietly by themselves): "Seriously, why are humans here?...Why are we even alive...?...The world is tiny. It’s, like, one of the smallest planets...Our sun is one of the smallest stars...a little speck...So what are we?...Think about the poor molecule!” I wonder what their answers were. I would have loved to have been part of their conversation. But I also love that they were having this kind of conversation alone with each other, challenging and learning from one another, and having such a nice, peaceful time. Not long afterward I heard my husband's voice from a downstairs window calling them in out of the crisp evening air. I caught only timbre and rhythm then, a few last words, snatches of song and laughter, before they came into the house for the night. 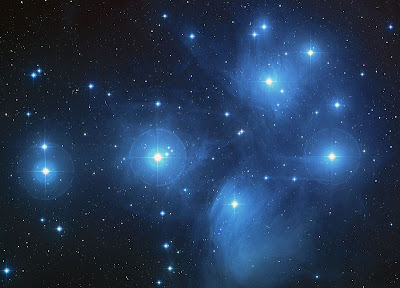