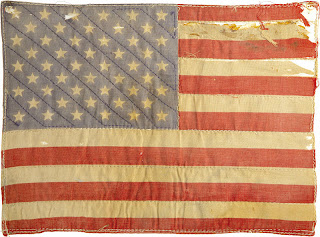 As a working mother I am exasperated by those who, without knowing Sarah Palin at all, question just on principle whether she can be effective both in her work outside home and in her role as a mother.
I mean, come on. Are people still so ignorant as to believe that it's impossible for a woman with a career to be a good mother? Or that a woman with children can't be as capable at her work as a woman without? Or that a woman who works only in the home and not outside of it contributes less (or more) to society than a career woman? Come on.
But that's not what I'm most appalled about.
I am appalled that anyone who calls herself a true, loyal American, or feels prepared to assume leadership in the United States of America, should criticize her opponent with the statement,
"Al-Qaeda terrorists still plot to inflict catastrophic harm on America, and he's worried that someone won't read them their rights."
I was already appalled by the way she insulted community organizers by implying they don't have "actual responsibilities," but I was even more appalled at what followed that jab and the one above: applause.
Applause by people who consider themselves true, loyal Americans, living in a country founded on principles of respect for human and civil rights (and by de facto community organizers, no less, who rallied people together for the common cause of independence).
Now, I know what the Constitution says. I know Article I, Section 9, states, “The Privilege of the Writ of Habeas Corpus shall not be suspended, unless when in Cases of Rebellion or Invasion the public Safety may require it.”
But I think this article needs to be interpreted very narrowly. I think the leader of the so-called free world SHOULD be worried about reading people their rights. Even a state of war doesn't entitle this country to abrogate the very principles of jurisprudence that have been established to ensure that decisions are predicated upon facts rather than feelings.
It's bad enough that the current administration has pretty much killed habeas corpus. But to take pride in that, and sneer at those who would uphold it? It's that kind of disdain for The Other that betrays an underlying sense of entitlement, arrogance, and complacency in a society, as well as that society's ignorance. It's only by consistently respecting human rights that we avoid becoming like the very Enemy we consider so hideous and against whom we hope to prevail.
Posted by T. at 9:29 PM

Thanks for pointing this out. I, too, was appalled when I heard the "read them their rights" line.

It's one thing to disagree with Obama's policies. It's another thing to lie about them. It's just plain disgusting, though, to ridicule him for advocating fairness and human rights.

Bravo, T. The dishonesty and cynicism of these speeches should give any voter a lot to think about.

Ericjay, I thought your post entitled "She put on her own coat!" was informative, entertaining, and just plain great: http://ericjay.livejournal.com/166055.html.

Michael, in the body of this post I took the liberty of linking to your blog post on the subject of community organizers, which I thought was great too: http://mleddy.blogspot.com/2008/09/community-organizer.html.

At least she didn't mention that Black Supremicist Church he attended. And don't worry, I won't be offended if you don't publish this, I know how things work with your kind.

My "kind" believes in freedom of speech and discursive candor exercised in a tone and atmosphere of respect.

For the record I thought John McCain's speech last night exemplified this.

Know who else suspended it?

Abe Lincoln. Yeah, it needs to be done in certain cases.

Superbadjack, that's actually the opening example cited in the New Yorker article to which I linked in the body of this post.

Thanks for stopping by.

My stomach literally flipped when Palin delivered the "reading them their rights" line and people applauded and cheered. My reaction on Twitter at the time was "Just got to the part about reading rights...yeah! Screw Roe v Wade, let's overturn Miranda! Nauseating."

Well said, thank you. Reading one's rights is really about making sure a person who's being arrested understands the basics of the law regarding their arrest and has the power to get legal representation and to decline to be questioned without such representation. It's central to justice, and while we don't always succeed at being just, it's what we should strive for.

How can she not understand that?

Yeah, read Mr. Terrorist his rights, preferably in his native Arabic or Farsi so there's nothing lost in translation. Of course he won't understand cause in his Country they cut off your testicles if you wipe with the wrong hand. And just a little hint, Jan 20, 2013 its gonna be PRESIDENT Palin, maybe earlier if McCains Melanoma acts up.

Dr. Drackman, any effectiveness you hope to have in making your points/expressing your views is completely undermined by your vulgarity.

I think it would be great if we who espouse opposing political views could actually learn from one another through dialogue, but I think I speak for many people in this forum when I state that we learn nothing from your sarcasm other than the suggestion that perhaps the stereotype/image of the contemptuous, sarcastic, condescending, cynical, disrespectful conservative might actually have something to it.

I prefer not to validate such a stereotype, however, based on one commenter who has already been asked more than once to show courtesy on this blog. If, as it seems, you are unwilling or unable to respect that simple request, I would ask in turn that you visit other blogs instead that are more to your liking or that would be more receptive to your rude tone, which only does your party and your profession a disservice.