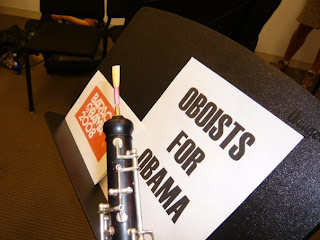 Someone found my blog today searching for the phrase "oboists for Obama."

WHY DIDN'T I THINK OF THAT?!

There is a group (on http://www.barackobama.com/), and they have this cute logo (notice oboe bell at bottom of logo) and even cuter description:

(There's a Facebook group too - thanks, Dragonfly, for the suggestion! - where I got the above photo. Someone sent me a video of some members of the Facebook group playing "Hail to the Chief" but I can't figure out how to embed it...)

I have to admit, though, that I honestly still can't think of myself as an actual oboist, considering my still-a-beginner-now-and-perhaps-forever status. But to be a Barack Oboist I'd consider allowing myself the promotion!

I felt the energy today as I shared a thumbs-up from my car with a total stranger who was planting campaign signs along the road in New Hampshire.

I think this man has the potential to be one of the greatest leaders in American history.
Posted by T. at 11:39 PM