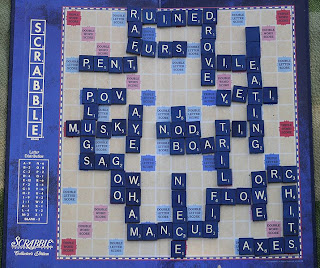 I think I might have a mild case of synesthesia. Ever since I was little I liked or disliked certain words because of the way they "tasted" in my mouth when I said them. I wouldn't get a physical taste sensation, exactly (hence the reason I call my case "mild"), but certain words evoked pretty specific taste experiences for me. The word "song" tasted like a buttery Filipino sponge cake called mamon. The word "hate" tasted like cheddar cheese.
When I looked up synesthesia on the web I learned there's actually even a name for this: "lexical-gustatory synesthesia," which is supposed to be a rare type. Figures!
It seems my brain likes the taste of words with the "r," "gr," or "cr" sound in them: Christmas, cryptography, graphite, garrison, gripe, grammar, figure. I recoil from "p" and "n" in close proximity, though: penis, panty, pons, nape, nope. Ugh.
This trait, or whatever it is, adds an interesting dimension to my day-to-day life in the hospital, wherein I spend my day speaking a different sub-language for hours on end.
Medical terminology has its treats that roll trippingly off the tongue. Chordae tendinae. Fulguration. Nissen fundoplication. Cardiac contusion. Urticaria. Hyperbilirubinemia. Gammaglobulin.
Then there are those shudder-inducing words and phrases. Spermatogonia. Bile ducts. Mastocytosis. Morcellator. And my all-time un-favorite, a phrase I dislike intensely, probably more than any other: pulmonary toilet. Yuck.
I have no idea what this little phenomenon of mine says about the way I think or function. I don't think it means I am either cognitively impaired or unusually gifted, more creative or less creative than the next person. In fact, I don't think it's anything more than a personal curiosity. I think my brain just happened to connect a few wires differently while it was growing. Maybe there are indeed extra connections between my insula and my temporal lobe* (there goes that temporal lobe again!).
I was wondering while listening to a symphony in a minor key the other day how it is that certain sound frequencies in combination produce such dark emotional associations for us, and how other sounds and chords evoke lighter, brighter moods. What explains that? It must be something similar to this word-taste synesthesia. Why is it that a plaintive passage can conjure up the image of a weeping, suffering person, or such a person's words or feelings, even though the sounds themselves don't resemble actual weeping? Is it because certain harmonies set off different parts of the temporal lobe and limbic system? Rationally speaking a sound is a sound is a sound - vibrations hitting the eardrum and ossicles - but the brain interprets these physical phenomena in such complex ways. I wish I could ride a sound wave and follow it into the mind, see what electric impulses and neurotransmitters get fired, study from my unique vantage point why certain connections get bridged and not others. But even if that were possible, I have a feeling the mysteries of music and language, of sorrow and joy, wouldn't so easily be solved.

While it's not as sensual as what you're describing, I too am repulsed by the phrase "pulmonary toilet."

I don't like the word nipple. In any context.

I left you a shout out on my blog today...Happy Thanksgiving!

I always associate music with flavor. Sometimes people laugh at me when I use words like spicy or sweet or salty to describe harmonies. A friend of mine is doing some work on the connections between music and spices during the Middle Ages, particularly in France (she found a chance connection in a manuscript).

Elaine - I feel less alone now. And what a wonderful project your friend sounds like she's working on...I'd love to hear more about it!

Wow...fascinating! As someone who's always had a sort of love affair with words and writing, I found this really interesting. It also brought me back to the rather amusing experience of having to take a course in medical terminology in college; because I already had been bathed in this particular jargon, it was actually fun to tease the instructor on occasion. My least favorite? Something like "ophthalmology" (doesn't roll off the tongue very well if pronounced correctly); I always had fun with the super long words though, like "esophagogastroduodenoscopy". That was impressive when correctly said by a precocious 8 year old!

Certain frequencies go well together such as those in Major keys. However, certain chords in minor keys have frequencies that clash easily which create a distastefulness in mind. That's why when a chord resolves, it gives the piece a hopeful tone (why the 2nd of the major and minor scales are called the hopeful tone in music theory.) Without these emotional connections, there would be no great music created. It'd be a bunch of noise.