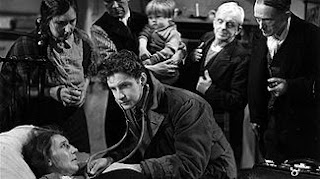 Almost a year and a half ago I wrote a little post about physician writers in which I mentioned the Scottish physician and author A.J. Cronin.
Over the weekend my family and I watched the beautiful Gregory Peck film The Keys of the Kingdom, adapted from a Cronin novel by the same title, and once again I marveled at how those "old" black-and-white movies are able to capture children's attention simply by the power of story and character.  My kids were riveted to this poignant tale of a humble but courageous missionary priest in China and the nun who ends up working at the same mission.  No flashy special effects.  No flying superheroes, fancy gadgets, or magical worlds.  Just multi-layered, imperfect human beings trying to overcome their problems with dignity, creativity, humor, and kindness.
Today I watched a very different Cronin story, the 1938 film version of The Citadel, on Youtube (starring Robert Donat as Dr. Andrew Manson, also starring a very young Rosalind Russell, Rex Harrison, and Ralph Richardson!).  I was completely flabbergasted by the medical and medico-cultural practices depicted.  The following exchange between Dr. Manson and Christine Barlow sums up the prevailing paternalism of the day:
Christine:  "Why do doctors always write their prescriptions in Latin?"
Manson:  "So their patients don't know what they're getting."
Shocking!
In this film the doctor slaps a malingering patient - twice - to get her to snap out of her fake hysterics - and her sister thanks him for his effectiveness, mind you!  Also, doctors bill unfairly for services barely rendered - in much the same way the public imagines lawyers today calculate "billable hours" which might not all be expended doing actual work for a case.  Anesthesia for major trauma surgery is delivered without monitors, or I.V. access, or a secure airway (see time index 7:33 of this clip). Resuscitation protocols are non-existent; the neonatal "resuscitation" scene in particular makes one cringe.  But if you actually read Cronin's novel, the details in the writing for the latter - right down to the "joyful, iridescent bubble" of mucus finally escaping from the baby's nostril - make you forget for a moment all the flawed practices which an observer today would criticize.  Cronin can really bring stories to life.

I was first exposed to Cronin's work through the 1983 Masterpiece Theater adaptation of The Citadel, starring Ben Cross as Andrew Manson.  The one scene I remember vividly from that miniseries was one in which Manson picks up his black bag to attend to a loved one but is told even before he gets to the scene that he won't be needing it.  Being unable to help is terribly difficult for a physician, while actually causing harm is devastating.
In the film version there's a scene in which Manson finds himself at a psychological nadir - and what doctor hasn't been there, or close to it, at some point? - because he believes he has allowed harm to come to a good friend, and he finally realizes that he has strayed far from the ideals with which he began his career.  He is more than discouraged; he is contemplating giving up.  As a doctor, every day you face the unknown - "as though you had to take some citadel you couldn't see but you knew was there" - and it can be stressful and worrisome and disheartening, especially since you so often undertake the siege feeling quite alone.  But as A.J. Cronin once said, "Worry never robs tomorrow of its sorrow, but only saps today of its strength."  And so an inner voice comes to his flawed protagonist and says,
"You must carry on.  You must keep on hoping and trying.  That's a doctor's job."
I should print that out and paste it inside my locker.
Posted by T. at 9:08 PM

Another one added to my list of must read/watch. Thank you for the incite. It must have been an interesting time back then for physicians. I couldn't imagine surgeries done without anesthesia. I have dealt with malingering patients and my reaction was "sayang ang pera ninyo". Imagine having to pay admission, CT scan and subspecialty doctors just because the patient is malingering. I've gotten my way through patients who hyperventilate and their relatives. Surprisingly they respond well to my direct explanation.

But as A.J. Cronin once said, "Worry never robs tomorrow of its sorrow, but only saps today of its strength." And so an inner voice comes to his flawed protagonist and says,

"You must carry on. You must keep on hoping and trying. That's a doctor's job."

I love those lines.