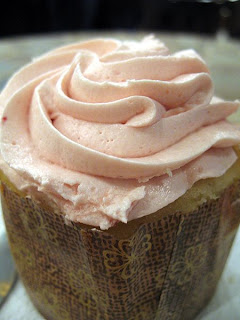 I made cupcakes last night.
Using a basic recipe from Gail Wagman's book Cupcakes Galore as a starting point, I made four different kinds:  vanilla, Earl Grey, mango, and calamansi.  They were YUMMY.
Getting ready for Mardi Gras, you might ask?  Certainly. But there was another reason.  We were celebrating.
Overcoming past audtion heart-break, my daughter tried out for her school's spring musical, Annie, and got cast in the leading role!
Now that the initial excitement has given way to imaginings - some enjoyable, some less so -about a season of rehearsal schedules, carpooling, training, and time management, my mother-worry has kicked in.
Not just any mother-worry:  anesthesiologist-mother-worry.  I am concerned about her vocal cords (picture source here). 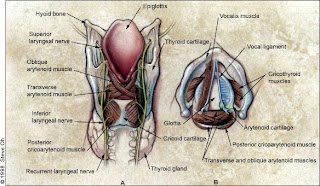 As I may have conveyed in this poem and in other posts, the vocal cords are precious to me.  I treasure my daughter's in particular. She has a sweet, lyrical, angelic singing voice, with a clarity that can make you just sigh.  She can "belt" to a certain degree, but hers is not the brassy, Broadway, belting voice that yells Annie lyrics from stage to rafters. I don't want the native quality of her voice to be changed or ruined.  I also don't want her vocal health diminished by fatigue or strain, especially with hours of rehearsals and repetition several times a week (see here for a video of the vocal cords in action).
At the same time, I am looking forward to watching her grow as an artist in a role that seems made to order, with its combination of spunk and vulnerability, and its melodies right in her vocal range.  I want to help and support her efforts as much as possible but also give her the freedom to blossom in her own way and in her own time.
This will be a journey for both of us - with me watching, caring, and helping hopefully not too intrusively "from behind the drape," as is my wont.
_____________________________________________________
There's a special gourmet edition of Grand Rounds up today at The Blog That Ate Manhattan.  Check it out!
Posted by T. at 11:28 AM

Congrats to your daughter! Beautiful cupcake.

I wish I could take credit for that particular cupcake! It's Wikimedia's... :)

Next time you have to take a picture of the cupcakes! And congratulations to your daughter.

Congratulations to your daughter! I look forward to hearing about how well she performs :-D

And wow on the cupcakes - thanks for the link to the Philippine fruits - I had no idea that there were so many fruits I'd never even heard of (increased my desire to visit and sample them for myself!)

We now have yet another thing in common - my daughter, too is an aspiring actress-singer! A good vocal coach will save those pipes...

I can never get the icing to look all swirled like that.

Hi, Dr. P - Not only can I never get my icing to swirl like that (although supposedly it's merely a matter of having a swirler-thingy), but also, despite the success of the actual cakes, my cupcake frosting turned out DISASTROUSLY (right taste, WRONG look and texture) due to a mixing/proportions error on my part. Oh well - they were yummy anyway. :)

I'm gonna get to work on finding some good vocal coaching.

I can offer you some encouragement. I found out, early on in my voice-over career, that a day of lots of work tended to strengthen my pipes, not diminish them, in the long run. Of course, I'm talking about a reasonable amount of work, not OVERwork; similar to exercise strengthening muscles, but too much at one time not being good for the body. In any case, the important thing is to make sure she uses good technique. Projection from the diaphragm, rather than screaming from the throat; that sort of thing.

Congratulations to your daughter! How wonderful.

When I was 8 years old, I wanted to try out for the role of Annie. I was told by one of the other little girls that I couldn't because I was not white. My how times have changed. Congrats again.

Anali - thanks, and if my frosting comes out presentable next time, I just might take some photos! :)

Jo - Thanks, and, Philippine fruits are WONDERFUL. I miss them so much.

Suldog - I appreciate the encouragement!

Map - my daughter is as white as her French-American father, and I've even been asked if I'm her nanny. So I don't know if times have indeed changed...but I hope they have!

BTW I was so pleased with how the calamansi ones turned out. Would you believe I've seen an American baker put out a recipe (on cupcakeblog) for ube cupcakes?! My next foray, I think, will involve an almond one, maybe a maple one, some red velvet, and...lavender. Definitely gotta try the lavender. :)

This is sick, but I miss seeing little vocal cords on the monitor during DL&B's. Those were my absolute favorite cases.

I am confident that your daughter wil not ruin her voice doing Annie. However, you might consider working with the play's director to find a vocal coach who specializes in working with kids who do musical theater singing (belting). In a city as big as Boston there's bound to be one or two at least.

It seems I have more advice than I thought...hope you don't mind!