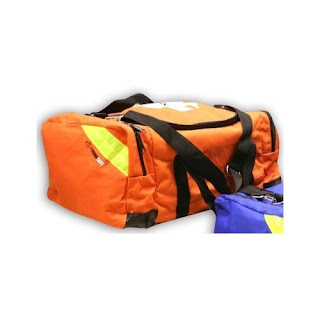 It's because of posts like this that I LOVE Michael Leddy's blog.  (In general he's learned without being snobby, articulate but never arrogant, and endowed with keen insight, sharp "eyesight," and great humor. Here he's also intellectually curious and artistically aware...)
I sometimes forget that people who don't inhabit the world of medicine on a daily basis can nevertheless be interested in its backstage area - the inner sanctum known best by those who have to live in it and with it.

One of the things Michael has wondered about is what doctors who used to make house calls carried in their iconic black bags. (See here and here for more doctor-bag links and photo credit.)  It seems so small - what could possibly fit in there?  According to this 1948 photo by Life photojournalist W. Eugene Smith, quite a lot.
During my residency years, the closest thing I had to the black doctor's bag - which represented a certain earned trust, a level of expertise attained that granted the bearer the privilege to hold some of the most important objects involved in practicing the art, as well as a connection to past practitioners - was the PACU bag.
The PACU bag was an orange duffle bag kept in the Post Anesthesia Care Unit - the PACU, or recovery room.  It was crammed to near-bursting with airway management supplies:   laryngoscopes of various sizes and shapes;  endotracheal tubes;  masks, gloves, syringes, oral airways, and LMA's; a gum elastic bougie or two; tube changers; rescue drugs.
I remember being a first-year and watching with envy and admiration as the more senior residents would get paged to code situations, grab the orange bag, and go sprinting down the corridors and up the stairs to offer their hard-earned skills to the rescue.  Then I started to accompany them to watch and learn what it was they did when they arrived.  They never let the code team forget they were physicians first and foremost - not just tube-girl or tube-boy - and insisted on being given adequate report of a given patient's condition. They took time to prepare - adequate IV flow, adequate suction - even when people were concerned about the shortage of time.  They collaborated with the rest of the team  - thank you, respiratory therapists! -  to maximize the efficacy of their work and get help to complete it if needed.
When I was deemed ready to hold the code beeper, I remember feeling both exhilarated and terrified.  Finally!  I was worthy of the PACU bag!  But wait - that meant going to CODES where people were DYING or DEAD and trying to get them ALIVE again. Ack!
To this day one of the tasks that makes my heart race with both tension and enjoyment is being asked to run to the ICU for an intubation.  I don't carry a big orange duffle bag anymore - I've streamlined a bit - but some part of me still holds, reverently, the spiritual black doctor's bag I continue to have to earn with each day in practice.
Posted by T. at 8:17 PM