Love and Wonder in a Carcass 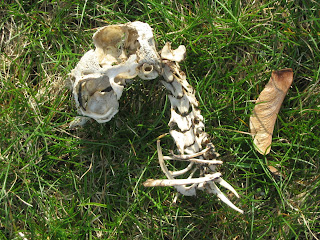 I got out of work unexpectedly early today and went for a walk with my husband around our peaceful neighborhood. The weather was sunny and cool - glorious, really. It's about time we started seeing days like this in New England.
Just as we were coming back around the block toward our house, my husband spotted something on a neighbor's lawn. It was a tiny skull of some sort attached to a vertebral column with some ribs still connected to it. The remains of a small animal picked clean of all its flesh, its dry bones curled almost into a fetal position.
I immediately went to get my camera and find my son, who was watching some of the neighborhood boys shoot hoops in a nearby driveway.
"Where are we going, Mommy?"
"I want to show you something. It's a mystery. The skull and spinal column of a small animal. I'd like your opinion on what it might be."
At this, my son acquired more of a spring in his step as he followed me to the grassy area where I had seen the bones.
"Cool."
He put his baseball cards in his pocket and knelt on the sidewalk to look at the specimen. "It could be a chipmunk," he suggested.
"That's not a bad idea," I said. "It's certainly about the right size. Shape of the head seems right too."
"Or maybe a bird?"
"Possible.  I don't know enough about the skeletal anatomy of birds versus mammals to be sure, come to think of it, though I'm thinkin' mammal."
We looked at the skull from different angles, and I noticed in the concave hollow of the base of the skull a very similar architecture to what I remembered about the base of the human skull. There was even a recognizable foramen magnum leading like a secret portal to the vertebral column.
"Hey, look at that," I whispered to myself.
"What?" my son asked.
"Our skulls are not that different on the inside from this little animal's. They're engineered so similarly.  Amazing."
I said I would go back to our house to find my anatomy book. As I got to the door I heard one of the neighborhood boys ask my son why his mom had brought him down the road, then heard my son explain about the "cool" animal bones and invite them all to look. I had a brief mental picture of a group of neighborhood boys gazing intently at the little skeleton on the grass, and I smiled at the possibility.
"Honey, have you seen my Netter?" I called as I entered the house.
"I think it's at the bottom of a whole pile of your medical books upstairs."
I rummaged through various piles of books and finally found it - an old friend from medical school, still with me after all these years. I went back outside to where the boys were shooting hoops and called my son over. I turned to the page showing the inside of the base of the skull.  "See? Remember how the animal's skull had these depressions in the bone, just like this, like someone scooped out part of the inside of a bowl? Our skulls are the same." By this time three or four other boys had gathered around to look. I was delighted with their curiosity.
I was pleased to hear, too, that they had been debating the identity of the animal. A boy my son's age had suggested a mouse. "There are some mice on B Street, so maybe there are some over there too." I agreed it was a reasonable suggestion. Another, older boy proudly put forward his hypothesis: "It's probably a baby squirrel eaten by a crow. They fall out of the trees a lot." This sounded eminently plausible to me as well.
I closed the book and started for home again. "I'll see you there for dinner," I said to my son.
My time with him had cast a glow inside me. It was as if the afternoon sunlight had managed to get through even there, to places unseen, and turn what was dark into gold. The little hollow of a dead creature's bone held our closeness like a cup. A tiny chalice pouring out wonder. A passage through death and mystery to blessed life. 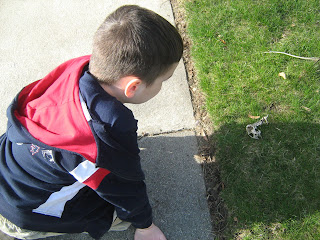