They Don't Screen For It On Med School Applications 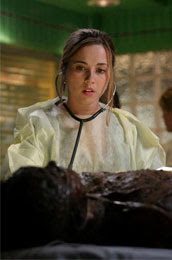 I had coffee with a good friend yesterday who is grieving over the death of his life-partner.  He told me how painful it was to be told of his loved one's death while he was driving to the hospital on the freeway.  He had told the doctor at the beginning of the conversation where he was and what he was doing, but the doctor just blurted it out anyway.
Apparently that was neither the first nor the last time this doctor had shown such lack of sensitivity. When one operation got delayed by several hours, my friend (whose partner was getting progressively weak and dehydrated) was met not with an apology but with, "Well, if you want to trust the care you get at a community hospital, you can go there."  This doctor didn't soften until my friend finally broke down in sobs in front of him at the hospital after his partner died.  Then I think the ice finally cracked a little.
I see this a lot in medicine.  I think it boils down to this:  being "Calvary-ready" or not.  People are either ready, willing, and able to be close to human suffering - to look at a weeping man, woman, or child in the eye, talk to people in distress, touch their wounds, embrace broken bodies and wounded souls, without recoiling - or they're not, and they have to build up layers of arrogance, insensitivity, and cynicism in order to function.  You're either afraid of it or willing to confront it face-to-face.  There's no check-box for that on medical school applications.  Everyone claims to be well-suited to deal with people's blood and tears.  Everyone says they want to help people who are in pain.  But some people really don't even want to be in the same room as a suffering person.
My friend was Calvary-ready.  He was in a committed relationship with his life-partner for thirty-five years - a little less than my entire lifetime.  Most of his adult life.  In the end he absolutely refused to consider letting an institution care for his loved one and learned how to do all the work himself - trache tube changes, machine adjustments, every nursing task down to the grittiest, most menial one.  For those who cannot accept a definition of marriage that includes the kind of relationship these men had:  if this isn't a model of enduring, faithful, Christ-like,unselfish, sacramental love that Christians want all married couples to grow toward, I don't know what is.
Posted by T. at 10:24 AM

Well said. I think you are spot on.

Right on the mark.

great post...I was thinking recently that before accepting students to med school that they should have to undergo psychological testing to make sure they are not sociopaths (I'm only half-joking!)...also great point about same sex couples!

A beautiful post. So sad yet true. Some people just are not born empathetic, or they are so burnt out they no longer care. Sometimes keeping a professional emotional distance is the only way some medics can stay sane. I understand that.
However I don't understand callousness or judgemental behaviour's and attitudes. The man who cared for his partner so splendidly is an angel.

That's beautiful. My condolences to your friend at the loss of his partner.

Re: jerky doctors - someday I'll write down the story of the horrible anesthesiologist who as I was settling in for open heart surgery second-guessed my cardiologist and acted as if I was going in for a frivolous boob job. I got my revenge and complained to the senior management of the hospital, and added "Esq." to the end of my signature.
-Corene (Eric's former coworker)

This really is one of the most profound posts. I think you have put your finger on what separates good from great physicians--the ability to be in the presence of our patient's suffering, somehow let the patient know that we acknowledge the suffering, and do
whatever is possible to ease it. Thank you. RuralObGyn

Great Post! Here is what I commented on Kevin MD's site about your post: I do not think you can "train" doctors, or nurses for that matter, to have empathy. You certainly can role-model it however. A class or lecture on empathy is meaningless. It would be much more powerful to show true compassion to a patient while you are at their bedside, with the medical students at your side. If doctors have to "build up layers of arrogance, insensitivity, and cynicism in order to function", then there is something seriously wrong with the state of medical education. Who is helping these young doctors deal themselves with the suffering of human life they see day in and day out? My guess is no one is.

Well, I've worked critical care as an RN for 30 years. Took a break to care for mom and to have an abdominoplasty. Well the first shock was in pre op no privacy, a little curtain to strip and get into the cold gurney. The nurse came in to ask questions and I saw the anesthesiologist clearly annoyed waiting to interview me. This started the nervousness. I had had 2 hiatal hernias with the past a mesh repair. So, I just wanted to get that across. Didn't want to hear it. This repair was associated with having a lap band. So I tried to tell him that. He said, sternly I have questions to ask and you will answer them. And I said, and I want a new anesthesioloist. He threw the chart on the bed and walked out. a more pleasant one appeared.I said I have 2 thins to tell you and I'm all yours. I've told the story a several times and am very surprised that people, inc nurses say wow, I couldn't do that. If you can't trust them when your awake, why would you want him to put you to sleep. Curious does this happen more than reported.

"Calvary-ready" is an amazing phrase! It really conveys a depth of meaning that goes way beyond the usual stuff about compassion/empathy. Just want to sit with that for awhile.