When I was examining a patient in the preop holding area over the weekend I noticed a soft murmur with the early part of each heart beat, with a little vibrato or buzz to it, in the area of the mitral valve. "I think she's got mitral regurgitation. Is it in there?" I asked the nurse, who was leafing through the chart next to me. I didn't recall any mention of the condition on any documented history or physical exam when I was going through the chart, but I might have missed it.
"Nothing in here about that. What exactly do you hear? Can I listen?"
I held the end of the stethoscope down to what I thought was the best spot and gave her the ear pieces. "Just sounds like a regular heart beat to me," she said.
I listened again. The murmur was there, a blowing sound in the background. "It's about a Grade II," I said.
"I don't know what that is. What does it sound like?"
I thought for a moment about how to describe it. Then I put the thumb-side of my fist up to my lips and said, "It sounds like someone's doing this in the background with each beat." I blew into my fist with a recurrent foo-foo-foo sound.
She listened again. "Oh my gosh...now I hear it!" she said. "I would never have picked that up if you hadn't told me what to listen for!" 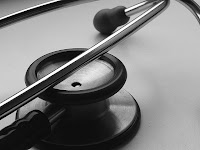 Heart murmurs have been cropping up everywhere at work lately. I think I've asked patients three times in the last week, "Has anyone ever mentioned to you that you have a murmur?" Part of the reason, I think, is that long-standing murmurs are inadequately described and documented in the preop clinic, while new ones are getting blown-off (so to speak) and inadequately pursued in terms of work-up. Then there was the day the surgeon announced during our seventh of eight cases, "By the way, about the emergency add-on after this? The patient has severe aortic stenosis. Just thought I'd let you know." Gee, thanks. Now that I know the valve through which her heart's trying to pump blood to the rest of her body is practically closed off, and if she goes into cardiac arrest on the table CPR won't do jack for her, I can't wait to do the case.
Despite the challenges presented by heart valve problems, I have to admit they've always held a kind of mystique for me. I loved learning the physiologic implications of each lesion, and in medical school, getting a handle on the different sound for each type of murmur. Learning to recognize and differentiate among the different murmurs felt to me like decoding a cipher, and gaining access to certain mysteries, the secrets of the body, and of medicine. It was a lot of med student euphoria, of course, because the truth is, heart disease can be inscrutable at times, and its management tricky, requiring a lot more than just a nice stethoscope and a few textbook facts. But how I treasured that first stethoscope in med school, a beautiful navy blue Littmann Cardiology III! It was my portal to a connection with others, through the sounds of their breath and their heart valves closing against each other, beating time to the rhythm of their lives, every moment, as they ate and slept and worked and rested.
***
The "heart room" or cardiac surgery suite had a certain mystique about it too. During residency I never lost the sense of awe over what we tried to do for people in there. On the anesthesia team work began long before the surgeons ever got in the room. Our responsibilities included placing monitors, central lines, arterial lines, and breathing tubes (here I am going for the jugular at the start of one of these cases). 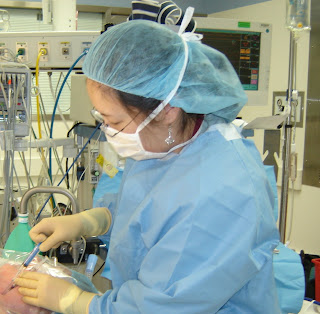 We were also responsible for designing and executing an anesthetic that wouldn't make the patient crash, that would take into account the individual problems his or her particular heart condition presented (they weren't all the same), and that would allow the patient to survive having his or her heart stopped, body practically frozen, lungs deflated, chest cracked open, heart restarted, heart contractions assisted by drug infusions we had prepared if necessary, and vital signs hurled from one extreme to another. I never got over the tension of looking over the drape to watch for those first contractions after coming off bypass, and I felt like exclaiming hallelujah every time the heart muscle began to move in a recognizable way. Often the fun was just about to begin, as we scrambled to assess quickly how well those contractions were doing, how much we needed to interfere chemically or electrically to help them along. 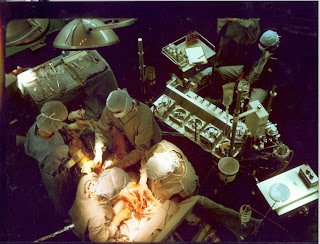 It's ironic to me that one of the most memorable surgeons I ever encountered during my training was a cardiac surgeon whose verbal aggression in the O.R. had become legendary. Some of the details may have morphed into legend too by now, but I relate them to the best of my recollection. When I heard about this man's reputation I was terrified of working with him as the lowly anesthesia resident behind the drape. One of the "legends" was that he once yelled at the cardiothoracic fellow at the top of his lungs, "This is all f___d up, you f___ing f___, now unf___ it!" Another anesthesia resident a year or so ahead of me said he had once asked this surgeon if he lived on a farm, because the conversation had somehow gotten onto the subject of wild turkey sightings in his yard, and the surgeon turned to the hapless anesthesia resident and replied, "No, you little sh___, I live in Brookline!" And I witnessed some very similar statements from this surgeon, so these stories were entirely believable to me. Once when I had my hands full and couldn't raise the O.R. table up immediately after he asked, he started to do his thing with, "What does it take to get this g__d___ table up and over, g__d___ it?!" I peered over the drape at him and gave him a little lip back, and ever since then if we ran into each other seeing patients preoperatively he'd actually give a nod in greeting, and once even patted me on the shoulder (eew, eew, cooties from Satan!) on his way out of the room. I hated the way he spoke to his residents and fellows, but he was an amazing surgeon; if my loved ones needed valves replaced, I'd want his hands sewing them in. What to do with that?

***
Several days ago a 6-year-old girl from my son's school ran into her father's arms after playing in a soccer game, collapsed, and died. The press alluded vaguely to known pre-existing heart problems. Our community is stunned and deeply saddened. Yet, to my horror, I've already seen nasty, prejudiced, hateful judgments from people eager to assign blame without knowing the facts. Why are people like that? I have to include a quote here on the subject, from some experts (Oded Bar-Or & Thomas W. Rowland, authors of Pediatric Exercise Medicine: From Physiologic Principles to Health Care Application): “It is important that children with congenital heart defects be encouraged to participate in physical activities to the safe limits of their capabilities. The need is not simply to optimize physical and psychosocial development but also to provide the long-term benefits of regular activity in preventing adult cardiovascular disease.”
We can learn how to hear, and sometimes repair, hearts that are physically broken. But we stumble over the human heart shattered by unbearable loss. I've seen it: people react to other people's pain with fear, blame, or avoidance. I did the same during a simulator exercise in medical school: confronted with an actor's make-believe suffering, I practically bolted out of the room as fast as I could. I got very depressed thinking, what kind of doctor would I make if I couldn't look a pained person in the eye, hold his hand, stick by him long enough to be of real help? I think I still have to face this tightrope every day, the one that leads across to the bedside of a suffering human being, and though it can still be a little scary, I hope my balance has improved over the years... 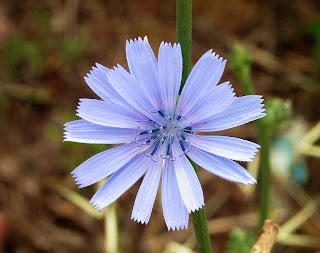 Thank you for this insight into the heart.

I have this same issue. I'm currently in med school. We have those standardized patients... I also have a problem in dealing with those issues in real life. A colleague of mine cried in front of me when we talked about relationship problems. I just changed subjects and avoid those topics later on. I need to change the way i'm behaving, but it's hard.

Thanks for stopping by! Having gotten through the long, dark tunnel and come out the other side, I can give you this encouraging word: it does get better with experience, practice, and attentive/mindful work.

One of the most helpful things I discovered in the process was developing a level of comfort with silence and touch, trusting that you don't always have to say anything to communicate support for another. Another helpful thing is really knowing your stuff, so that you don't have to worry or even think about explanations or the next decision when those are what would help a patient most. One last helpful thing I found was eye contact: it can actually help dispel fear.

Believe it or not, when you have "real" patients for whose care you really are responsible, something turns inside and you just pull it together, in part because you have to, but also because you realize: this is it; this is what I've chosen, what I care about, and I'm here to do it right.

Good luck with school! Take time to stop and smell the flowers! :)

The post was good, but your response to Steph is graceful and gracious at once. Wow. I bet you're some teacher for your med students and residents.

Bardiac, I can't tell you how much your compliment means to me. Thank you from the bottom of my heart.