Happy Ether Day... though I have to admit, Ether Day always makes me a little sad. It makes me think of how merciless the academic world can be, and of poor Horace Wells. But I'm skipping ahead.

On this day, October 16, in 1846, William T.G. Morton used a sponge soaked with ether to anesthetize Gilbert Abbott, a Boston printer. Surgeon John Collins Warren removed a tumor from below Abbott's jaw. When Abbott emerged from the anesthetic and reported having felt no pain during the procedure, Warren turned to the audience and said, "Gentlemen, this is no humbug." This was a reference to the awful Horace Wells incident. But again, I'm ahead of myself.

Ether Day was the most famous public demonstration of a general anesthetic but by no means the first, nor was it the first use of general anesthesia for surgery or the first medicinal use of ether. In March of 1842 Crawford Long used ether as an anesthetic to remove a sebaceous cyst from the neck of his patient, James Venable but did not publish his work until 1848 in The Southern Medical and Surgical Journal.

Nitrous oxide, or laughing gas, too, had already been publicly demonstrated in circus sideshows before the demonstration at Mass General took place. On December 10, 1844, a travelling lecturer and former medical student named Gardner Quincy Colton, who had already earned $535 with his nitrous oxide demonstrations, gave a show in Hartford, CT during which a volunteer from the audience felt no pain from an injured leg. Dentist Horace Wells was there. His interest in developing an anesthetic technique for dental practice inspired him to procure a supply of the gas from Colton. He began to administer nitrous oxide to his dental patients.


Before Morton demonstrated ether anesthesia at Mass General on Ether Day, Horace Wells had tried a similar demonstration in Boston over a year before, using nitrous oxide. It was a disaster.


I have always had a soft spot for Horace Wells because of this, because I know what it's like to be on the spot publicly, in front of a bunch of academics who are not necessarily on your side and seem to be just waiting for you to screw up. I've observed on many occasions that, in many instances, academics are people for whom making intelligent remarks about something consists of pointing out what's wrong with the thing, often with great relish and self-satisfaction. 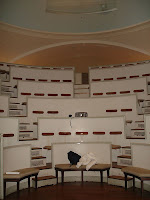 Of course, I've also known truly great academics, those who are knowledgeable and can communicate their knowledge with a sense of joy and excitement rather than superiority, who are creative and open-minded, capable of enjoying a piece of music or theater without nitpicking, willing to admit they have more to learn, and in fact able to learn from others. I have a feeling this was not the type of academic Horace Wells was up against when he tried to demonstrate that nitrous oxide could be used as an anesthetic. In January of 1845, before a critical and demanding audience of medical students at Mass General, apparently something went wrong with the way the gas was administered, and the patient cried out in pain. Wells was publicly humiliated, with the students jeering "Humbug! Humbug!" as he left the auditiorium, and he lost his credibility within the medical community. After this miserable failure he became a traveling salesman and sold canaries, shower baths, and other household goods for the next two years.

I think it's interesting that William T.G. Morton had been Wells' student and then business partner in the early 1840's, when Wells first set up his practice in Hartford. They went their separate ways after only a couple of years in dental practice together. In 1847, after Morton's success and notoriety as a result of Ether Day, Wells ended up working for his former student: he went to Paris to sell anesthesia for Morton, who tried for years to get royalties for his "discovery" of ether anesthesia. Wells became addicted to chloroform while in Europe, in a state of delirium assaulted two women with sulfuric acid, got committed to Tombs Prison in New York, and committed suicide by slitting an artery in his leg with a razor. He was only 33. 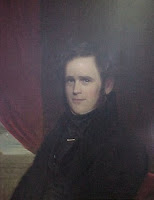 An article by A.J. Wright from the 1999 newsletter of the American Society of Anesthesiologists acknowledges, "Recent work by Stephen D. Small, M.D., has demonstrated that Wells was a deeply religious young man concerned 'with a reality that transcended intoxication, a dangerous idea without scientific proof that the inhalation of nitrous oxide could be pushed to levels heretofore unknown, with great benefit.' Here then is Wells' main contribution - 'to push the inhalation much farther than for a mere exhibition for fun.' Wells' motivation seems to have truly been the discovery of surgical pain relief, not an exotic experiment performed a few times and abandoned, as with Dr. Long, or a process to be patented for profit, as Morton tried to do."


On the ASA website people can order Crawford Long, Horace Wells, or William Morton T-shirts to cast their vote as to "who was first." I think they need to get Gardner Quincy Colton up there, a med school drop-out with no academic credentials. Actually, what I really think, banter aside, is that each Ether Day, what we need to reflect on is the way in which academic cruelty can destroy a person and rob us of his or her gifts. If those med students who were watching Horace Wells had replaced their jeers of contempt with supportive actions and educational questions, the result might have been much more productive use of everyone's work and perhaps much less unnecessary tragedy.

ADDENDUM FROM WIKIPEDIA:
"Twelve days before his death, the Parisian Medical Society had voted and honored [Horace Wells] as the first to discover and perform surgical operations without pain. In addition, he was elected an honorary member and awarded an honorary MD degree. However, Wells died unaware of these decisions." 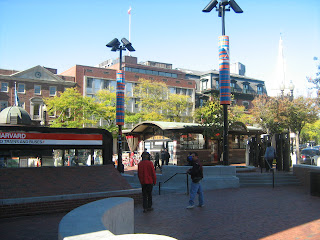 Speaking of academe, I spent Ether Day enjoying the beautiful fall weather in Harvard Square on a rare day off with my husband. We had lunch at Finale, which is known for its terrific desserts but deserves accolades for its delectable gourmet sandwiches too.

"What did we used to talk about when we hung out here when we were younger?" I asked him as we ate our sandwiches. The places around Harvard Square were our old stomping grounds.

"Well, what on earth could have brought us together at that age?" I wondered aloud. He and I have nothing in common, with the exception of some core spiritual values / ways of looking at the world. Nothing at all.

I think our being totally different, like two puzzle pieces with completely different shapes, helps our marriage. That, and we find each other funny. 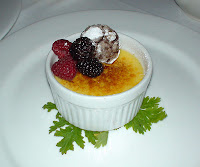 "Do you want my raspberry garnish?" The berries on my dessert were a little tart, but the crème brûlée was rhapsodic.

"Sure. Want my chocolate triangle?" He said, handing over the little wedge of dark chocolate from beside a delicious frangipane tart.

Ah, a marriage that works. Gotta love it.

Here's an Ether Timeline (by no means complete) for any who might be interested. I found a lot of the info here at bookrags and also compiled by Thomas J. Evans, CRNA, at the Anesthesia Nursing and Medicine Website:

1540: Valerius Cordus describes the synthesis of ether. Paracelsus discovers it has hypnotic properties.

1730: Frobenius changes the name of sweet vitriol to ether.

1804: Japanese physician Hanaoka Seishu used a bunch of scary plants to produce general anesthesia in a patient in need of surgery for breast cancer.

1818: Faraday, Davy's student, notes that like nitrous oxide, ether can produce analgesia and euphoria when inhaled.

1846: Ex-physician Charles T. Jackson suggests that Morton use ether for dental extractions. Morton does so and performs painless tooth extraction on Eben Frost in September. Ether Day in October.

1850's and 60's: Big fight between Morton and Jackson as to who "discovered" ether anesthesia. Long and Wells also with claims, though Long never tried to patent his use of ether for personal profit. 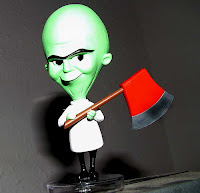 1944: Gregory Peck's character anesthetizes a boy with some drops in the film Keys of the Kingdom.

1952: Bugs Bunny episode "Water Water Every Hare" features a slow-motion chase between a mad scientist and Bugs who are in a semi-anesthetized stupor due to a broken ether bottle.
Posted by T. at 11:33 AM

Thanks for the history lesson in anesthesia. I found it to be very interesting. Great insights, too.

The more I read your blog, the more I am impressed by it. You're a great writer!

Really enjoyed this history lesson. I wonder how many talented people we lose like Mr Wells (such a loss there).

Thanks for your support, everyone! I am deeply grateful to know there a few folks out there that have found some enjoyment here.

lol. did you know that chocolate was banned in switzerland for many years. read this

colton is the samwise gamgee of the story for sure. the silent hero. Wells is the star and Morton the villian. I have been interested in this story since I was 19 and continue to scour around for information on Wells. Great article. Do you know where you can find his letter to the New york times?

I love that reading your blog let's me see the way the wheels turn in your brain. I will be nagging you soon to write again. Bravo