In the children's movie Madeline, whenever Frances McDormand's character had a worrisome gut feeling about something, the camera would do a close-up of her face as she uttered the line, "Something is not right." I like that recurring trope because I think we all have little moments like that, when in the reel of our day-to-day lives, some instinct or vibe causes us to slow down and knit our brows, to pause and take the time to be careful, to prepare for unexpected trouble.

I had a moment like that one day when I went to the preop area to see my next patient and was handed his chart.

The evaluation form from the preop clinic mentioned heart surgeries without going into a lot of detail. When I went to see the patient to investigate his situation better, I found him pale, almost greyish, the color of raw fish. His legs were completely swollen. He seemed, because of his cognitive limits, unable to formulate any helpful answers. Something was really not right. Here we had a middle-aged adult with the mental capacity of someone decades younger somehow expected to be in charge of his own condition, and I was sure there were some significant problems with that condition.

I found an old medical record with a cardiologist's note in it. I think I went pale reading it. There were phrases in it that signaled possible doom and the need to be prepared for battle. I tracked down his cardiologist, who happened to be in the O.R. area that day, and had a brief but intense conversation with him. Adding to all the "red flag" descriptions on the cardiology consult, he confirmed that the pulmonary valve was tight, tight, tight, and that the patient depended on the fluid entering his heart for whatever he managed to eject out of it to the rest of the body. Anesthesia could be very dangerous for this guy.

If I had been in a tertiary care center with cardiac bypass capability, once I was satisfied the patient was as good as he was going to get, health-wise, I might eventually have thrown up my hands and said to myself, oh well, when you gotta do it, you gotta do it. At least there's a perfusionist in the house, and lots of staff to help out. But there, at that little country hospital in the middle of dairy farm country, I took the surgeon aside and said to her, "Look, I know this isn't a huge operation, but it's not mandatory for the moment, and we shouldn't be doing it here. If anything happens to this guy on the table, I WILL NOT be able to resuscitate him." It killed me to say it. It was like an admission of failure. It hurt my pride. I knew how to take care of him; I just couldn't offer it there, in that setting. I had visions of big-shot anesthesia departments at academic centers looking at my referral of this patient to them as an act of cowardice or weakness rather than advocacy. But I swallowed my ego and pressed on. "He's a disaster waiting to happen, and we just don't have the resources." The surgeon agreed. The surgery was cancelled.

One of the most stressful things about my job is that you never know what you're gonna get, either from the people around you, or as a surgery unfolds before you. And if what you get is something baaaaaaaaad, you're supposed make it right. 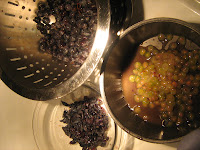 I've been doing a lot of mental grumbling lately. "Ugh, I'm on call again." "What? I can't have a moment to rest after a long day in the O.R. because we've run out of milk?!" "What do you mean we're out of leftovers? I have to cook?"

I'm making myself a rehab program: Grats for Gripes. I want to try to replace every griping thought or muttering I produce with a thought about something for which I'm really thankful, and which I tend to take for granted. 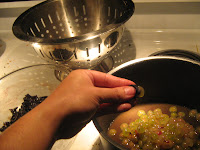 Tonight while I was preparing to make a Concord grape pie after a recipe by Rebecca Beaton, I started thinking about hands. That's my "grat" for the day: the wonder of the human hand. Our hands quite literally make us human. By acquiring the capacity to hold and change things with our intricate little interossei and lumbricals, we have developed all sorts of other abilities - affection, relationship, artistry, construction, destruction, a doctor's physical exam, a computer wiz's impact on communication, a chef's culinary creations. Our hands, like our faces and our language, give us a way to engage with the world that can transform our thinking and our way of life. I do take them for granted, and I know I shouldn't. 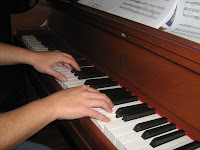 I went to chamber music rehearsal having shed a lot of my discontent of the last few busy, stressful, tiring days. Using my hands with others to bring to life the music of Pachelbel and Mozart tonight replaced all those negative neurotransmissions in my brain with lovely, endorphin-laden messages about what is in fact right about the world right now. Besides the Red Sox being in the World Series, that is...
Posted by T. at 6:46 PM

"I'm making myself a rehab program: Grats for Gripes. I want to try to replace every griping thought or muttering I produce with a thought about something for which I'm really thankful, and which I tend to take for granted."

Thank you T. Can I join?

Come on down! Would love to have you on board.

We're all allowed a bit of grumbling sometimes. Don't be so hard on yourself, your life is stressful enough.

Thanks for the word of support. For me, though, I actually think the grumbling INCREASES the stress! It would seem to release it at first, but I've actually found that feeding the negative energy makes it grow and swirl around and escalate...and insidiously creep into other parts of my life, so that there are days when I have only negative things to point out about almost everything. Ultimately not a helpful habit! But it's nice to hear from folks who understand...:)