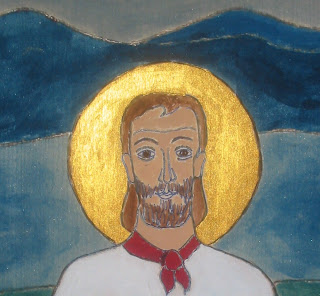 Today is the feast day of the patron saint of anesthetists: St. René Goupil. He was born in Saint-Martin-du-Bois, near Angers, in 1608, grew up to become a surgeon and a lay missionary to New France with the Jesuits, was captured by the Iroquois along with his close friend St. Isaac Jogues, tortured brutally for weeks, and finally tomahawked in 1642. By all accounts he was a sweet, gentle, humble person who showed tremendous patience in adversity, trust in God, kindness even for those who behaved cruelly toward him, and a willingness to work hard physically and spiritually to be of service to others in whatever capacity was needed, whether the task was menial or noble - a give-you-the-shirt-off-his-back kind of guy. Some nurse anesthetists in 1955 asked the Pope if he could be patron saint of anesthetists when one of their patients, a man named René, suggested it.
I painted an icon of René (portion above) that I modeled a little bit after the character of Gabriel in the movie The Mission. I tried to hint at the landscape around Lake Champlain and the St. Lawrence River and to use color symbolically, the way "real" iconographers do - white for his purity of heart and intention, red for his violent death, greens and blues for life and sacredness. I'm not satisfied with it, of course, and will probably do it over some time.
This may sound strange coming from someone who's supposed to exalt science and rationalism by profession, but I think René takes this posthumous assignment to heart. I have a feeling that as a "spirit guide" - do all Native American cultures hold a belief in spirit guides, or only some? I'd love to learn - he's the kind of guy who'll go out of his way to help anyone who asks, anesthetist or not, anesthesia-related concern or not. Just as he was in life. Frankly, I don't think he gets a lot of customers, which doubles my affection for the guy.

***
Once in a while we get in the O.R. or ICU what every anesthesiologist dreads more than anything: an "unanticipated difficult airway." I had one just yesterday, and boy, was my heart racing. The trouble, too , with keeping a cool exterior is that sometimes even if you say the words, "This is going to be really hard, guys, it's bad," people around you don't get how bad the situation is. I switched laryngoscope blades, repositioned the patient's head, did all the things I was trained to do, but I absolutely could not see the vocal cords through which I was supposed to place the necessary breathing tube. Moreover, I could tell just looking deep into the mouth that no amount of adjusting was going to reveal those cords. The patient's oxygen saturation was dropping. I needed to find the right spot and place the tube fast, by feel and not by sight, with the hope that my educated suppositions about the patient's anatomy would serve me well; otherwise I was going to have to either ventilate him some other way or get him awake again quickly. No, I didn't say a prayer. In fact, I don't think I had any complicated thoughts in my head at all; just monosyllablic commands to myself: In. Up. Up more. Come on. Just do it. I was the only person in that room who knew how to do this. In fact, I was the only anesthesiologist around for miles. I was basically alone with the worst airway I had seen in months.
Or was I? Are we ever really alone?
I was talking to an atheist acquaintance this past summer about the tsunami tragedies and she affirmed her own faith: "I don't think we human beings are alone at all." Even if all that happens after we die is decomposition, if God and saints are vain dreams of wishful minds, if our faith turns out to be far from the truth, if the people around us who are supposed to be helping us fail to understand, or to come to our aid - are we alone? Because that, I think, is many people's biggest fear. Loss of loved ones, separation, suffering, death, loss of consciousness to anesthesia by another's hand - fear of these, I think, is ultimately fear of being totally cut off and isolated, trapped apart from contact with the living.
Yesterday's patient had somebody pullin' for him, that's for sure. The breathing tube went into the right place.

I wrote this for any fellow-Catholic anesthesiologists out there who believe prayer is for transforming ourselves rather than transforming the will of God (an idea I first read in C.S. Lewis's stuff), and for those who enjoy talking to dead people. :)

Dear René,
Help me keep my patients safe
and bring solace to those who suffer.
Help me prepare for any challenge,
Think clearly,
Understand completely,
Remember exactly,
Act appropriately,
Work productively,
Express myself well,
And be for those near me
A source of Christ’s love. Amen.
Posted by T. at 10:17 PM

Hi T,
I was struck by your post about the patient with the challenging airway anatomy, and in particular your comment that you couldn't see the vocal chords and had to just feel for them, or maybe better, know that what you expected to be there would be. I am reminded that "We Walk By Faith and Not By Sight." Now if this principle only applied to my profession...

Beautiful post! I'm fascinated by all the Patron Saints, especially since my strange coincidences involving Saint Theresa, which inspired me to write a post.

You've written a beautiful prayer here. And I have to say that reading your blog always makes me feel better.

Funny - I had that very song ("We Walk By Faith and Not By Sight") stuck in my head right after I wrote the post! Now I realize why...

Your profession is indeed a tough one in terms of walking by faith...I could never do it! The profession is fortunate to have such a thoughtful practitioner among its members.

Anali, nice to hear from you! I totally loved your post about Therese the Little Flower, as we Catholics affectionately call her. Her autobiography, Story of a Soul, has some nice passages, and I recall a bio for children about her, entitled Little Flower by Mary Fabean Windeatt, that really influenced me while I was growing up.

René is associated in my mind with MANY of those happy "coincidences..." Funny how that works...!