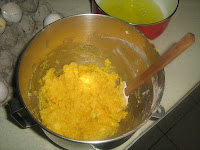 My Tita M had me over to connect me to my Pampango family heritage and learn a little about making our delectable ensaymadas.
My great-grandmother Brigida made ensaymadas and sold them on the church steps after Mass for a living (in Angeles City, though, not at the church pictured, which is the church of San Agustin in the old city of Manila). She had 17 children, 4 of whom died, 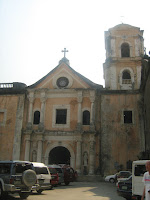 and by all accounts she was as good a woman as good can be. By the time people asked her how to make her delicious, golden ensaymadas, inflation had made her answers hard to decipher: cinco centavos of this and diez of that no longer bought the same volumes as they had when she was working full-time. She lived to be about a hundred; her funeral was the first I ever attended.

What I can say about the process is this: it's not that hard, but it's not that easy, either. There's a lot of kneading and waiting, at least three separate dough risings, and a great deal of rolling out, rolling up, weighing, and buttering. Oh, is there ever a lot of buttering.

I think I have to try never, ever to make these for myself! 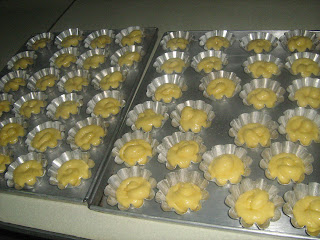 The best part of the whole process was story-telling with my Tita M. She's smart and funny and a pleasure to be with, and her stories kept me either wide-eyed with interest or laughing my head off all day.
I've appreciated the chance to reconnect with my native culture this trip. I often focus on the things I criticize about it - the tendency for people to be a little too enmeshed, and at times

infantilized; the lack of privacy; the occasional small-mindedness; the petty hostilities, class separation, and judgments. But in these past 3 weeks I've been able to rediscover what I appreciate about it: the way people help each other during tough times, are generous almost to a fault, are so ready to laugh, and are comfortable with touch and affection. Here a man can walk home with his arm around another man's shoulder simply because they are friends.
In our particular town, too, thanks in part to the efforts of our close family friends who are in charge of a lot of commerce in the area, Muslims and Christians seem to be able to coexist peacefully. Perhaps that is the most striking image I'll carry with me: that of the flea market crowded with People of the Book living and working together with no need for violence.
Posted by T. at 5:55 PM