Not Even the Most Frustrating Conversation Of the Week, But Unbelievable Nevertheless 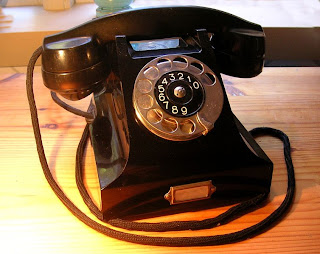 (Reconstruction of an actual phone conversation overheard at the main O.R. desk.)
Doctor In Charge of Administrative Stuff (DICAS): Who writes the orders for blood transfusions in the O.R.?
O.R. Nurse: No one.
DICAS: You mean blood is getting hung with no orders?!
O.R. Nurse: The anesthesiologists give it. They don't write an order for it.
DICAS: Why not?
O.R. Nurse: Because it's part of anesthesia care. They ask for it. We get it. They give it.
DICAS: Who actually hangs the blood?
O.R. Nurse: Anesthesia. It's their decision, based on preop crit, blood loss, and vital signs.
DICAS: Well, as of today, they're going to have to write an order for that.
O.R. Nurse: But who would they write the order to? It's just like when they give fentanyl or pressors - it wouldn't make sense for them to write themselves orders to give a medication every time they assess the vital signs and decide the medication is warranted.
DICAS: That's not the same thing.
O.R. Nurse: Of course it's the same thing!
DICAS: No. Blood transfusions can kill people.
O.R. Nurse: The drugs they use can kill people too! And who's supposed to pick up the order?
DICAS: I don't give a sh___. That practice is going to change as of today. If there are no orders written, then there's no way of knowing who's responsible for giving the blood and causing the reaction.
O.R. Nurse: Of course there is! The anesthesiologists document it on their record! They sign the blood sheet!
DICAS: No, they don't. I have a medical record right here...(leafs through record to find blood administration sheet...remains silent for a moment. We imagine it's because he's gazing at the anesthesiologist's prominent signature on the blood administration sheet).
Anesthesiologist (from the sidelines): Remind him that life-threatening transfusion reactions occur in, like, 1 out of about 250- to 600,000 patients REGARDLESS of who orders the blood transfusion, so creating a measure for the purpose of assigning blame is an ignorant and asinine thing to do.
DICAS (on phone, to O.R. nurse): What is your name, exactly?
O.R. Nurse: Brillia. Brillia Sensemaker.
DICAS: Well, Brillia, I'm going to take this up with the Vice President.
Vice President (minutes later, on the phone): So, why aren't orders written for blood given in the O.R.?
O.R. Nurse: Because it's part of anesthesia's care. The doctors make the decision to transfuse based on what the patient needs right at that moment.
Vice President: Don't the nurses then carry out the decision?
O.R. Nurse: No. The anesthesiologist hangs the blood after a nurse double-checks the label with him or her. It wouldn't make sense for the anesthesiologist to write an order to herself for something she's decided to carry out.
Vice President: Hmm...you're right.
O.R. Nurse: (Catches anesthesiologist's eye, thinking they've gotten somewhere).
Vice President: But it's going to change anyway. DICAS wants an order written every time blood is transfused in the O.R.
O.R. Nurse: An order to whom? To self?
Sigh. Why is it that people who have no understanding of what goes on clinically in the O.R. are allowed to make dictatorial decisions about the O.R.?
______________________________________________________
For another great peek into the headaches of being unjustifiably strong-armed by the administrative side, please see this well-done post at Dr. Val and the Voice of Reason.
Posted by T. at 6:52 PM

As my husband likes to say when he encounts such nonsense, "You can't make this stuff up"

This stuff comes in cycles like Hurricanes or Global Warming. You're lucky he's not requiring written Prescriptions for every cc of Fentanyl, its a Schedule II drug!

I hope that doesn't make the rounds to everyone's hospitals. Sometimes it's hard enough to GET the blood in the middle of the night for an unstable trauma patient. If blood bank gets wind that there has to be a written order......well, It won't look good for patients.

Who's on First
What's on Second
I Don't Know's on Third

Totally exasperating. Thanks for the link to my blog post! :)

Unbelievable. Write an order to yourself? Sheesh.

Who was this? So TANGA!

MH - I emailed you just now. You'll understand when you see...