As evening approached the recovery room was down to its last patient. The patient's blood sugar post-op was alarmingly high, and I was working with the on-call nurse to change some orders, order labs, and make sure we didn't have florid ketoacidosis on our hands. The rest of the nurses were just about to leave for the day but had gathered around the computer behind the desk in the recovery room. Occasional murmurs of admiration arose from among them. I went to the desk to look at a blood gas (normal, thank goodness) and asked them what they were looking at all huddled around the screen.
"Oh, nothing...just Michael Phelps' iliac crest. And some cute tattoos."
"Iliac crest my foot!" I teased. "I think I know you guys a little better than that. Are you sure you don't mean his anterior superior iliac spine?"
I went around the desk to sneak a peek.
Oh, that wasn't his iliac crest they were looking at. Or his anterior superior iliac spines.
"Whoa, that's actually his inguinal canal, y'all," I said, dramatically hiding my eyes in mock modesty. "And Trudi, what's your lovely French-manicured hand doing on his rectus abdominis?!"
"Lemme tell ya," said one of the nurses, "We'd be happy to take care of his inguinal canal or his rectus abdominis in this recovery room any time!" 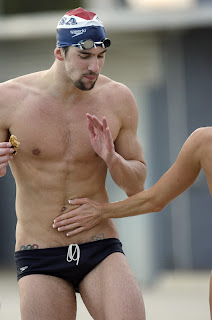 (Photo credit:
http://3.bp.blogspot.com/_hE0TRpE-p8U/R8Hamg_9AcI/AAAAAAAACw8/gfpemQ1uQ3g/s1600-h/phelps.jpg)
I had to laugh with them. "I'd just be happy if I could eat that much every day - three fried-egg sandwiches AND a 5-egg omelette AND french toast AND chocolate chip pancakes AND grits for breakfast alone? And an ENTIRE BOX of pasta for lunch AND for dinner, each? Sheesh!"
"I don't think I could burn 12,000 calories in a year, much less a day," another nurse chimed in.
Fun aside, I have an Olympic favorite myself. I love Shawn Johnson. She is to gymnastics what I want to be in medicine: consistent, reliable, stellar, down-to-earth, and able to stay calm and grounded under pressure, and really deliver when her gifts are most needed. I think this picture epitomizes her grace and poise and her ability to enter that zone where no one can ruffle her. (Photo credit: http://www.gymnasticsmedia.com/Gympedia/tabid/332/topic/Shawn+Johnson/Default.aspx). 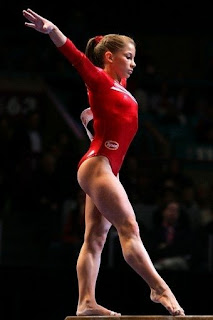 My favorite gymnast from the last Olympics, Catalina Ponor, had it too. I don't know what their secret is, how they enter that sacred zone of strength and courage, but that's exactly where I need to be when I'm at a patient's side in the O.R., especially when the going gets rough.
I have never been good at sports, but there are certain skills athletes have from which people of all professions can learn. An athlete, from the Greek word athlos, or contest, is one who competes; medicine requires a kind of mental and spiritual athletics, in which one enters a life-long contest against wounds, illness, and death as well as against one's own deepest weaknesses - the impulse to hide from others' suffering, to judge others, to get impatient, fearful, fatigued, or cynical...all the things that are like a kind of lactic acid build-up for the mind and heart. I think it's worthwhile to set aside moments to enjoy and marvel at the Olympics even when closer to home there are pressing priorities. Our young heroes have the power to inspire, and that periodic inspiration may be the just the boluses of energy we all need to keep our own torches lit.
Posted by T. at 1:41 AM

I wonder how many other readers looked up inguinal canal and rectus abdominis. : )

I must confess, it's a very real pleasure for a health care worker to admire - in only the most reverential, almost awe-struck way, mind you - near-perfect anatomy in a young healthy person. It's a hospital after all - almost no one's exterior landmarks are as easy to appreciate as the textbooks would have us believe!

It's nice to be reminded every once in a while that the human body that we spend our lives trying to nurture and heal, under all the scars and disease process that come to our door, is really such a beautiful marvel at its healthiest and best.

You mean "appreciate" in both senses, right?

I don't even want to think what the nurses etc would have to say about my body, but I'm thinking it wouldn't have to do with appreciation of any sort. :(

And can I say, that's a tiny little speedo he's got on there.

I feel I should reassure you that docs and nurses usually have little or nothing to say about ANYONE's body - after seeing the first thousand or so, almost NOTHING is remarkable and almost EVERYTHING is average and not comment-inspiring in any way. Unless it's a real outlier, and then the comments usually only have to do with whether the body in question presents particular clinical problems or not - skinny, fragile veins, for instance, or a very stiff neck that needs extra cushioning, etc.

An Olympic athlete's physique, though, is enough of an outlier to make us take notice...with deep admiration and considerable envy! :)